Frank Owen Southwell belonged to a prominent pioneering family in the Hall District, NSW where he was born in 1887. His father, known as 'Captain' Sam Southwell, and his mother settled at Woodburn to the north west of Hall in 1881. Southwell enlisted in December 1915 and served in France with the 13th Battalion near Flers on the Somme during the winter of 1916. After four months in the mud and cold at the front, Southwell developed trench foot. In February 1917, he was evacuated to England for treatment and was invalided home later that year.

Southwell married Florence Munday from Hall in March 1919 at the Wattle Park Methodist Church. They moved to Lithgow, NSW where Southwell worked at a small arms factory as a turret lathe operator for the next nine years.

Despite growing up locally on the land and being described as "sober, honest and upright", Southwell was unable to obtain a rural lease until he purchased Blocks 8 and 8A in 1928. The 453 acre (183 hectare) Belconnen Block 8 and the 205 acre (83 hectare) Belconnen Block 8A were originally leased to William Tickner in 1923. On the 20th July 1928, Tickner transferred them both to Southwell.

Belconnen Block 8 was an area at the northern end of the suburb of Dunlop with the ACT/NSW border forming the western boundary. Most of the block is now part of the Dunlop Grasslands Nature Reserve. A 1949 report on its suitability for dairying describes it as being:

"Devoid of watercourses and depends entirely on dams for water supplies. The topography is flat along the north western sector, rising to slightly undulating to steeply undulating towards the south eastern sector. The south eastern corner of the Block is sparsely timbered, the remainder being cleared. All flat and slightly undulating land will be suitable for cultivation of cereal crops and the whole area suitable for pasture improvement. The soil is of volcanic origin with approximately 12 inches of surface soil having a Ph of 5.5 to 6.0." 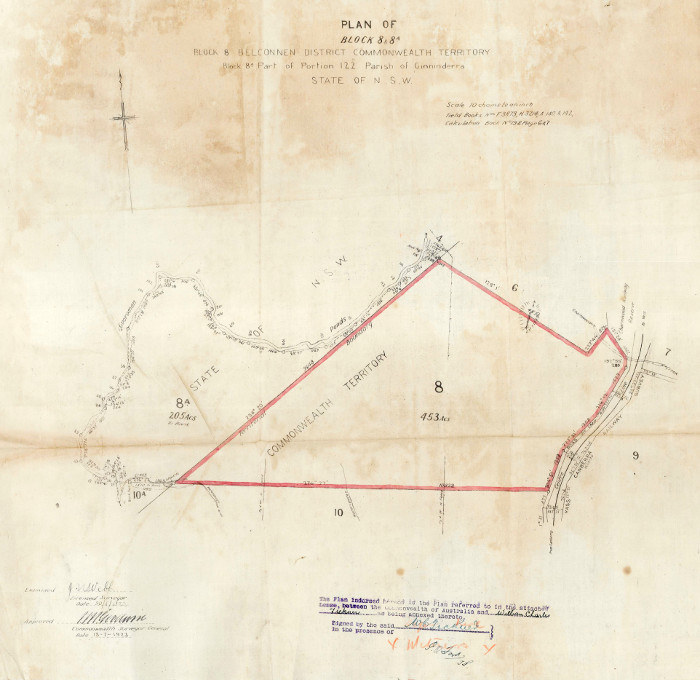 Plan of Belconnen Blocks 8 & 8A. Click on plan for larger view.

Belconnen Block 8A was a continuation of Block 8 into New South Wales as far as the creek known as Gooromon Ponds. The same report described Gooromon Ponds as:

"A doubtful permanent water course. The land is flat to undulating and devoid of trees for both shade and shelter. Appreciable areas of erosion were noted."

Southwell's property was known as Crowajingalong and his home was north of Binns Street, Fraser near the site of the original 1833 Charnwood homestead of Henry Hall.

Unfortunately, Southwell had purchased the property at the height of the post war boom with financial assistance from one of his brothers. He struggled financially as prices for wheat and wool fell with the onset of the Depression and he fell behind in paying rent on his lease. In 1931, he had 40 to 50 tons of hay he hoped to sell to reduce the arrears. However, he found it impossible to harvest as the block was:

"So boggy to get a machine near it. Last seasons wheat crop was practically a failure owing to rust as it averaged about 2 bags to the acre." 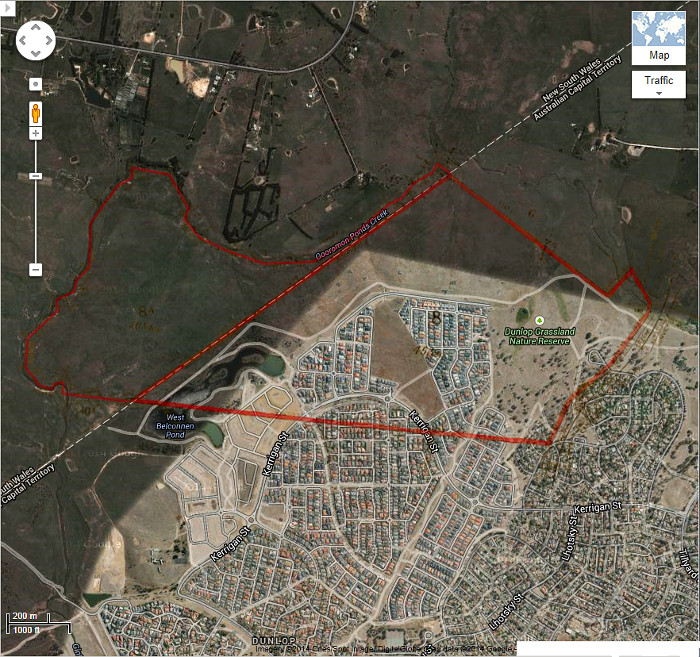 Google Maps image of area c2013 with Belconnen Blocks 8 & 8A boundaries in red.

In April 1932, Southwell was so despondent about his prospects that he felt he was:

"Absolutely at the mercy of the Commission in the matter, as I can do nothing towards meeting the account if legal proceedings are taken. After fighting for the Country and fighting for a living ever since with a handicap of Mrs. Southwell in bad health for years, I am about disheartened, and don't seem to see that it matters a great deal what happens. I have lived honestly all my life and paid every man while I was able, but now I can do no more. So I will just leave myself to the discretion of the powers that be."

"One cannot read Mr. Southwell's letter without feeling very sorry for him" he wrote, for "as a man and a lessee I am informed that he is everything that is desirable, but, like many other good men who were insecurely established on the land when the crisis came, he is up against it, and from the tone of his letter, can see no prospect of retrieving the situation."

And yet Southwell survived. Like other lessees, he was given temporary rebates and a reduction in rent from the original £135/18 to £100 per annum on Belconnen Block 8. When he renewed his lease in 1948, the annual rent was still only £100/0/9.

Southwell retired from Crowajingalong in 1956 and moved to Canberra. He died on the 18th October 1973 in Canberra aged 85 years old.