Photograph of the 1930 Canberra Advisory Council

In May of 1930 the Federal Capital Commission was abolished and replaced by the Canberra Advisory Council that first met on the 29th of May 1930.

According to the minutes, the attendees of the first meeting were:

A brief history of the Council is recorded in the book ‘Canberra 1913-1953’ by Jim Gibbney (1) with the following captioned photograph on page 162: 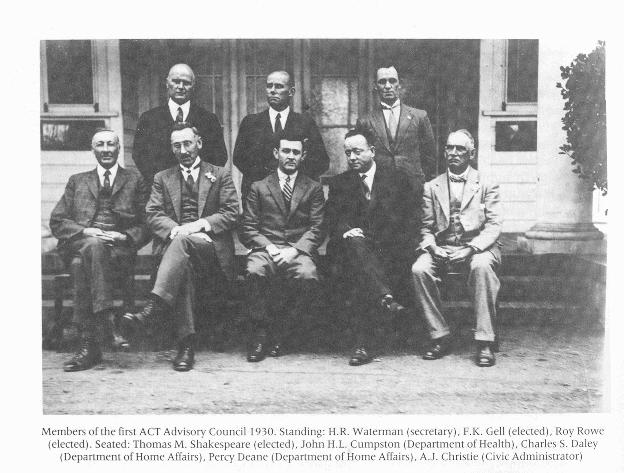 The Territory Records Office (TRO) holds a framed print of a similar portrait (note the different head position of Percy Deane, front row second from the right).  This photo can be viewed by contacting the ArchivesACT Reading Room.  Both the Legislative Assembly and the Canberra and District Historical Society (CDHS) hold smaller original prints of the same photo.  Below is the CDHS copy (reproduced with their permission): The quandary is which of these captions is correct?

As can be seen in the CDHS copy, the photographs were taken by Alexander Collingridge who worked as a commercial photographer in Canberra from the mid 1920s until his death in 1942.  Unfortunately the names written on this photograph appear to be in different hand writing so it does not conclusively prove that this caption is correct.

The identity of most of the Council members can be confirmed from other portraits taken of them.  These can be viewed online by clicking on their names below:

The National Archives of Australia has portrait of A.J. Christie (7) where he does look similar to gentleman in the light coloured suit, however in the following portrait taken in 1929 Christie looks somewhat different. 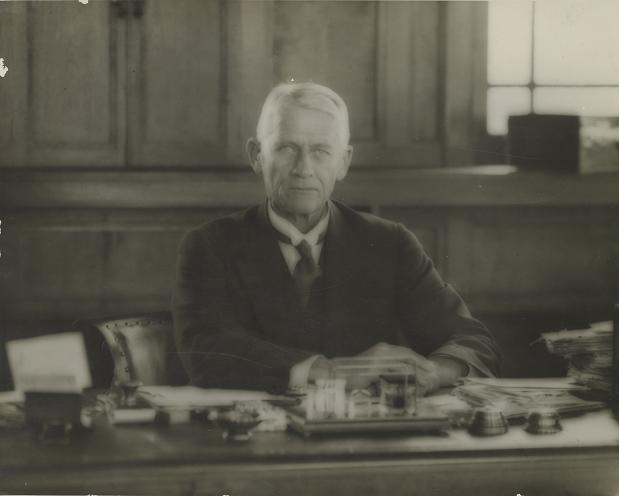 In particular note that Christie still has some hair on his forehead in the above photo while one year later the gentleman in the Council photo below does not. 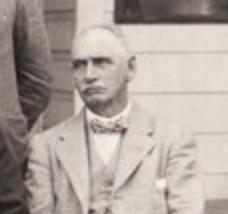 Another handwritten note can be found on the top left corner on the back of the copy held by the Legislative Assembly (below).  It reads:  15 Sept. G P M for ident.   This note may indicate the photograph was taken on the 15th of September but once again the note cannot be identified as being written by photographer. Several documents related to the Canberra Advisory Council exist documenting the Council’s activities.  These include the personal papers of A.J. Christie held by The State Library of Victoria which we sourced his portrait from (8).

The most informative documents we found were the ‘ACT Advisory Council Minutes nos. 1-50, 1930-33’ held by the National Library of Australia (9).  From these we discovered the following:

A.J Christie was the Council’s Chairman for its first six sittings, 29 May to 28 July 1930, after which he stepped down as he was leaving Canberra.  It was announced at the 28 July meeting that C.S. Daley would move from the position of Secretary to Chairman.  At the following meeting on 25 August 1930, H.R. Waterman was elected Secretary.

None of this proves that the names associated with either photograph are correct; however it does cast doubt on the accuracy of the Gibbney’s caption as we can surmise the following:

H.R. Waterman was not Secretary when A.J Christie was on the Council.

P.A. Gourgaud is not listed in Gibbney’s caption yet he was a member of the first Canberra Advisory Council.

We have been unsuccessful in finding any alternative portraits of F.K. Gell.  Such a portrait would be conclusive proof of this gentleman’s identity.  If you happen to have a portrait of Frederick Keith Gell please contact ArchivesACT as we would be greatly interested in seeing it.

As it is we are leaning towards the caption on the CDHS copy as being the correct one based on the Council’s Minutes and the slight difference in appearance of A.J. Christie in his portrait.

We have come across the following photo of the 1930 Advisory Council. This provides further confirmation that our identification of the Advisory Council is correct.

(4) Collingridge, A. (Alexander), d. 1942, Farewell to Prime Minister Scullin on the eve of his visit to London for the Imperial and Economic Conference, 13 August, 1930, National Library of Australia, 1930

(5) Portrait of Percy Deane, Secretary of the Department of Prime Minister and Cabinet, National Library of Australia, 192-?

(6) River Murray Commissioners and Staff before the first Commission meeting at the Department of Works and Railways in Melbourne on 14th February 1917, Murray-Darling Basin Commission, 1917