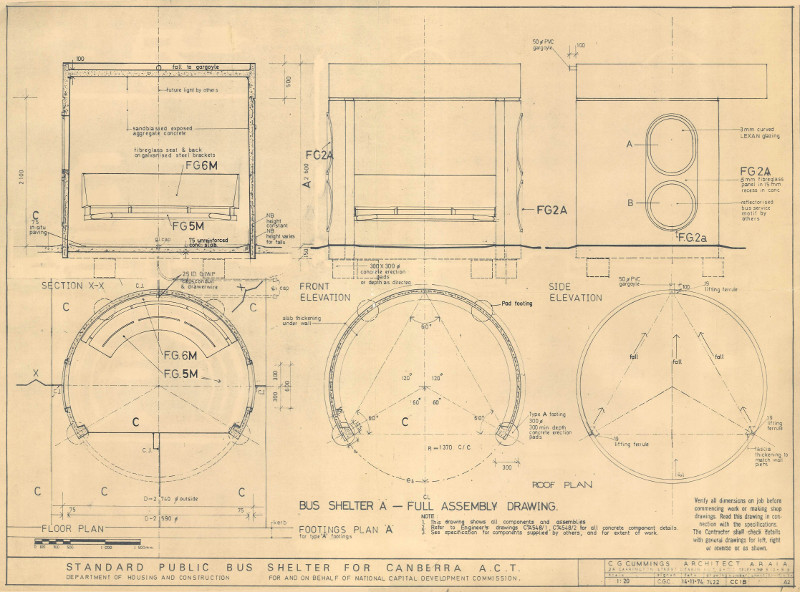 It was 41 years ago this month the ACT Transport Branch installed the first of what is arguably Canberra's most endearing piece of urban architecture - the concrete 'bunker' bus shelters.

Most Canberrans have at one time or another appreciated the shelter they provide from the summer sun and winter rains while waiting for an ACTION bus. These shelters also proved to be a more than adequate artist's canvas for the ACTION/Montone mural competitions of the 1980s and 90s.

Despite the number of files regarding the concrete shelters, it appeared there was not a complete set of plans available for the original 'Series I' design by architect Clem Cummings. At best, files hold partial plans of the modified Series II to Series V concrete shelters. Then, earlier this year, the Territory and Municipal Services Records Manager uncovered a complete set of Cummings plans stored at the Tuggeranong ACTION Depot.

Clem Cummings plans for the concrete bus shelters are ArchivesACT's Find of the Month. 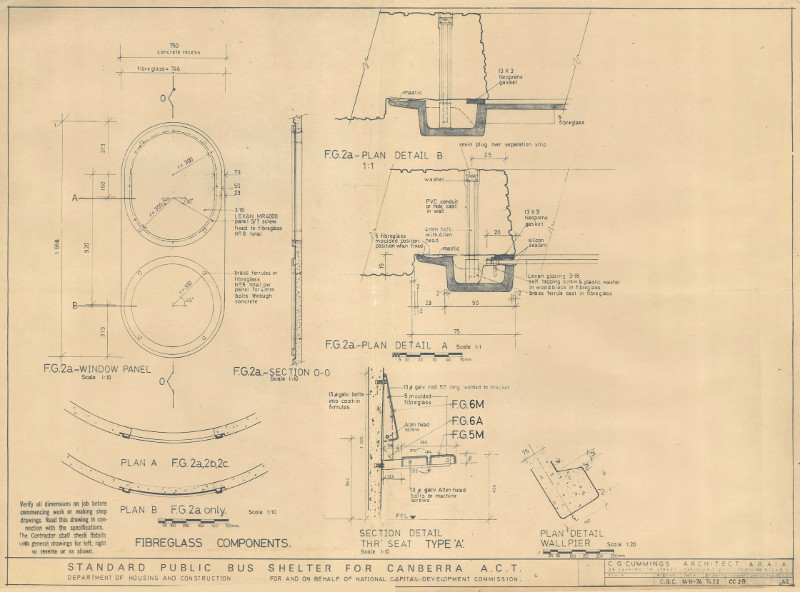 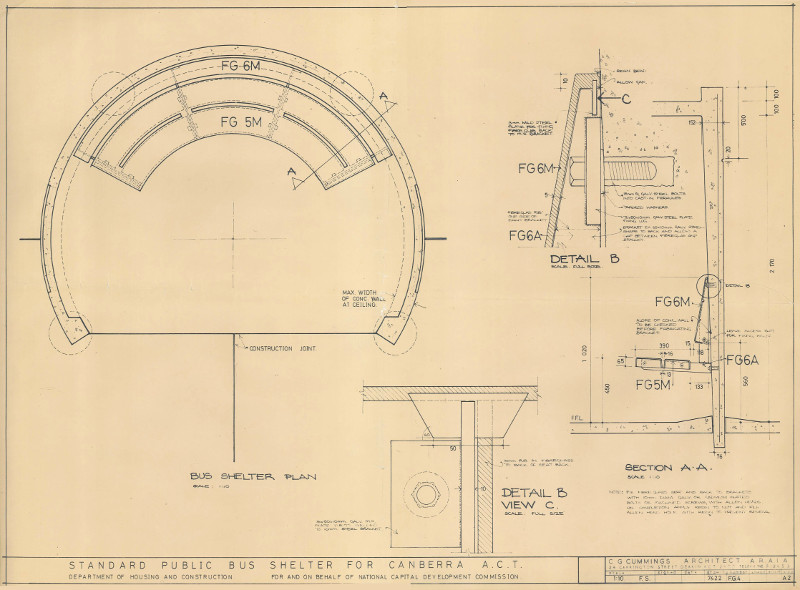 Detail plans for Clem Cummings original design. Click on each plan for a larger view. (2016/674)

Clem Cummings was born in Cairns, Queensland in 1934. He moved to Canberra in 1953 to attend the Royal Military College at Duntroon, graduating in 1955. After resigning his commission in 1957, Cummings studied architecture at Sydney University, graduating with honours in 1962. It was then he returned to Canberra to commence work at the Department of Works.

In 1968, Cummings transferred to the Prime Minister's Office where he acted as an adviser on several office refurbishment projects. He left the Commonwealth public service and joined private architectural firm, Dirk Bolt Architects and Town Planners, before establishing his own practice of C.G. Cummings, Architect in 1971. In his own practice, Cummings carried out a wide range of projects including technical advice and the preparation of restoration and conservation plans for the National Trust, the ACT Heritage Committee and the NSW Heritage Council. In 1978, Cummings received the Housing Industry Association Award for a private residence he designed for the O'Brien family in Garran. However, it is Cummings's design for the concrete bus shelters, which he prepared in 1974 for the National Capital Development Commission (NCDC) that is arguably his most recognisable work.

Since 2000, the ACT Chapter of the Royal Australian Institute of Architects (RAIA) have awarded the Clem Cummings Medal "to recognise contributions by non-architects and architects to architecture and the public interest."

The Department of the Capital Territory installed 98 of Cummings original design 'Series I' concrete shelters during 1975 as part of an overall program to improve to Canberra's public transport. The Canberra Times reported that "the new shelters will be circular, and built of concrete and fibreglass. Contracts let so far indicated that each will cost about $2,000."

By January 1976, the Departmental Co-ordinating Committee felt that the cost of $2300 per shelter was "unrealistic." The Committee suggested greatly reducing the cost of future bus shelters to $1000 each, but the Transport Branch was reluctant to change their bus shelter programme as "it took almost three years of work in co-operation with the NCDC to develop the present design."

Transport Branch Assistant Secretary, B.C. Darke argued that the concrete shelters were "functionally adequate" and "resistant to vandalism which is the predominant problem." He also predicted that a $1000 shelter would consist of a "steel frame with tin covering" which would be "fair game to the vandals of the city."

By June 1976, the cost of each shelter had increased to $2800. While, the NCDC noted Cummings's design "is functional and, generally, has been well received", they requested the Department of Construction (DOC) produce a modified shelter design. Changes to the design included removal of some or all of the seating and deletion of the Lexan (a brand of polycarbonate) windows, reducing the cost to $2000 per shelter. The NCDC also considered constructing the shelters entirely from fibreglass. 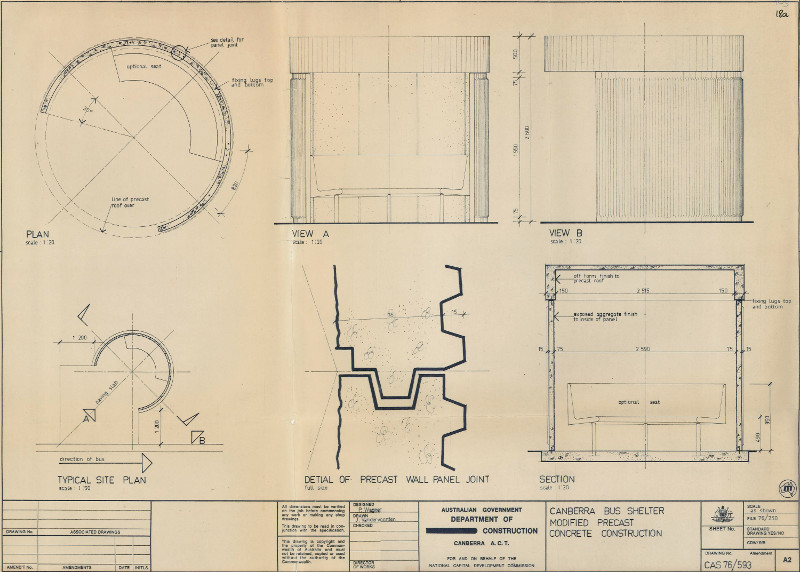 1976 plan for a modified cheaper version of the concrete bus shelter. Click on plan for larger view. (75/2030)

In December 1976, the Transport Branch rejected the windowless shelters opting to install 52 'Series II' shelters. These were modified versions of Cumming's original Series I design. The significant design changes were the inclusion of a precast floor, the elimination of the seat backrest in all shelters and removal of seats in shelters located near schools.

Series II shelters also received a protective 'Vand-l-shield' coating over the concrete surfaces. While the coating did not prevent the application of paint, it made it easier to remove graffiti from the shelters. However, the coating required reapplication after cleaning the shelters.

When first introduced to Canberra's streetscape in 1975 the unique design of the concrete shelters, reflective of the Brutalist architectural style, initially attracted some criticism from the public. One correspondent to the Canberra Times described the new shelters as "concrete monstrosities" and likened them to "orange-spotted fungi", even excusing recent vandalism to the new shelters as perhaps "those responsible for erecting the outrages are now, in remorse, secretly attempting to camouflage them with paint daubs." Canberra Times journalist Shirley Despoja merely referred to them as "lunatic."

It was Darke who begrudgingly defended the shelters design; "While some of us may object to its space age image, I think we must accept it as being functional." 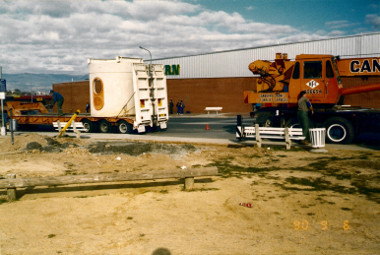 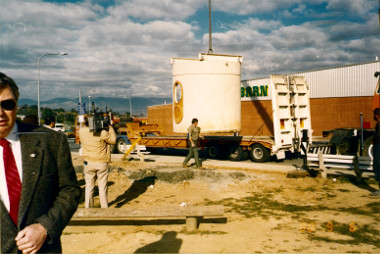 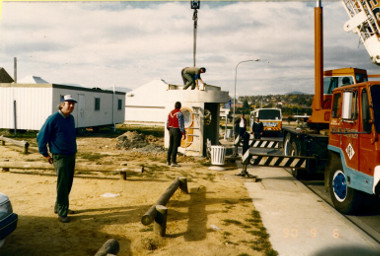 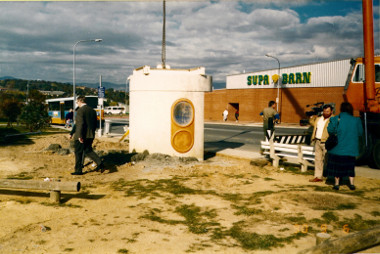 Installation of a concrete bus shelter on Comrie Street, Wanniassa opposite the Erindale Centre in 1990. (2013/6244)

While the concrete shelters were relatively vandal proof when compared to the older wooden shelters, the Lexan windows proved to be a weak point in their design. The windows were "particularly susceptible to vandalism, being burnt or pushed out." Eventually damaged windows were no longer replaced as it was considered "so expensive and futile." Soon after, the Transport Branch started receiving complaints from unhappy bus travellers of "cold and drafty conditions" in the now windowless shelters.

The Transport Branch considered installing wire glass windows but glaziers advised that these might be more dangerous if shattered. A trial of the superior Lexan 4000 windows on 10 shelters also "proved a failure as in no time, at least half the new panes were pushed out or damaged as before."

A concrete bus shelter without windowpanes due to vandalism. (ArchivesACT)

In 1979, the Transport Branch concluded they could not install the concrete shelters in sixty-six stop locations considered "difficult." The problems regarding placement were due to either space restrictions or visibility issues that would be created by the concrete shelters. The Transport Branch asked the NCDC to assess the sites and design a suitable alternate shelter "constructed of a see through material such as lexan or possibly a type of unbreakable glass." No alternate design was forthcoming.

During 1984/85, the Public Transit Branch trialled four "off-the-shelf" commercial designs that fitted their previous requirements but these all proved to be unsatisfactory. The NCDC response to the shelters in this trial was they were not approved designs and "that alternative designs are to be resisted and maximum use made of the current standard." The NCDC believed that all the siting problems could be resolved, "by moving the site of the bus stop a short distance."

By 1987, the NCDC had tempered their resistance to an alternate bus shelter design. In conjunction with a Canberra company called Metal Design, the NCDC developed a prototype shelter. During a 1987 meeting between ACTION and the NCDC, concerns were expressed that this new shelter was climbable and would be "encouraging to budding gymnasts." 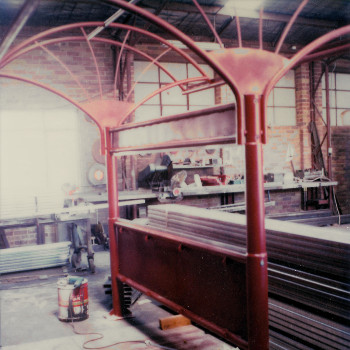 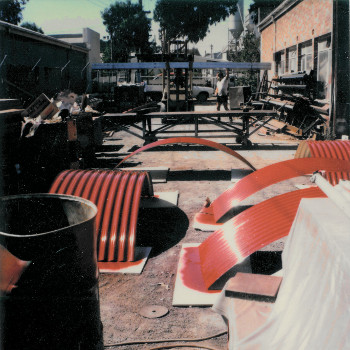 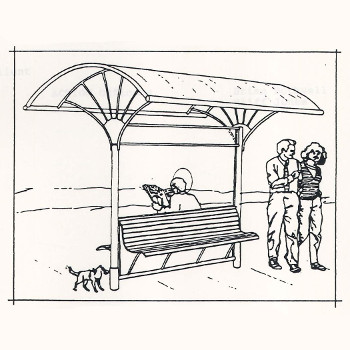 In April 1988, the NCDC installed the prototype shelter, which is still in service, on Carruthers Street in Curtin. It was to be the first of 25 similar shelters installed around Canberra. However, by October the NCDC surmised that its design was too open to the elements, and did not proceed with the project.

While the concrete shelters are synonymous with Canberra, a few examples of this striking structure can be found interstate. While both the railway stations at Bredbo and Tallong in NSW used a concrete shelter on their platform for passengers to wait in, potentially the most unique use is as a public toilet in Surfers Paradise .

Ultimately, a variety of metal and glass structures has replaced many of Canberra's concrete bus shelters. However, the large number of surviving concrete shelters is a testament to durability of Cumming's functional design. Over the years, the concrete shelters have become an admired element of Canberra's urban landscape. To quote Transport and Housing First Assistant Secretary, J.H. Marshall (1979):

"The standard concrete bus shelter has proven to be a sturdy, efficient and attractive structure that generally blends in well with the Canberra scene."