Kenneth Primrose Anderson was born on the 11th August 1896 at Kiama, NSW, the son of Thomas Primrose Anderson and Sarah Emily Fuller. He was educated at Miss Swindale's School (1903-1909), then went to Sydney Grammar (1910-1913). In January 1914, he left Australia on the Grand Tour of Europe and the UK with his mother, and also visited relatives in Scotland. While visiting Paris, when war broke out so they caught a ship at Brindisi for Ireland and left there for Australia, arriving September 1914.

Anderson enlisted in the AIF, 2nd Sect. 1st DAC (Divisional Ammunition Supply for 1st Artillery) on the 19th September 1916 and fought in France and Belgium. He was discharged on the 18th September 1919 after spending 2 years and 182 days abroad.

On his return, Anderson jackerooed in Central Queensland for a few years then became a pastoral student in the employ of F.S Falkiner & Sons Ltd in Boonoke, North Widgiewa, NSW who are still in operation today.

In 1925, Anderson entered a ballot for a Soldier Settlement block in Canberra but initially failed to gain a lease. However in January 1926, he was offered the 1503 acre (608 hectare) Stromlo Block 22 after the successful applicant, Fergus Leonard of Cootamundra, failed to respond to the Federal Capital Commission’s (FCC) notifications on this lease. This block encompassed the current suburbs of Fisher, the southern half of Waramanga, parts of Stirling and Chifley and most of Mount Taylor. Plan of Stromlo Block 22. Click on plan for larger view. In July 1926, Anderson applied for permission to erect a three room cottage and a fence enclosure. The FCC reported in October 1926 that a "house 22 x 10 [6.7 x 3 m] has been erected on block. Lessee is living on block." By June 1927 Anderson was calling his property Allawah. 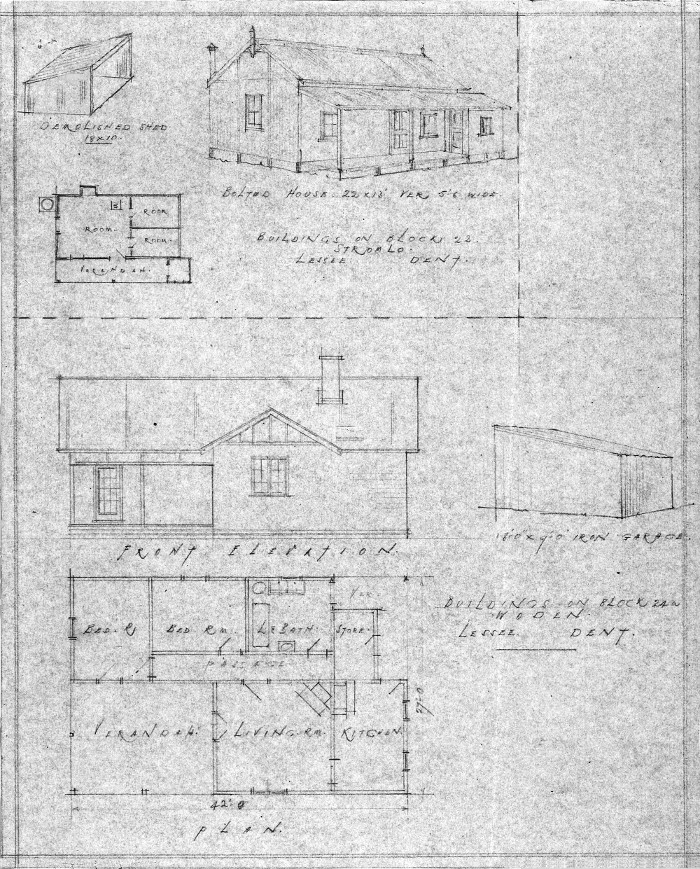 Drawings and plans of buildings on Stromlo Block 22. Click on image for larger view.

Long Gully Lane ran along the northern boundary of Stromlo Block 22. Until the development of Woden Valley in the early 1960s this dirt road was a link between the Tharwa Road and Cotter Road and also provided access to the popular Kambah Pool. In 1928, Long Gully Lane was unfenced and it was only the gates between properties that prevented livestock escaping to neighbouring properties and beyond. At that time Anderson reported to the FCC:

"During the summer months especially, a considerable amount of traffic passes through, to and from the reserve on the river. It is not unusual to find one or two gates left open on this road and on one occasion every gate from the Cotter Road to the lane leading to the river was open."

This was allowing Anderson’s lambing ewes to escape and "Being chased up and down the lane by motor cars and lorries." Anderson requested that the FCC provide boundary fencing along the lane that was completed early 1929.

By mid 1929, struggling to make rental payments, Anderson proposed Stromlo Block 22 be subdivided and his three neighbours could take over his lease. None of his neighbours agreed with this proposal. In April the following year Anderson wrote to the Department of Home Affairs requesting a further extension to his rental arrears explaining, "As returns from wool and lambs produced during the past twelve months will not nearly cover the rental. I find that I am still not in a position to pay the amount due." At the time he owed £432/2/3 excluding penalties for late payments.

In this period Anderson helped form the Rural Lessees Association in an attempt to improve conditions for local farmers. Anderson writing on his own financial troubles illustrated what many Territory farmers were experiencing during the Depression:

"As my Block does not return me a gross revenue equal to the amount of my rent, and indeed was, last year, upwards on £100 less than the rent, and as this year's wool clip promises to sell at an even lower figure, and as moreover, it is not possible to induce anyone to regard a Territory lease – with its high rental and onerous conditions, its small area and short term, as a "security" I have not (despite my endeavours) been able to raise a loan by which to comply with your requests." 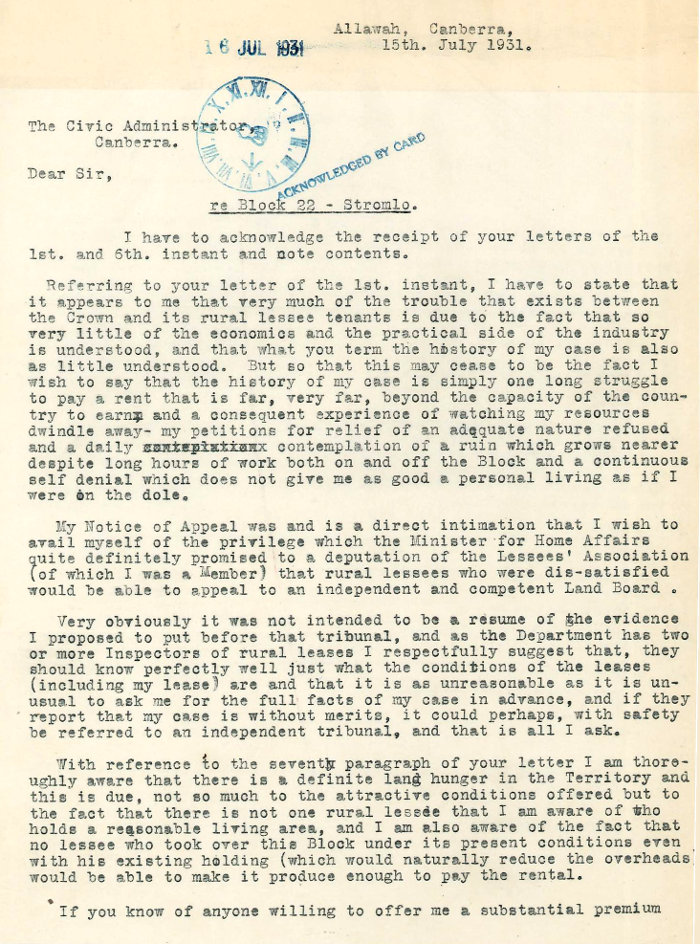 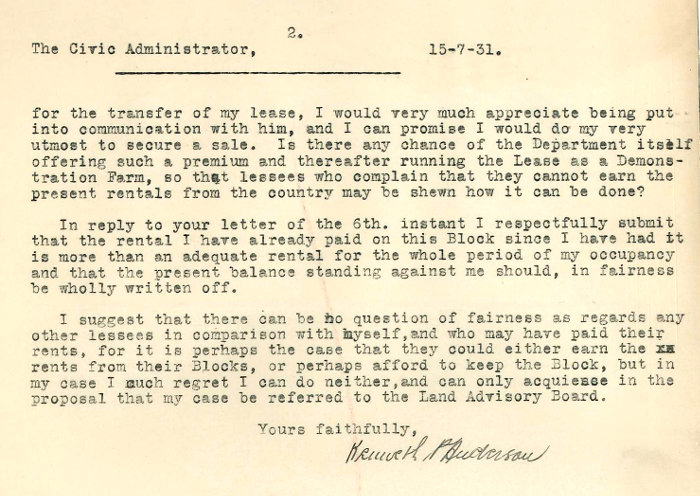 Anderson continued on Stromlo Block 22 until November 1932, still unable to pay his rent. The block was then transferred to Stella Clarke Dent of Red Hill, allowing Anderson to repay the £1066/11/1 he owed the Department of Home Affairs. Stella, the wife of local grazier John Irwin Dent also took over the lease of John Maguire's 1319 acre (534 hectare) Woden Block 24A called Weston. Both blocks were transferred to Stella's son, John Dent, the following year.

In 1933, Anderson leased property at Brindabella until 1936 when he took over the lease of Pine Ridge, Belconnen Block 18A at Weetangera. He ran this block as a grazier until 1975. Kenneth Anderson was living in Latham when he died on the 16th March 1988 at Canberra Hospital.