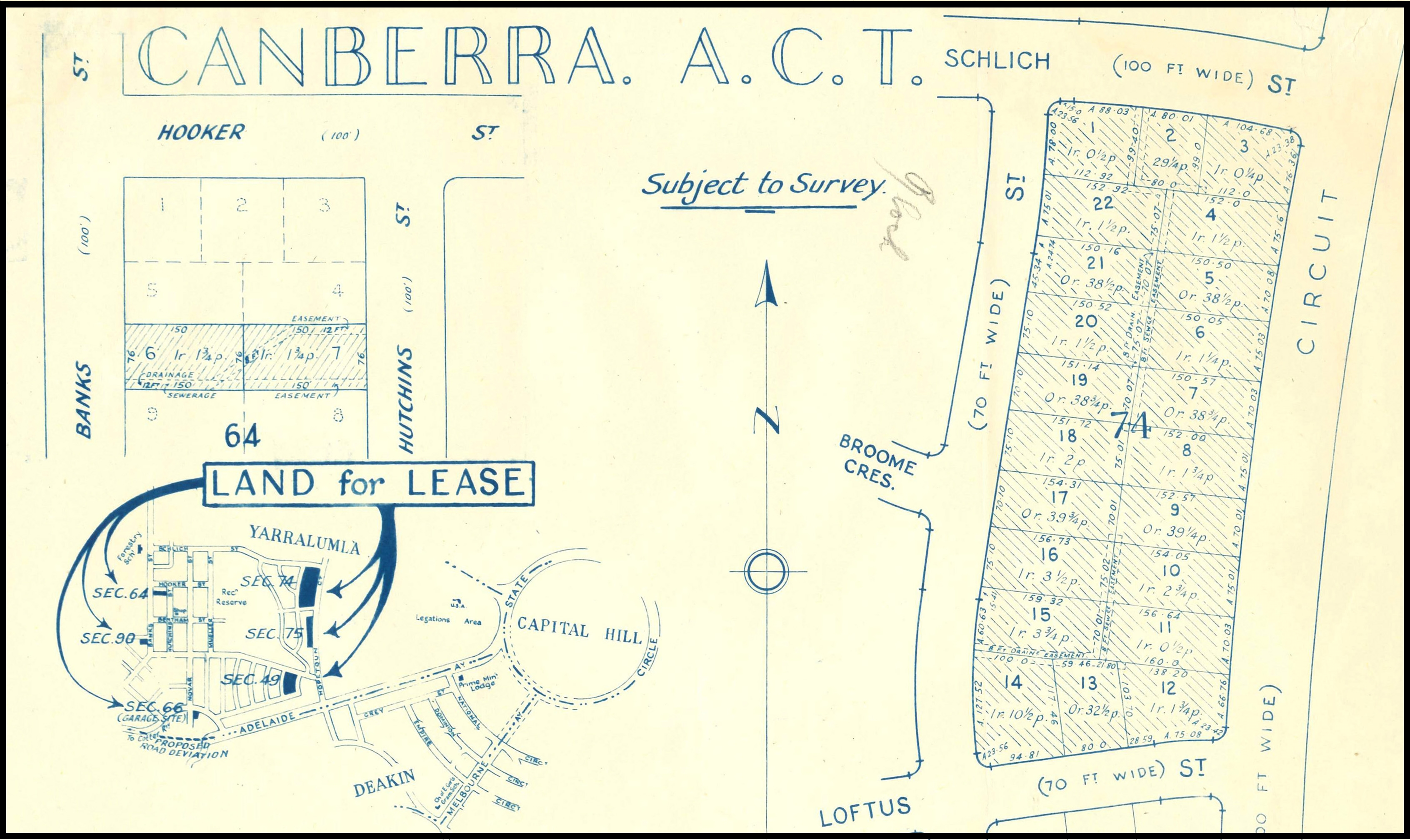 On the 18 October 1924 the Commonwealth government advertised the leasing of land in the city area of the ‘Territory for the seat of Government’. All the details of blocks of land situated in Eastlake, Ainslie, Red Hill, Blandfordia, Civic Centre and Manuka that were available for ninety-nine year leasehold were listed in the government gazetteI.  While there were no particular building requirements for the blocks listed for residential use, the blocks in the Civic Centre were offered on the condition that the erection of buildings comply with a special building plan; a plan that developed into what we now know as the Sydney Buildings ii. Records being highlighted for our March Find of the Month include copies of sale plans for auctions held from the late 1940s and through the 1950s, as well as an index to earlier gazette advertisements for land sales.

The index entries for blocks advertised for lease date from October 1924 to November 1951. They are arranged in date order and then by the land division, giving reference to the gazette page number, plan number and the type of land use each block is to be used for. Most were required to be used as residential, business or industrial properties but other entries had quite specific purposes, such as boarding houses, a YWCA building or a theatre. 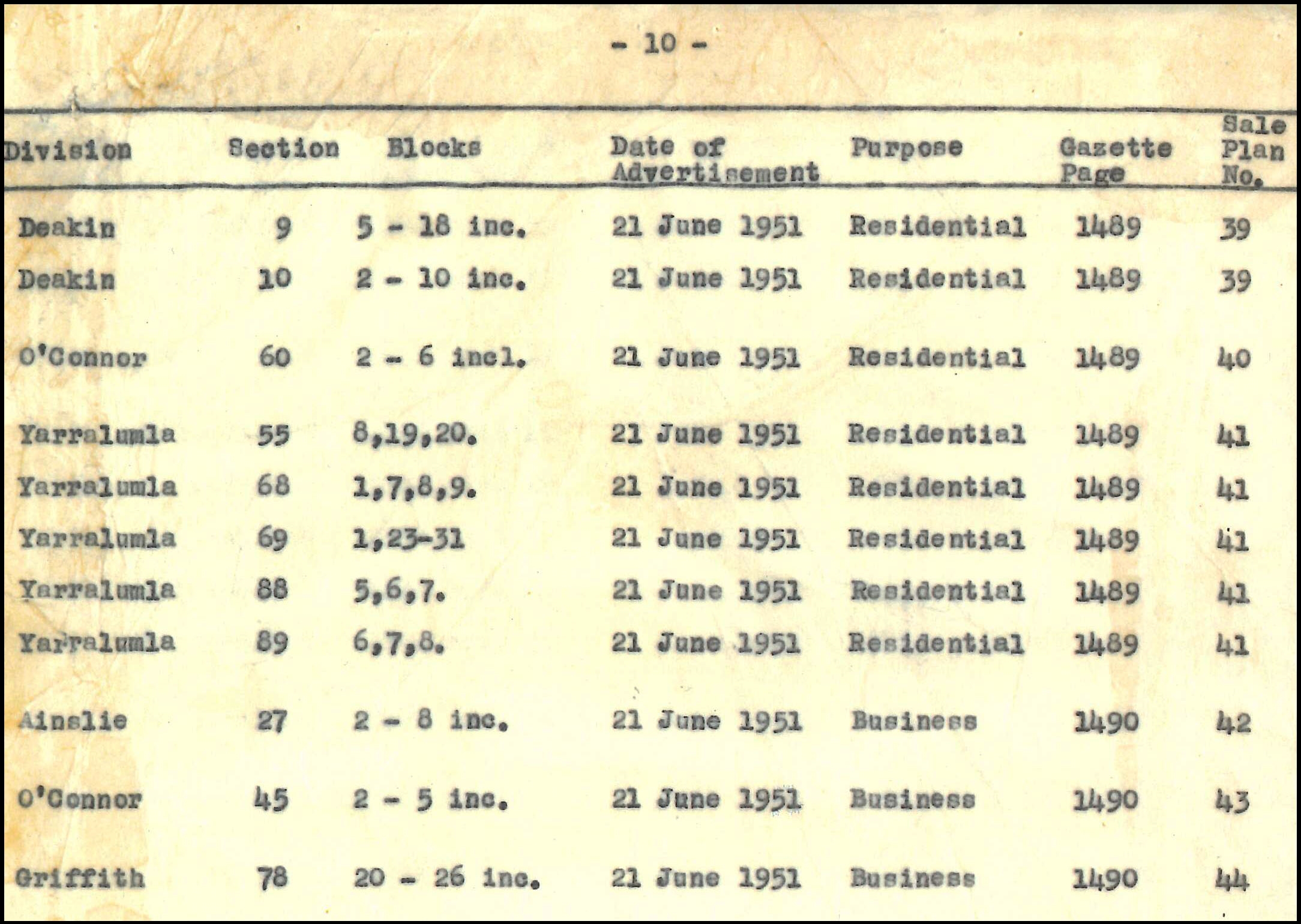 The sale plans held by ArchivesACT start in 1949 at around the time that the gazette index stops. They detail in a graphic form the blocks offered at auction sales and are accompanied by information such as conditions of sale, reserve price and the type of lease being offered. Some plans were annotated following the auction to indicate who purchased each block or whether it had been passed in. One of the more unusual sale plans lists five parcels of land in the Division of Fyshwick that were offered up as vegetable blocks. The special conditions for these leases included the requirement that a vegetable garden was to be established to the satisfaction of the Commonwealth within three months of purchase and that the lessee was:

Not to sell or dispose of any product of the vegetable garden without the consent in writing of the Commonwealth, to any person who does not reside within the Australian Capital Territory or to any corporation which does not carry on any business in the ACT .iv As is the case with the index to earlier advertisements, the majority of the sale plans relate to residential leases, but blocks were also offered for more specific purposes such as sites for garages, hotels, theatres and livestock saleyards. Site plans for blocks put aside for the Black Mountain Tourist Park and the removal of fireclay from land in Jervis Bay are also included.

At least some of the auctions were popular and generated some ‘spirited bidding’. More than 600 ‘persons’ turned up at Albert Hall in March 1953 to observe the bidding for leases in the proposed new shopping centres of the Brisbane Buildings and Newcastle Buildings in the city. According to a Canberra Times article published on the following Monday, it was the first time for 25 years that leases had been offered at Civic Centre. There was a large crowd but apparently just 30 bidders, with just one block being passed in.  The article listed in detail the blocks sold and the purchasers vi. 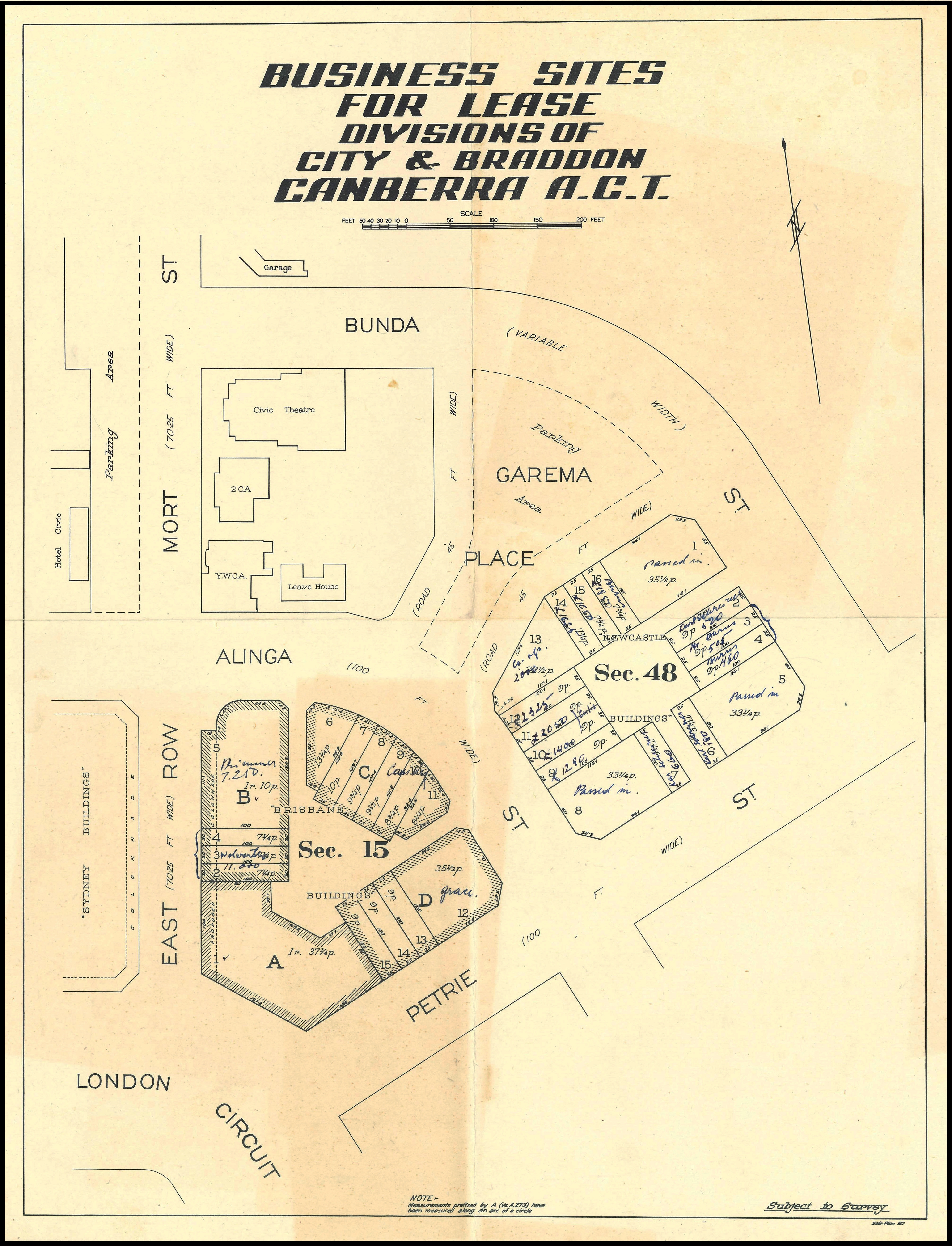 The Department of the Interior decided to print a pamphlet to set out the conditions for leasing blocks offered in this auction. Each parcel was offered as a business lease for a term of 99 years on the condition that;

The ground floor of any approved building erected on the leased land shall be used for the purposes only of a shop or shops or similar trading premises approved by the Minister but the upper floor of such building may be used wholly or in part as a shop, offices, consulting rooms, work rooms, sample rooms or warehouse with or without connection with the business conducted on the ground floor, or wholly or in part for a caretaker’s residence.

Many of the conditions were concerned with the architectural design of the buildings to be erected on each block to ensure that they would complement existing buildings in the city. They would be;

two storey buildings covering not less than 60% of every block and having a continuous street façade, harmonious with but not necessarily identical to Sydney Buildings, but of similar colour. viii 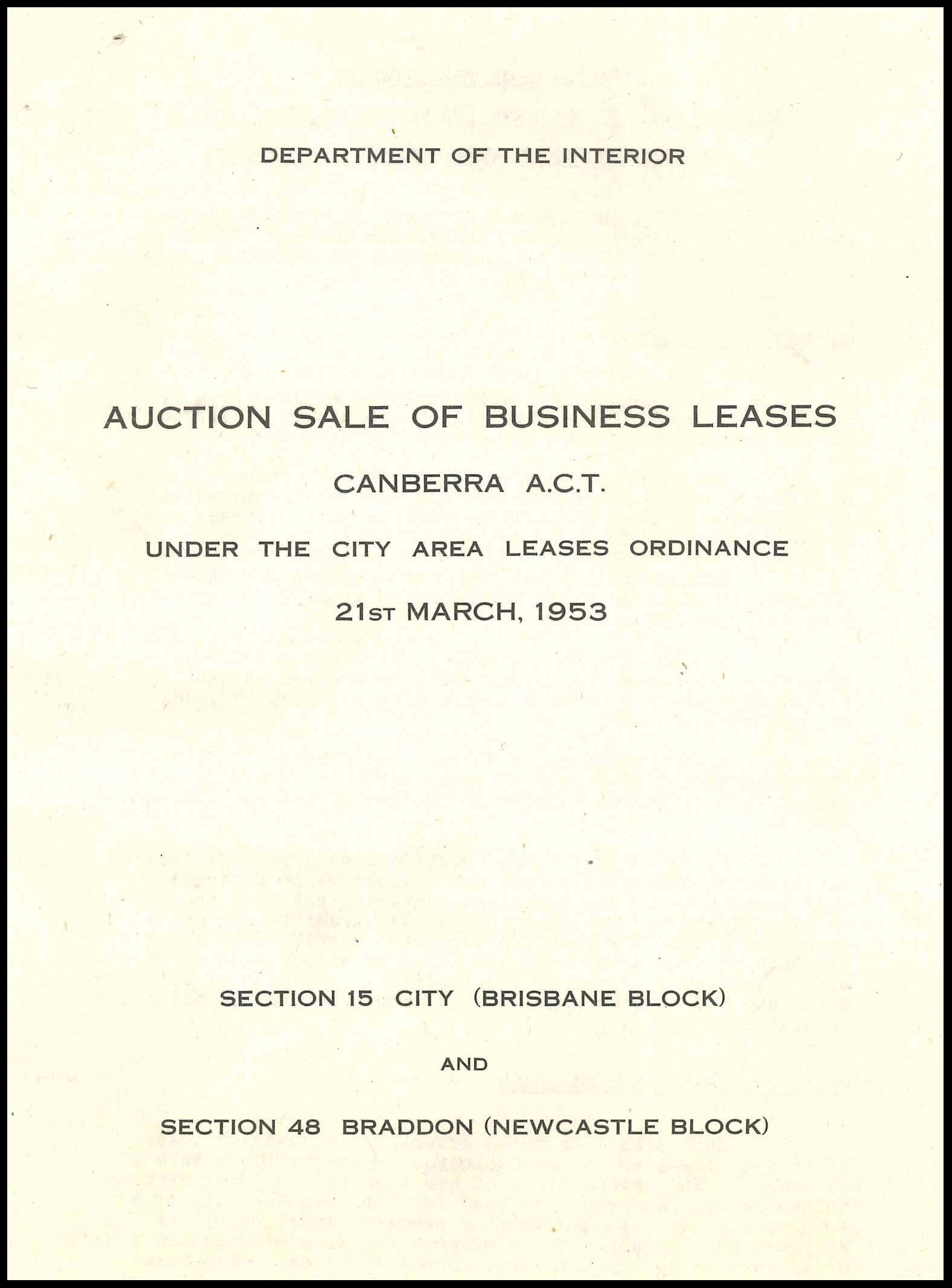 The sale plan records provide an opportunity to delve into another chapter in the life of our territory. They are important for showing us another aspect of the planning, growth and development of Canberra and the territory, and how that development can be tracked through archived records. The Territory Records Act 2002 enables the ArchivesACT to fulfil our ongoing commitment to making information available to the community, giving us all the opportunity to share in the history, and culture of the ACT.