Planning for forests in the Federal Capital Territory. From its early beginnings Canberra has been dubbed ‘the bush capital’. At first the term was used because the Federal Capital site was required to be located not less than one hundred miles from Sydney, or in ‘the bush’. This even triggered the creation of an anti-bush capital movement by city folk. The derision attached to the label lasted for some years but has waned over time and now when Canberrans say that they live in the ‘bush capital’, they do so with fondness or pride. The term has evolved to mean something quite different and now relates more to a liveable city with open spaces and plenty of trees, thanks to the foresight embedded in the original layout and design of the city and the Territory Plan.

Familiar names such as Charles Weston and Walter Burley Griffin made significant contributions to the early planning for the afforestation of the Federal Capital, as well as a lesser known contributor, Professor H. Hugh Corbin. ArchivesACT’s October Find of the Month focuses on a single file that includes some of the documents used to plan for Canberra’s forests of the future.

In 1917 two reports relating to afforestation in the Federal Capital Territory (FCT) were received by the Department of Home Affairs. J. T. Johnstone, Chief Superintendant of State Nurseries and Forest Plantations, Melbourne and Donald Campbell, Superintendant of Tree Planting, Melbourne City Council, travelled to the FCT in October 1917. They visited for nine days to inspect and report on ‘the land outside the proposed Federal Capital site as to the commercial aspect of planting trees, or otherwise forming forests for economic purposes’i. Despite their best efforts, when the reports reached the Minister for Home & Territories’ office it was thought more detailed consideration was needed that included suggestions for a repatriation scheme that covered the systematic development of forestryii.

Enter Professor (Horace) Hugh Corbin, who was at the time a Consulting Forester and the main lecturer on forestry at the University of Adelaide before the Australian Forestry School was establishediii. He was well known in forestry circles and in January 1918 at the request of the Minister for Home & Territories, Patrick McMahon Glynn, provided some suggestions on forestry work to be done in the Federal Capital and how it might be used as a repatriation schemeiv.  Glynn invited Corbin to visit Canberra to research a more comprehensive report on the afforestation of the FCT. The offer was accepted, with Corbin only asking compensation for any expenses in return. Walter Burley Griffin, then working in his role as Federal Capital Director of Design & Construction, was informed of the visit and asked to provide Corbin with various reports and statistics relevant to his research and the areas he would cover in field trips. A bundle of reports passed on by Griffin, along with seven large format maps are now included in a file held by ArchivesACT. 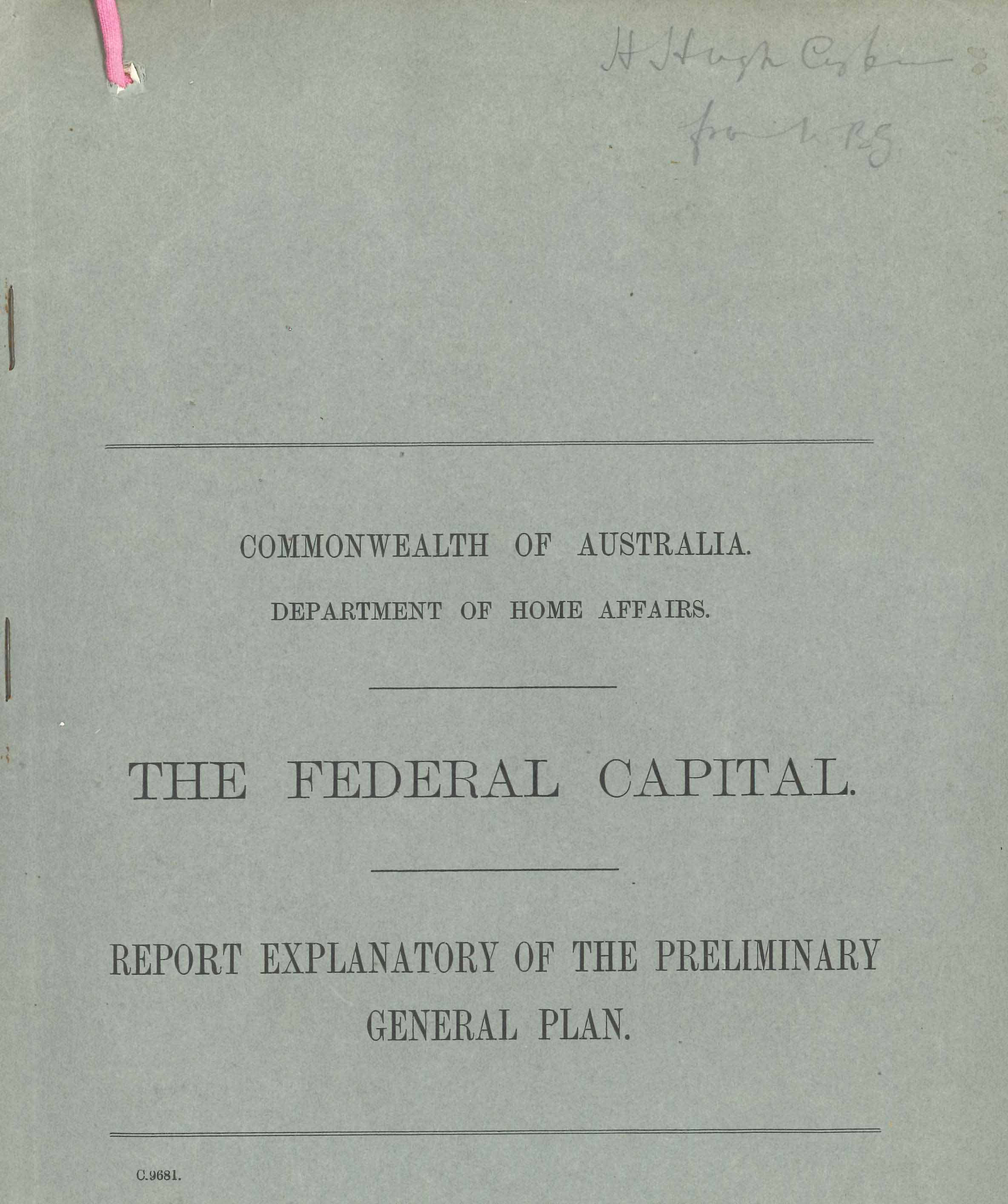 Corbin covered a large area of the FCT during his visit. He spent three days on horseback on one expedition to the Tidbinbilla and Orroral localities, accompanied by a government surveyor and a guidevi. The excursions also took in Coree on the western FCT boundary and visits to the towns of Queanbeyan and Hall. The courses taken on his travels are recorded on two maps that also show the lands acquired by the Commonwealth and crown reserves. 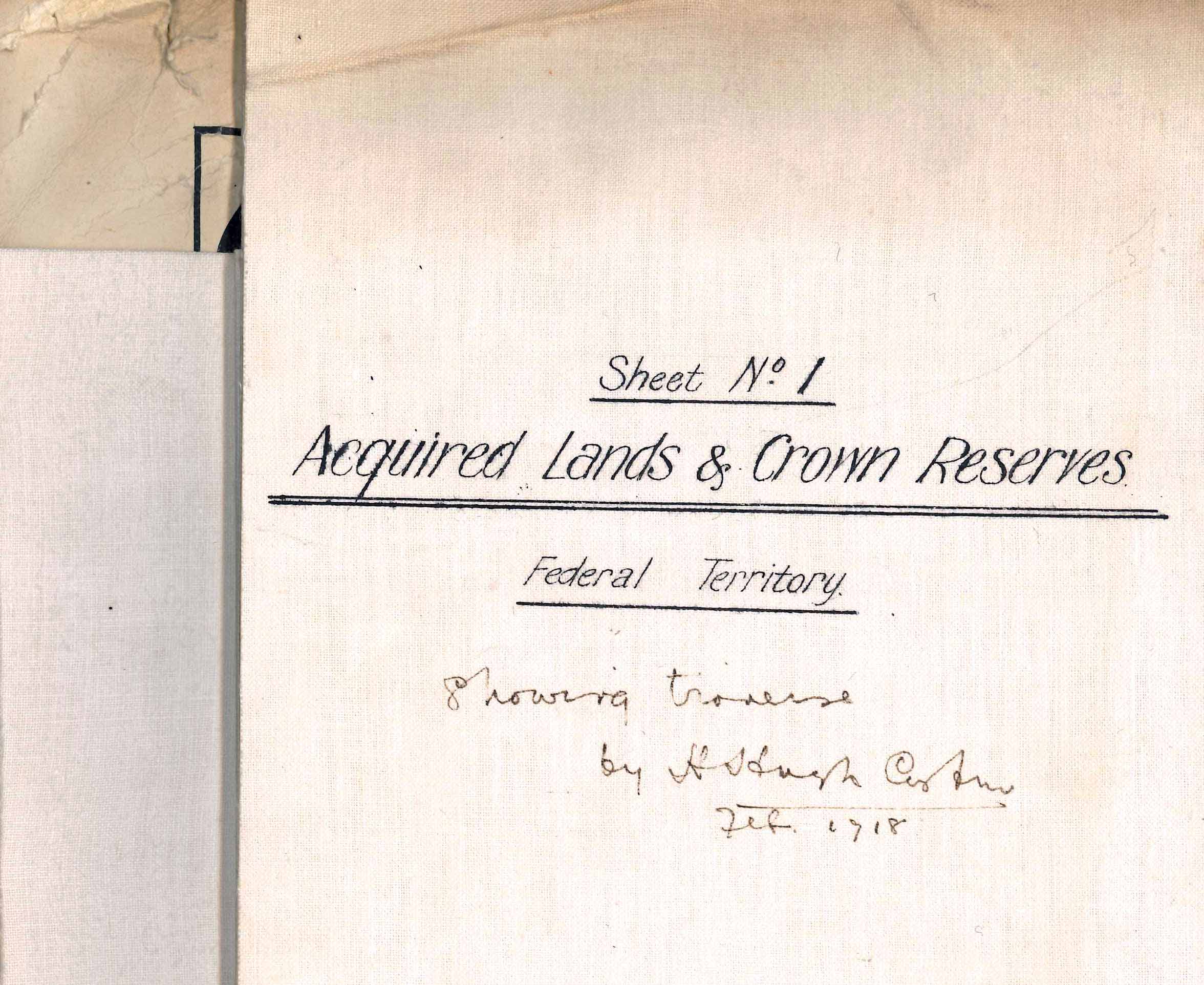 Facing fold and detail of map 'showing traverse by H Hugh Corbin Feb 1918'. The courses taken by Corbin are shown by a red line. vii

The subject of repatriation and settlement schemes for returned soldiers was a hot topic at this time. On the 12 June 1918, in the House of Representatives the Member for Eden-Monaro, Mr Austin Chapman, asked a question of Mr Glynn, Minister for Home and Territories:

Is it a fact that thousands of acres in the Federal Territory are at present unoccupied except by rabbits, and that much of this land has been enclosed and wire netted, and if placed under occupation would be suitable for afforestation and cultivation, and would make suitable homes for many returned soldiers?

The Minister gave the following answer:

There are practically no lands suitable for grazing or agriculture in the Federal Capital Territory, which are not held under lease for varying terms.viii

Curiously, the Minister didn’t mention afforestation in his response, only referring to grazing and agriculture. Possibly it was due to Corbin’s report written just prior to this that suggested that an afforestation scheme could only support a limited number of jobs that might be made available to returned soldiers. While researching in Canberra he had access to a separate map that showed all netting fences in the territory and land areas infested by rabbits. He agreed with the view that the rabbit pest had affected the way the land could be used in the FCT. He concluded that ‘in forest plantations it is necessary for two or three years to protect the young trees from the rabbit; but expensive permanent fencing is unnecessary’ix.  On the subject of a scheme for the returned soldiers that contributed to the afforestation of the FCT he recommended that they could be employed in the ‘clearing’ of rabbits  and planting trees for forestsx.

For Professor Corbin though, it was all about good planning. He was clear in his warning that ‘to rush a large number of men up to the Federal Capital Territory, and to expect that productive work can be suddenly found for them, unless time is given to form plans and to organise, will result in waste of money, and probably dissatisfaction among all concerned’. Rabbits and repatriation are just two of the topics analysed in Corbin’s report, others include meteorology, catchment areas and river bends to name a few. Establishing working plans for each individual forest was one of his key recommendations.

The records he used to research his report provide an interesting insight into another aspect of early ACT planning.