A Place to Call Home

The Raiders' move to Canberra. 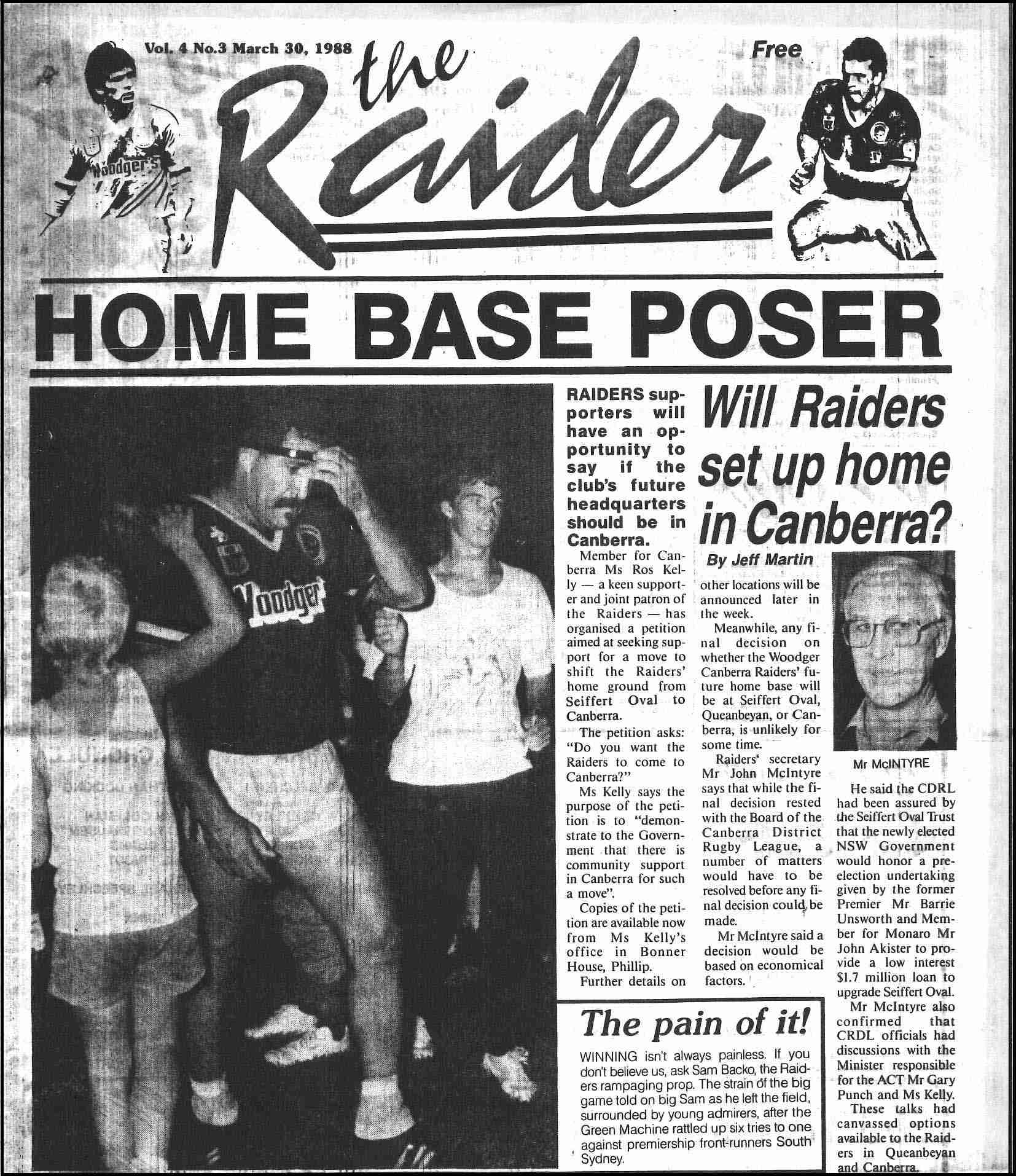 The 2019 National Rugby League (NRL) football competition has been decided, the Canberra Raiders (Raiders) making it back into the finals but not quite winning the premiership. Now that the dust has settled and football fans look forward to next season, we thought it might be a good idea to reflect on some of the Club’s history. In 1982 the NRL admitted the Raiders into the New South Wales Rugby Football premiership to expand the competition beyond Sydney.ii But it was the Queanbeyan Blues rugby league team that was chosen to form the Canberra franchise, and between 1982 and 1990 the Raiders were based, and played their home games on Seiffert Oval, in Queanbeyan. We have selected two files relating to the Raiders’ move to Australian Institute of Sport’s Bruce Stadium (Canberra Stadium) as our December Find of the Month.

Unsurprisingly, when talk of a move to a Canberra venue by the Raiders became public there was some resistance from those wanting to see the Raiders stay in Queanbeyan. Queanbeyan City Council sought help from the New South Wales government to pitch in with funding to upgrade Seiffert Oval in an attempt to have the Raiders stay in town. The Queanbeyan Age was confident enough to report on 20 July 1988 that they would stay at Seiffert Ovaliii, but it seems inevitable that the Raiders would make the move across the border to a larger venue in Canberra. John McIntyre, the Club’s Secretary at the time argued that;

It would seem that a significant proportion of our supporting public are reluctant to make the trip to Queanbeyan. The Club charters ACTION buses for all home games and patronage on this service has declined over the last three years. We are of the opinion that, notwithstanding the NSW Government’s offer of financial assistance towards up-grading Seiffert Oval, the team’s financial viability would be more secure in Canberra.iv

On 26 August 1988, Federal Ministers Gary Punch, Senator Graeme Richardson and Ros Kelly issued a joint media release announcing that the Canberra Raiders Rugby League Club would make the Bruce Stadium in the ACT their new home ground. There had been some discussion on developing the Northbourne Oval in Braddon as a new home for the Raiders, but this was not the preferred option due to planning difficulties, the expense involved in upgrading the venue, and opposition from local resident groups. So Bruce Stadium it was to be, but there was one significant ‘hurdle’.

Bruce Stadium had been purpose built by the National Capital Development Commission (NCDC) as an athletics stadium to host the 3rd Pacific Conference Games in 1977. In June 1973, the Pacific Conference Games Committee announced Australia as provisional hosts for the 3rd Games, this being dependant on appropriate government funding. In the early 1970s Canberra didn't have any suitable all-weather athletics facilities to host an event of that size, but the NCDC had been planning a complex of this nature for the Belconnen area, and the development was brought forward to be ready for the 1977 Pacific Conference Games. The new National Athletics Stadium was built to accommodate 16,000 spectators and included facilities built to international standards for track and field events. The ACT Administration anticipated that many thousands of people would visit the stadium for the two-day meeting to enjoy the spectacle and excitement of world champion athletes in competition.v 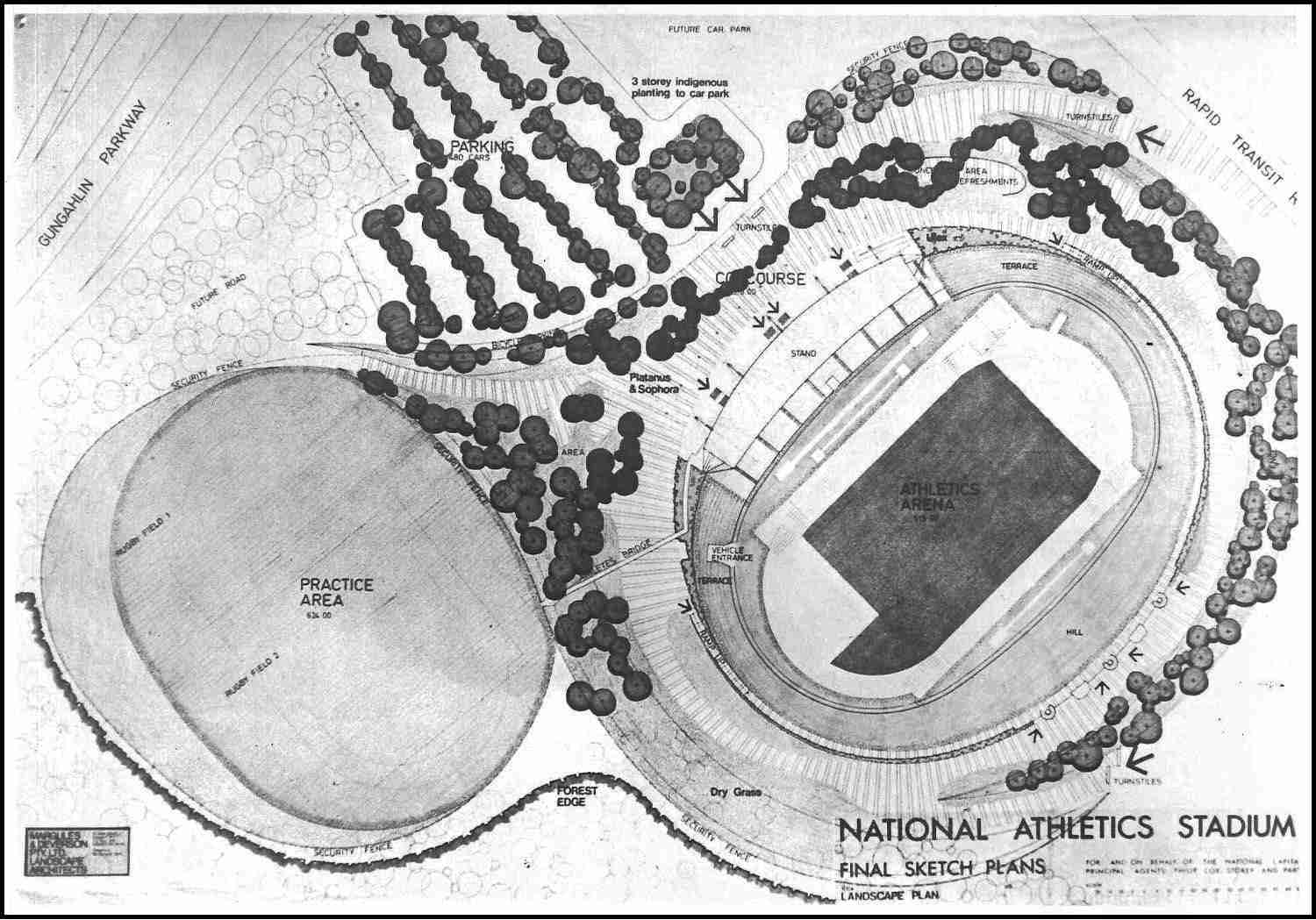 The new stadium was purpose built for athletics and, while it was well used by athletes and spectators during the Pacific Conference Games, by 1988 it was underutilised and its income earning capacity was hampered by the specialised nature of the facility.vi This made it difficult to be used for any sports other than athletics and soccer. The Australian Institute of Sport was looking for opportunities to enhance the versatility of the stadium, but the nature of an athletics facility that included an 8-lane running track made it difficult to host other team sports.vii At the same time, the ACT athletics community were very keen to retain their national standard athletics facility.

Negotiations between the Raiders, the Australian Institute of Sport and the ACT Administration made it possible to accommodate the Canberra Raiders at Bruce Stadium starting from the beginning of the 1990 NRL season. The main arena was redeveloped by the removal of the athletics track, installation of VIP lounges and an upgrade to the main grandstand. The neighbouring athletics ‘warm-up’ oval was also upgraded to meet the requirements of the Australian Institute of Sport and the wider ACT athletics community.

The Canberra Raiders had found their new home.