Let's talk of graves, of worms, and epitaphs 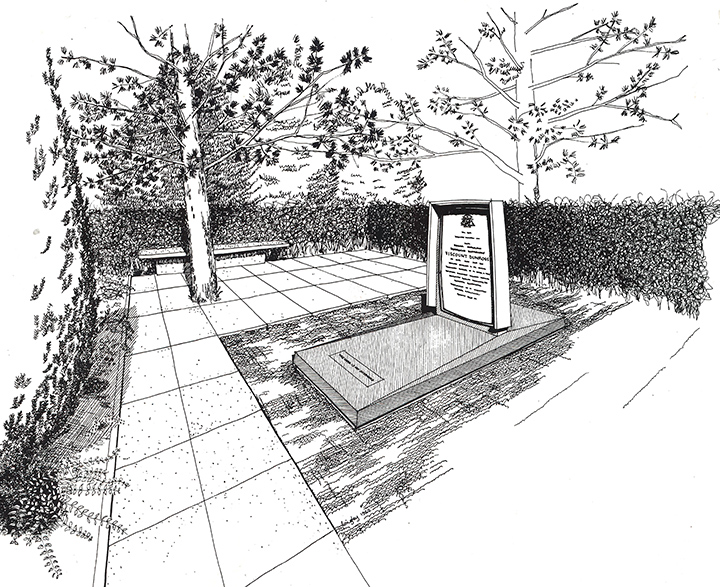 "Thou know'st 'tis common; all that lives must die,
Passing through nature to eternity."
Hamlet Act I, Scene 2

ArchivesACT’s August Find of the Month is the long story of the monument to the man who holds the record for having the shortest vice regal term in Australian history.

Since 1845 the churchyard at St John’s Anglican Church in Reid has been the resting place of Canberra’s most prominent citizens and family dynasties; but one of its most significant residents lived here for just one year.

The churchyard at St Johns has officially been closed to burials since 1936. However, between 1920 and 1937, £2 could buy you an Exclusive Right of Burial Certificate, ensuring your final resting place would be the one you chose.(i) This most often meant that those who had relatives already buried there could stay with them in the great beyond. Cash was not the only way into this exclusive enclave; The Cemeteries Ordinance of 1933 left specific provision for “such exceptions and qualifications as the Minister thinks fit”.(ii) Which was fortunate, because in 1961 an extremely qualified candidate needed a place in the crowded churchyard.

William Shepherd Morrison, widely known as “Shakes” for his habit of quoting Shakespeare, was born in Argyllshire, Scotland in 1893. A scholar of Edinburgh University and a decorated veteran of the First World War, he became a barrister before entering the British Parliament as the Conservative member for Cirencester and Tewkesbury. He married fellow Edinburgh alumni, Catherine Allison Swan in 1924.(iii) They would go on to have four sons. After a distinguished political career, including as Speaker of the House of Commons from 1951 to 1959, he retired for reasons of ill health.(iv)

“and 'tis our fast intent
To shake all cares and business from our age,
Conferring them on younger strengths, while we
Unburdened crawl toward death.”
King Lear, Act 1, Scene 1

It would seem that quiet retirement did not suit him, because the following year he became the 14th Governor-General of Australia. 2. On the steps of Parliament House following the swearing in ceremony.

As the first Viscount Dunrossil, (as former Speaker he was awarded a hereditary peerage) he was sworn in on February 3, 1960. The Viscount chose to wear the sensational ceremonial viceregal uniform of the role, the likes of which had not been seen for thirty years. The feathered hat was a particularly impressive touch but on a February day in Canberra it must have been extremely uncomfortable to wear.

But he was a man who could wear a distinguished hat.

Despite a propensity for ostentatious outfits and fierce expressions, Viscount Dunrossil was, by many accounts, a pleasant and good-humoured man, whose ill-health unfortunately meant that after a cracking start, he was unable to engage fully with his role. Lady Dunrossil often stood in for him.

"Tis a vile thing to die, my gracious lord,
When men are unprepared and look not for it."
Richard III Act III, scene 2 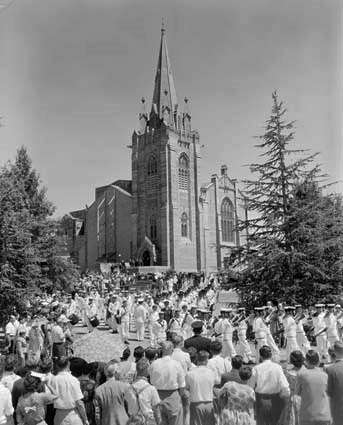 3. Military parade for the State funeral of Viscount Dunrossil.

Viscount Dunrossil’s untimely demise at only 67, one year and a day after he was sworn in, caused not only significant personal grief to his widow, family and staff, but consternation amongst public officials. A Governor-General had never previously (or in fact since) died whilst in office. Arrangements were quickly made with direct input from the Prime Minister and one of Canberra’s most famous public servants, Sir Geoffrey Yeend. 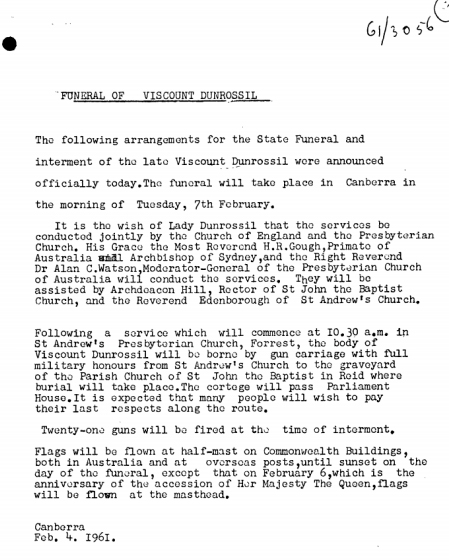 It was reported in the Canberra Times that the funeral for Viscount Dunrossil was “…one of the saddest in Canberra's short history, but mixed with the sadness was a pride—a pride that a man of such qualities as Viscount Dunrossil had so loved Canberra that his widow had known she would be following his wishes in allowing him to be buried here, so becoming forever part of a growing city in a growing country.”

But this was only the beginning of a saga of costs and maintenance that would span the next twenty years and beyond. The pomp and ceremony of a State funeral was all very well, but when it came to the final resting place, those in charge of the public purse had to be mindful of appearances. The Viscount may have liked a fancy outfit in life, but in death, he should not outshine his neighbours.

Prime Minister Robert Menzies, who had been a personal friend of the late Governor-General, requested well-known Canberra designer Mr Derek Wrigley, then the ANU’s University Architect, to design the gravestone. It was built in white marble, granite and bronze by Henry Satrapa, a monumental stonemason from Queanbeyan. They also designed a contemplative seat to be placed nearby. A file note reveals that the famous designer’s original ideas proved too far from the bottom line for the Department, whose brief favoured sitting in the cheap seats. 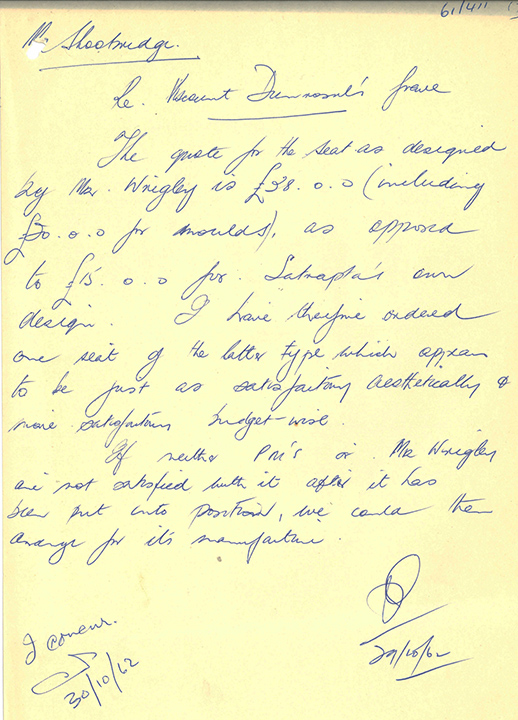 As it is often stated that time is money, perhaps it was no bad thing that everyone needed to get a move on when it was suggested that the Queen might want to visit the gravesite during her time in Canberra in 1963. 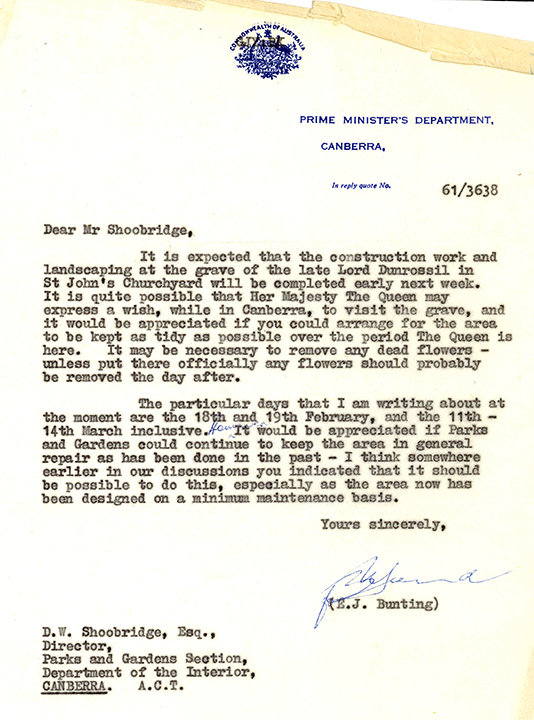 Whilst the responsibility for the upkeep of the Church and its yard lay with the Parish Council, its importance as an historical site meant that a Commonwealth grant was awarded towards maintenance. In 1934 the amount of the grant was £100 per annum, by 1980, it was $2,000.  This arrangement would prove to be a matter for ongoing debate between the Government and the leaders of the Church.

While the Viscount’s surrounds were designed to be low maintenance, it was noted that some of the other residents had let themselves go.

Extract of a letter from R. Kingsland, Secretary of the Department of the Interior to the Venerable Archdeacon F. M. Hill in 1965.

These discussions were still taking place over twenty years later, when the ashes of Lady Dunrossil were brought from the UK to take their place on the gravestone. 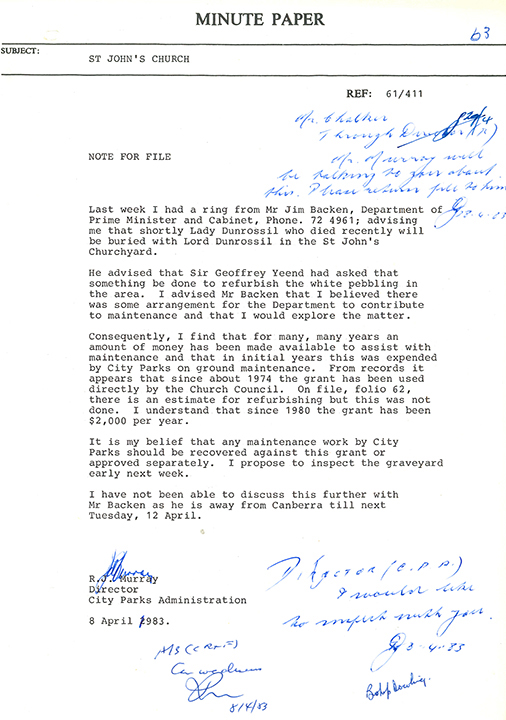 The original drawings clearly show the space intended for the additional interment, however, to the designers’ chagrin, rather than a flat surface, the vessel was placed vertically in front, and sits like a small footstool in front of the impressive headstone.

“The worst is death, and death will have his day”.
Richard II Act III, scene 2