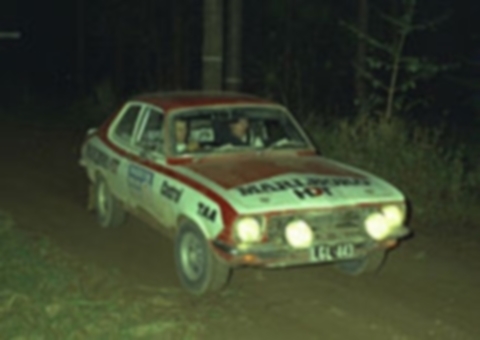 In 1973 local car rally enthusiasts embarked on an ambitious plan to put rally car driving in Australia on the international stage by running the first “true European style car rally” in the ACT.  ACT Forests had long been used as a car rally venue, with forestry rangers providing permission and monitoring environmental aspects. However the Don Capasco was to take Australian rallying to a whole new level. Designed for spectators and broadcast live, the course kicked off at Civic before moving on to Stromlo and incorporated an impressive fifty special stages over two days and one night, including the infamous ‘Mineshaft’.

The idea was the brainchild of the Southern Districts Motor Sports Association, and the Race Director was an Australian car rally legend, and Canberra local Peter Lang.  The sponsor was the company behind the brand names Don and Capasco. These brands were well established overseas for engineering “industrial friction materials” (that’s brakes for the non-car enthusiasts!). Keen to pick up the Australian market, they included a donation of $2000 to be allocated as prizemoney.

Organising this race would take a year and involved collaboration with local government, private companies, motoring organisations and professionals. ArchivesACT has recently uncovered the forestry files related to the preparation and running of this landmark event in ACT Forests. The inaugural ‘Don Capasco’ changed the landscape for car rally racing in Australia and for this reason its records have been chosen as ArchivesACT’s November Find of the Month. 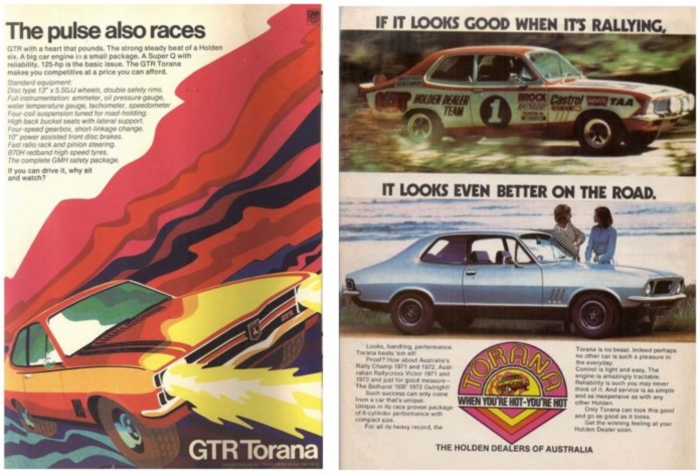 Torana Advertisements from the 1970s

I believe I can fly

In the 1970s, car rallying in Australia had a small but dedicated following.  The Confederation of Australian Motor Sport (CAMS) was the internationally recognised motor sports body in Australia and consisted of a number of motor sport clubs. CAMS operated at local levels and representation of racing in the ACT was allocated to Group 1 of the NSW Chapter, known as the Southern Districts Motor Sports Association (SDMSA). The SDMSA consisted of the following local clubs:

CAMS was responsible for running the Australian Rally Championship (ARC) which was first run in 1968 and is still run today. In 1973, ARC was won by a local Canberran Peter Lang and his navigator Warwick Smith. Lang and Smith won the championship in their Torana LJ GTR XU-1 which was the racing car of choice in the early 1970s, both on-road and off. 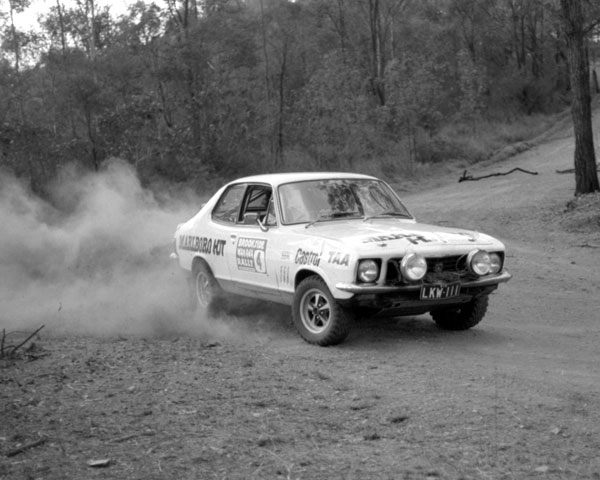 Torana comes from an aboriginal word meaning ‘to fly’, and fly they did, with the model above placing first, second and third in ARC in 1973. It was also the car of choice in the 1973 Touring Car Championship, with drivers including Peter Brock, Dick Johnson and Bob Jane. Ford fans would have been delighted however, when despite the Torana’s dominance they were all pipped at the post by Allan Moffat who took out the Championship in his Ford XY Falcon GTHO Phase III!  Several Toranas were entered in the ARC in 1973 and many of these would go on to enter the Don Capasco.

High on the success of our local racer Lang and with the combined resources of the SDMSA clubs behind them, local enthusiasts dreamt big and the idea to design and run a professional rally was born. Although there had been a few local car rallies in ACT Forests, an international standard event had never been attempted and the press reported the plan as both imaginative and ambitious.

Extract from the Director, Peter Lang’s report on the Don Capasco 1974

Securing a commercial sponsor in Don and Capasco, a patron in local Labor MP Kep Enderby, and with Peter Lang on board as race director, serious planning was able to get underway.  The SDSMA approached the Forestry Branch to secure permission to use locations in Stromlo and Pierces Creek. 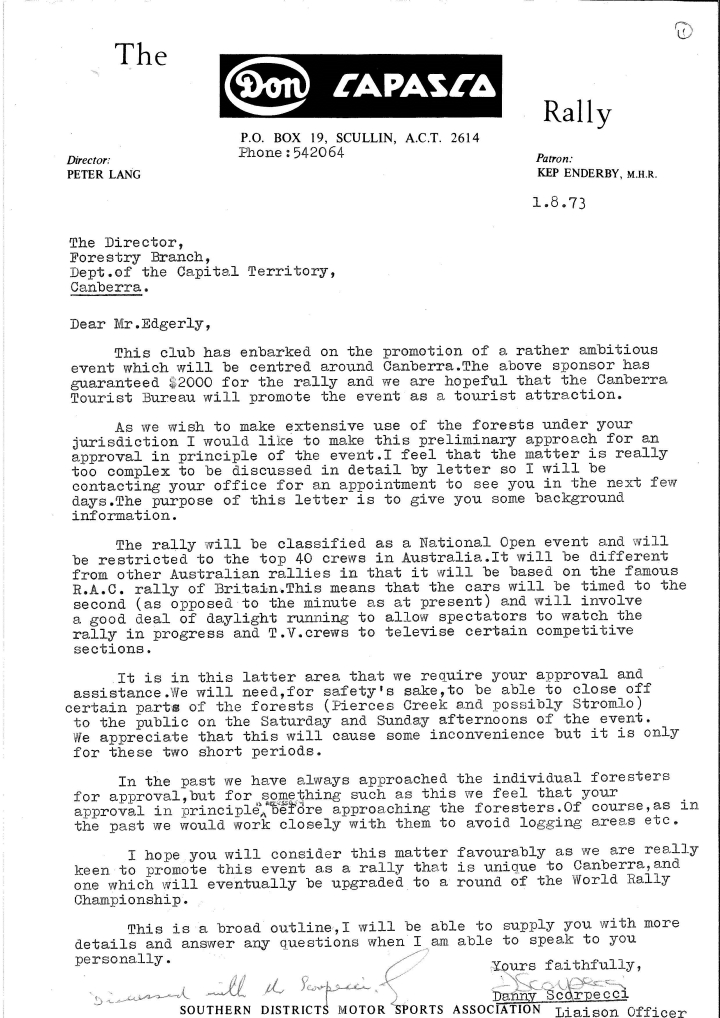 Original request for permission to use ACT Forests

A subsequent meeting with the Forestry Branch saw some changes to the original proposal.  Concerned that ‘ordinary picnickers’, cyclists, horse riders and other users would lose access to the public spaces, the race committee was denied access to certain parts of Stromlo and Pierces Creek. This limited the daylight routes and subsequently meant that day two became a repeat of the day one route.

Traditional rally racing in Australia was not considered very suitable for spectators, it was mostly run at night, was rarely broadcast on television, and the use of timed stages meant that rallies lacked the buzz that a road race could generate, with the winner not necessarily being the first car to cross the finish line. The Don Capasco offered something very different. Based on European rules, this rally would offer spectators a real opportunity to be involved with rallying. Although the race was originally planned to start and finish at Woden Plaza, at some point this was changed so that the race started at Alinga Street in the City and finished at the Griffith Centre, visiting three forests in between. Scrutineering of the vehicles took place at the BP service station in Lonsdale Street, Braddon. The ACT Police and the Traffic Branch were involved in planning and controlling road closures on the day and ensuring that the racers and the spectators adhered to the road rules whilst on public routes. A night time division was also planned. Each stage was timed with the best times dictating starting positions for each next stage. The starting list read like a who’s who of Australian racing. Many of these racers would go on to be inducted into the racing hall of fame including one of our own, ex-public servant Greg Carr, who dominated the Australian rally scene in the 1970s and early 80s.

Setting up the course took three days. There were over seventy arrows and one hundred signs to put in place, as well as spectator ropes, barriers and official positions at key locations for marshalls. In all over 300 control officials and marshalls were put in position by transports travelling ahead of the competitors. With most of the funding allocated as prize money, the organisers relied on willing helpers and freely sourced materials.

Local television station CTC TV were keen to telecast the rally live and provided regular advertisements and a promotion prior to the race. The Canberra Times ran several pre- and post-race articles, and local radio were also involved on the day. Although coverage in the ACT was good, the organisers were disappointed that the race wasn’t given better coverage on a national scale, and this was something they proactively worked ahead of time to change before the next race.

Scoring for the Don Capasco was progressive with the organisers planning to score to the second instead of using the traditional approach of to the minute scoring. Scores were transmitted by hand held radios from agreed points within the forest and then fed through a computer program developed by Russ Whitty, a member of the organising committee, into a 930A programmable calculator which progressively analysed and reported on the results of each stage.  Unlike other races, this meant that the scores were almost immediately available as the cars finished, which made for a better spectator experience. The 930A calculator was chosen for its reliability, ten hour battery and ‘massive’ 8K memory.

You take the high road

The most infamous part of the track is still one of the most famous rallying landmarks in Australia. The deadly “mineshaft” a road so steep that driving up it is near impossible, and going down? This video from the Castrol International Rally in 1980 shows exactly why the mineshaft earned its reputation, fast forward to 11:07 to catch the moment when internationally renowned Finnish driver, Ari Vatanen flies over the top in his Ford Escort, narrowly missing spectators on his way down. 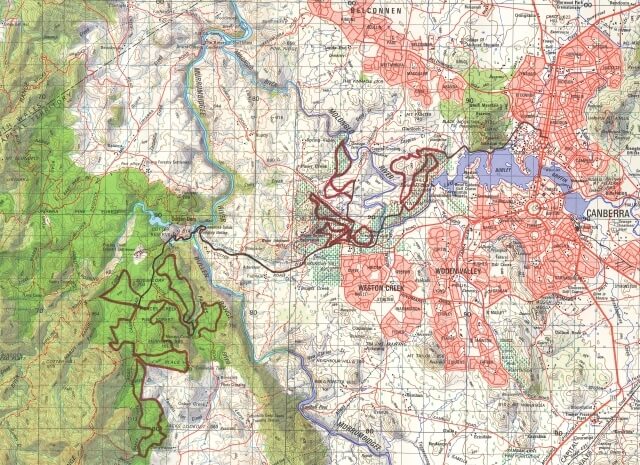 Footage from the Don Capasco is also available online thanks to some local film makers, and it is well worth a look as it includes footage of Braddon, Civic and the forestry areas and also includes interviews with local drivers.

The winner takes it all

The inaugural Don Capasco was won by previous ARC winner (1970) Bob Watson (driver) and Jeff Beaumont  (navigator) in their Renault Alpine A110. The Renault was in Australia for show and was not supposed to be driven, which is said to have caused some friction with Renault management in Europe. Although Watson was an experienced rally driver, he had never even been in an Alpine before, let alone driven one, so on the way down to Canberra they stopped and took it off the trailer so that he would at least have taken it for a spin beforehand.

In an interview with Speedcafe in 2013, Watson nominated winning the Don Capasco as his favourite rally memory and had this to say about the Renault:

The car was just so easy to drive; it was like a go-kart …we had no spare parts at all and we had to make do with stuff we had from our Rallycross car and scratched around for a few extra tyres and so forth. The car was so brilliant that we just walked away with the event. The final results from the rally are listed below, and if you are interested in exploring the full results of each stage you can download the pdf. Such is the nature of rally driving that the hot favourite Colin Bond and young gun Peter Brock both encountered car problems which saw Bond withdraw with a broken diff and Brock run out of time in Division one due to a broken axle.

On the road again…

After the initial race was run the Forests Branch undertook an environmental impact statement of the areas used in the race.  The Director of the race also wrote a comprehensive report on the process and the findings of both reports were overwhelmingly positive, and on this basis planning began for a second race. The second race would be bigger and better and opened the door for a truly international rally to be held in the ACT. And so the Castrol International Rally was born and would continue to be run in ACT Forests until 1981. 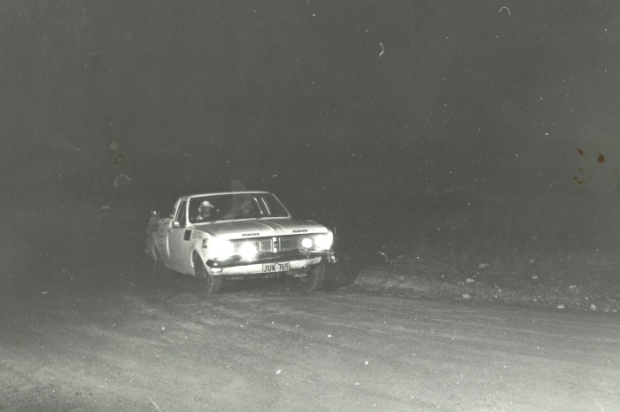 We hope you have enjoyed joining us for a look at car rallies in ACT forests.  Do you have any photos you would like to share?  Why not tweet them and don’t forget to include @ArchivesACT.

Ready to start your own research? Contact us through our Request a Record service and we will be happy to help.