The NCDC goes up in smoke 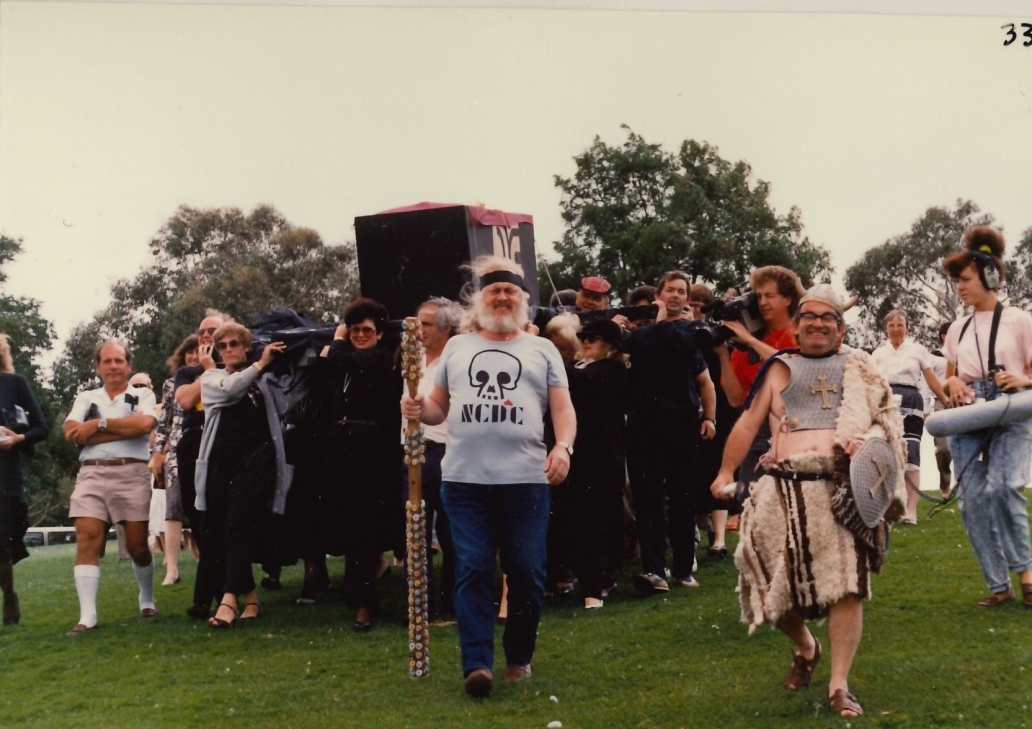 The public servant. Long derided as inflexible, bureaucratic, and bland. It stands to reason then, that for Canberra, as a city teeming with public servants, chances to be heard were few and far between. Politicians, journalists and celebrities all have a view about the culture of the public service in Canberra, with author Bill Bryson once describing it as “Canberra, why wait for death?”

ArchivesACT has often explored the relationship between the public service sector and our city, and it was with great delight that we recently uncovered a series of photographic records that speak volumes about both. On the 1 February 1989 staff from the National Capital Development Commission (NCDC) social club came together one last time to host a mock funeral in a salute to the end of the NCDC. The NCDC was abolished after the Australian Capital Territory (Self-Government) Act 1988 with many of its functions, staff and files passed on to the new ACT Government. The remaining functions were passed to the National Capital Authority (NCA) which was established under the Australian Capital Territory (Planning and Land Management) Act 1988 to undertake the Commonwealth role in the development of the national capital as the Seat of Government.

These records demonstrate the good nature of the public servants employed by the NCDC. United by their changing circumstances, and with a rare opportunity to ‘down tools’, they used humour to show their support of each other and their work, and in doing so they give us a glimpse into the people behind the machine.

ArchivesACT hopes you will enjoy these photographic records on the funeral of the NCDC as the November Find of the Month.

ArchivesACT found these photos tucked away in a larger collection provided to us by the ACT Planning and Land Authority , we have no context around them and we have had to turn to our friends at the Canberra Times accordingly. In their article on 2 February 1989, the Canberra Times reported that the funeral was held by the NCDC social club and it included a procession led by a piper. The collection starts with the ute delivering the ‘coffin’ to the front of what we now call Nara House and then travelling to Regatta Point to unload its precious cargo. If you squint you can even make out a person sitting on the back of the ute… 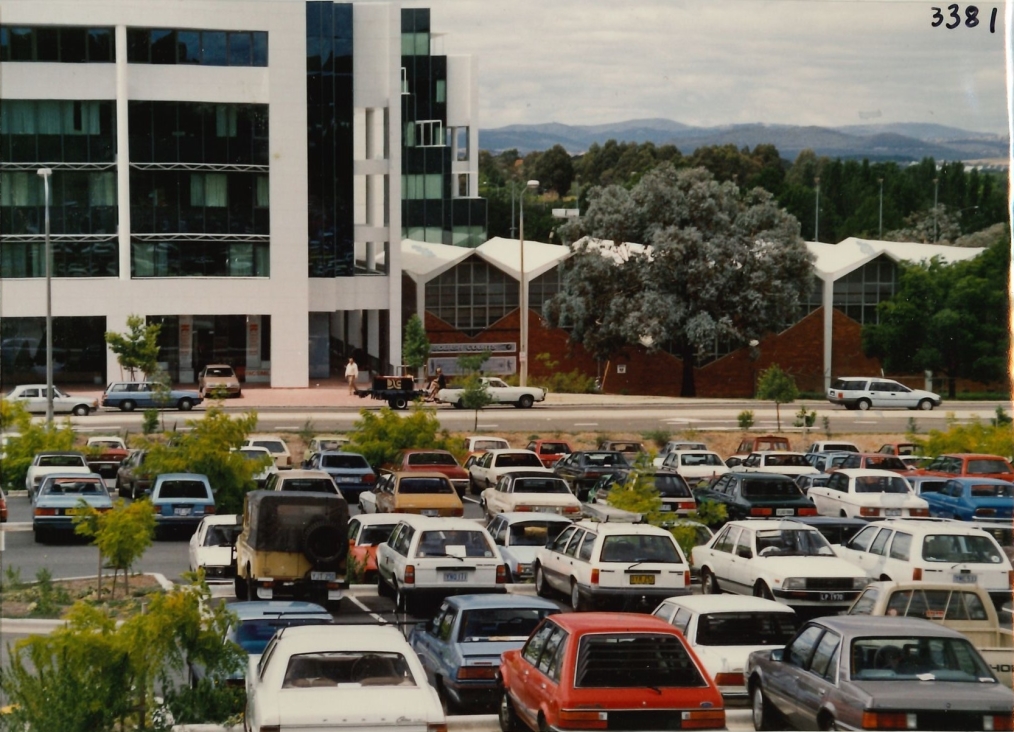 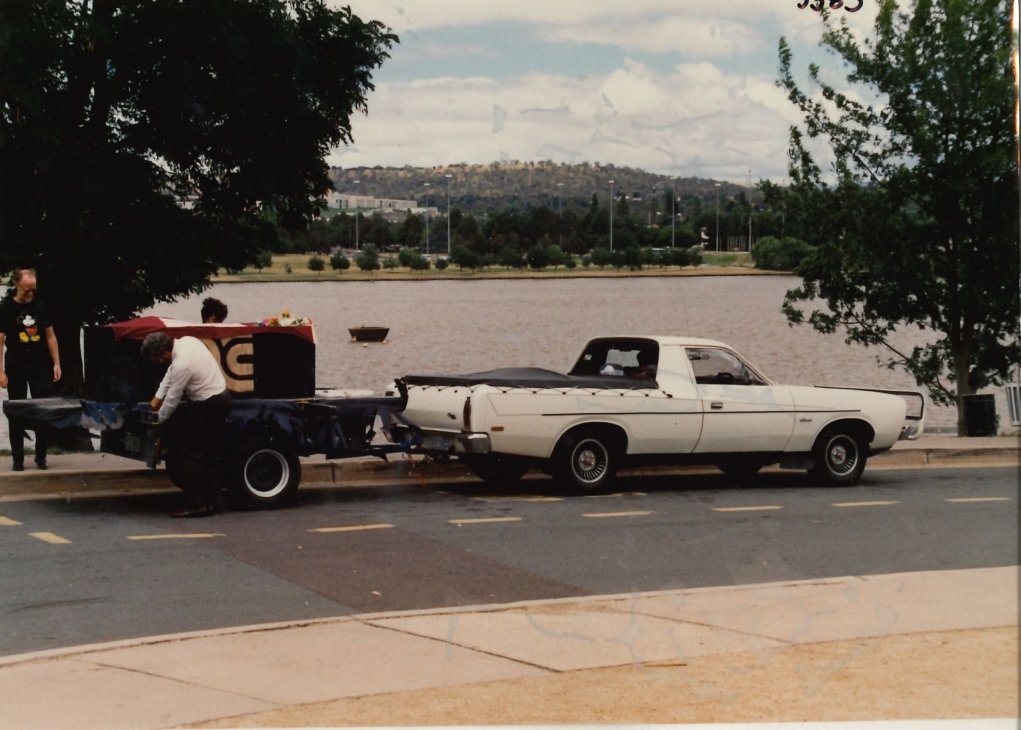 The coffin was reportedly placed on a raft left over from the previous year’s Wacky Raft Race and draped with the NCDC flag. On reaching their destination, the staff organised themselves with pallbearers carrying the coffin down to the waterside. 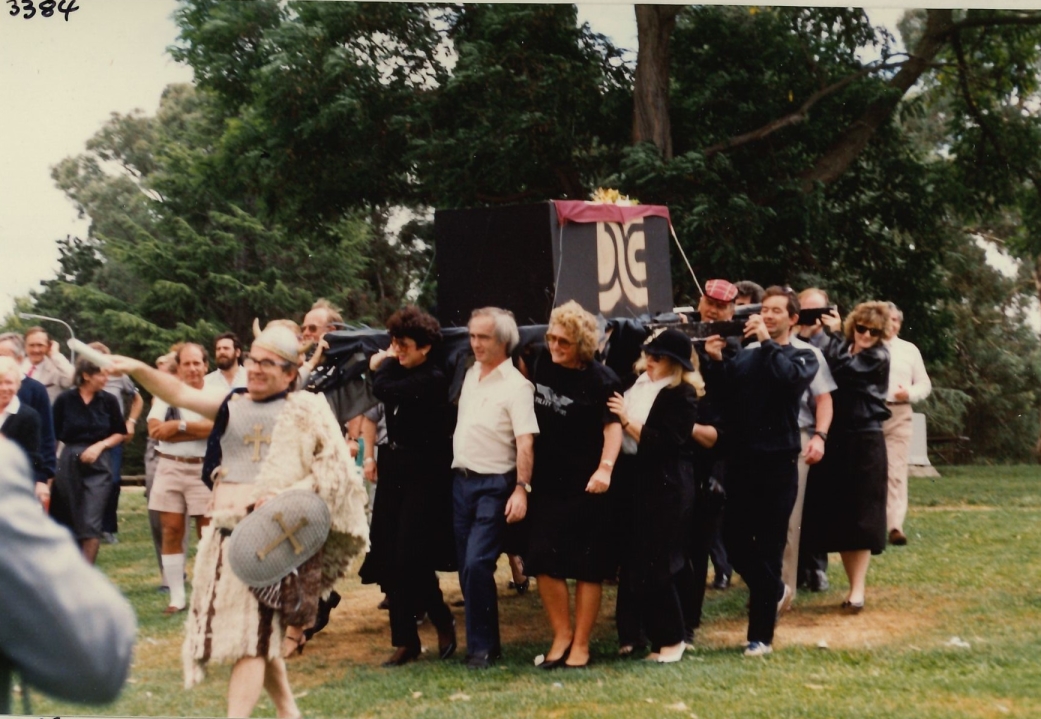 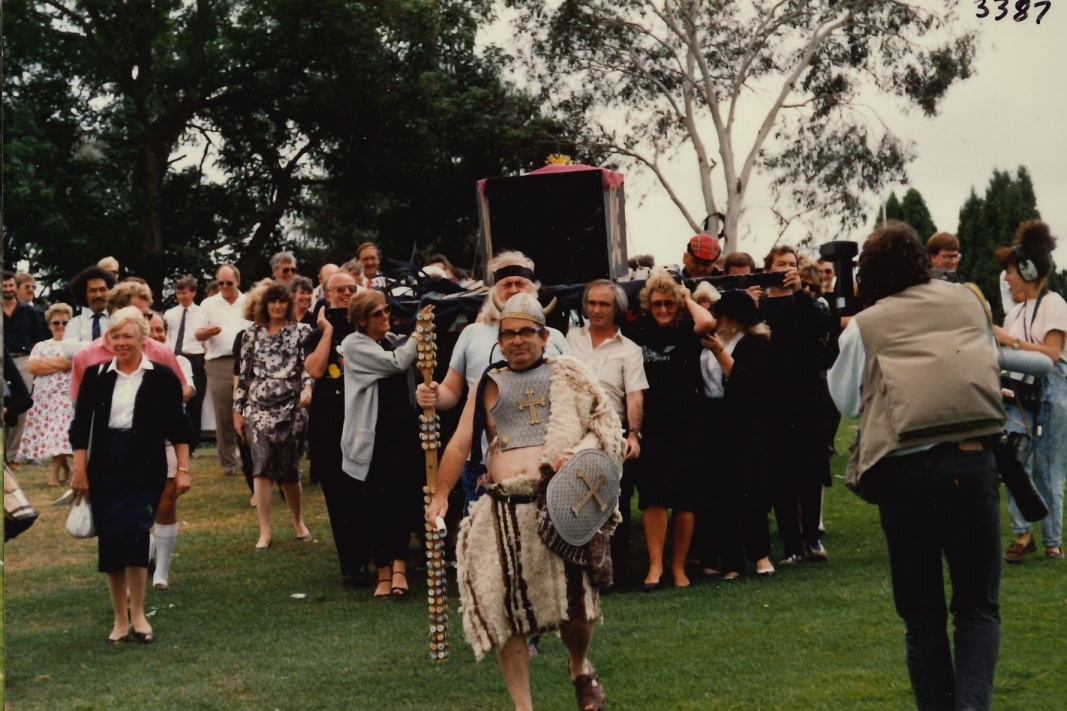 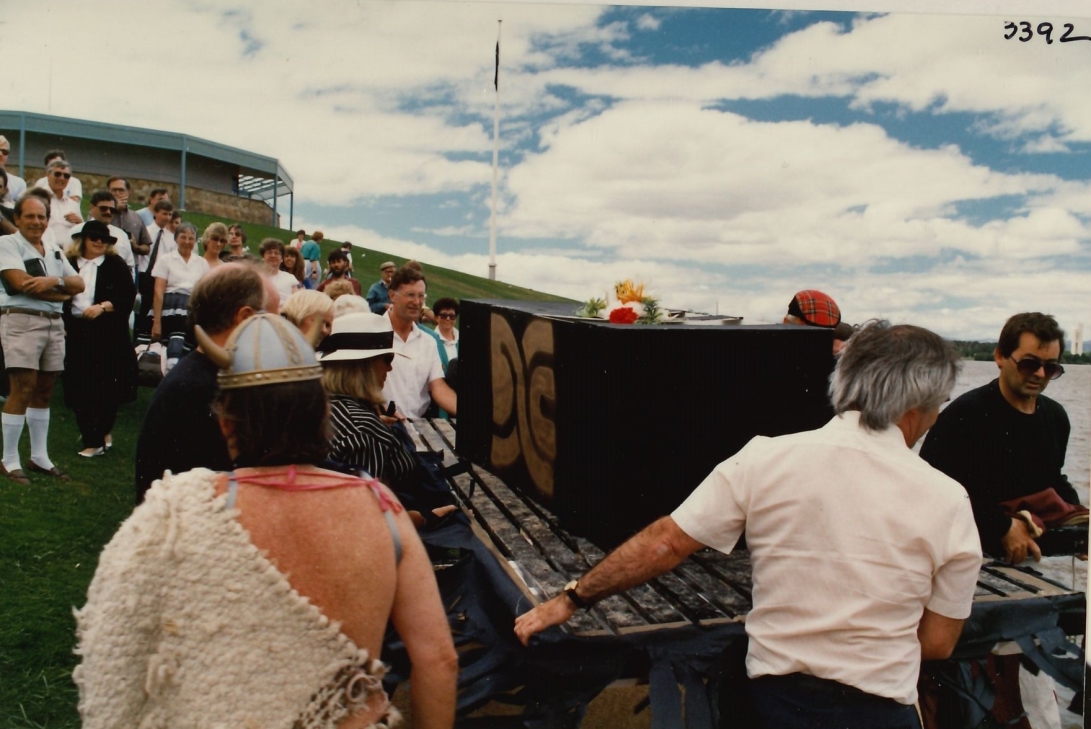 You can leave your hat on… 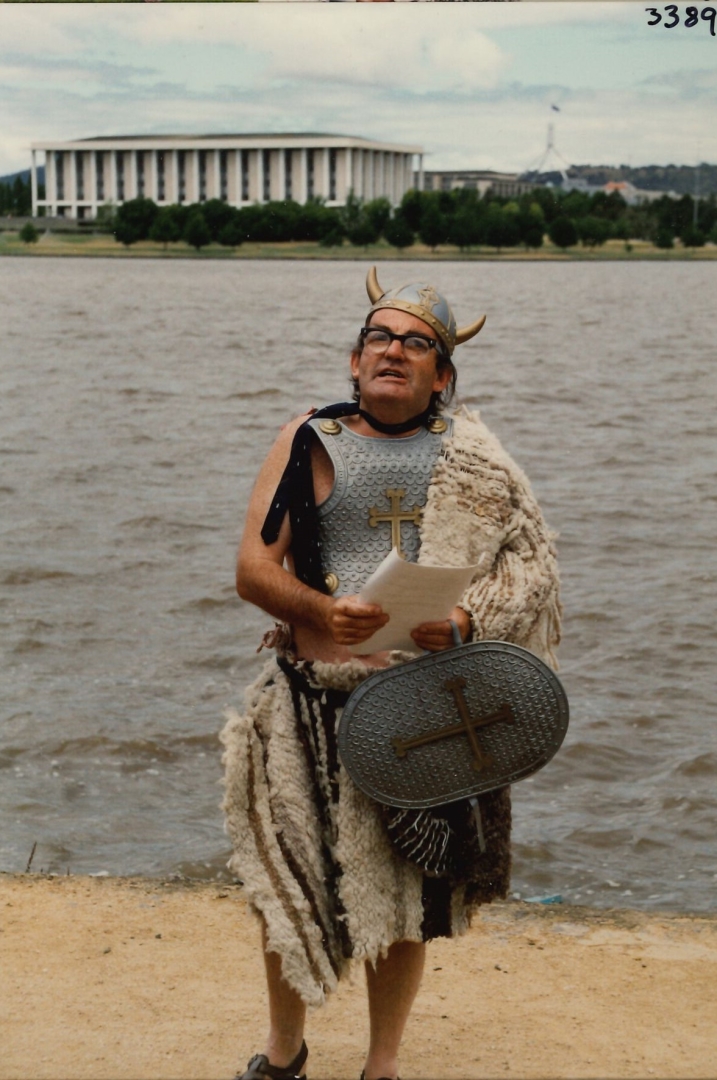 Well known Canberra journalist and former NCDC director, Alan Fitzgerald, was asked to perform the eulogy at the service. Alan was known for his satirical articles, often taking the mickey out of the NCDC prior to taking up a role in its ranks. Dressed as a viking and accompanied by a sidekick with a Lagerphone, he started his speech by proclaiming:

“Friends, Canberrans, Civicmen, lend me your ears, I come to bury the NCDC, not to praise it” 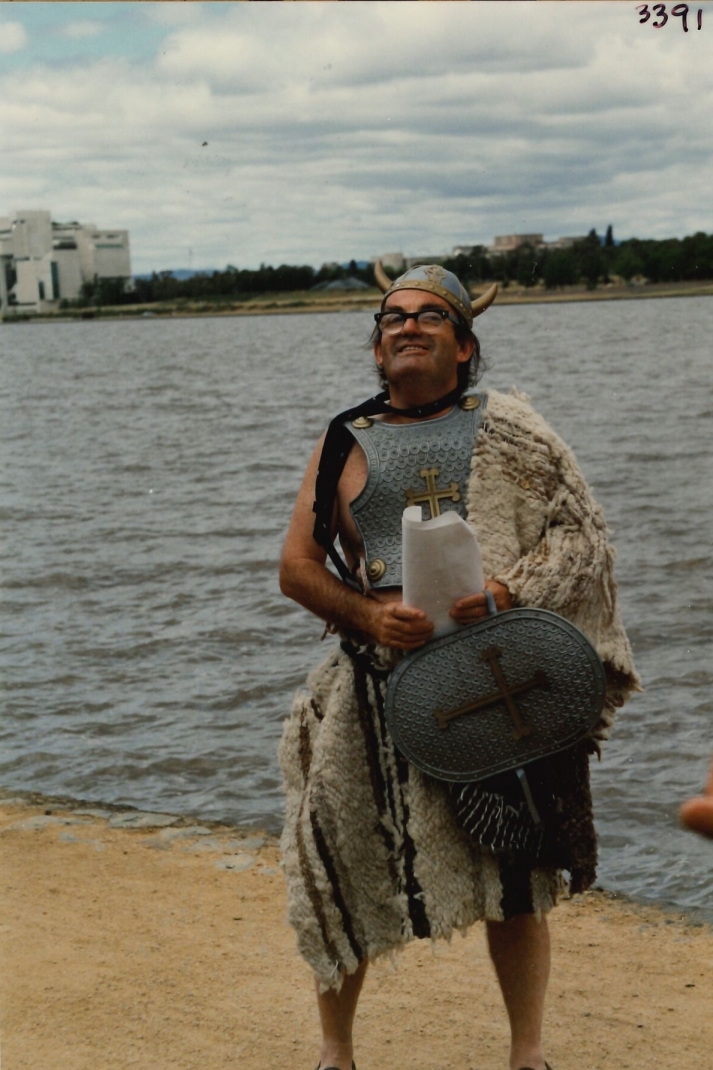 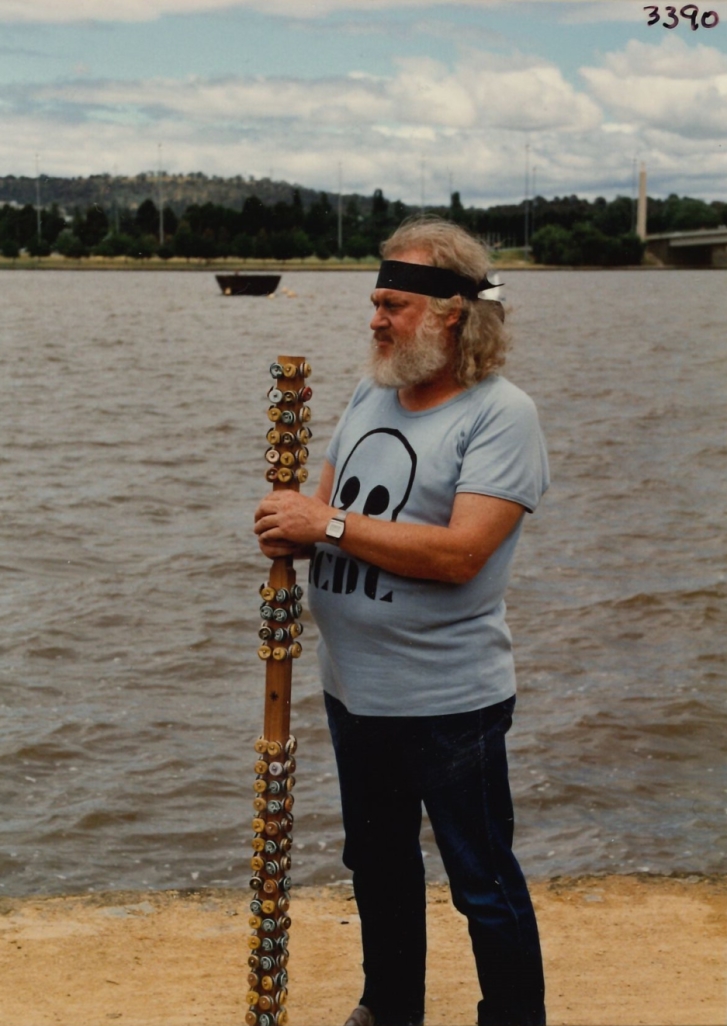 Just who is the mysterious assistant with the Lagerphone?

The end is nigh! Unfortunately things didn’t go to plan, one canoe capsized no doubt adding to the hilarity of the occasion, and the fire resulted in a large amount of smoke which was thought to be the product of residual fuel and sand still held in the 44 gallon drum. 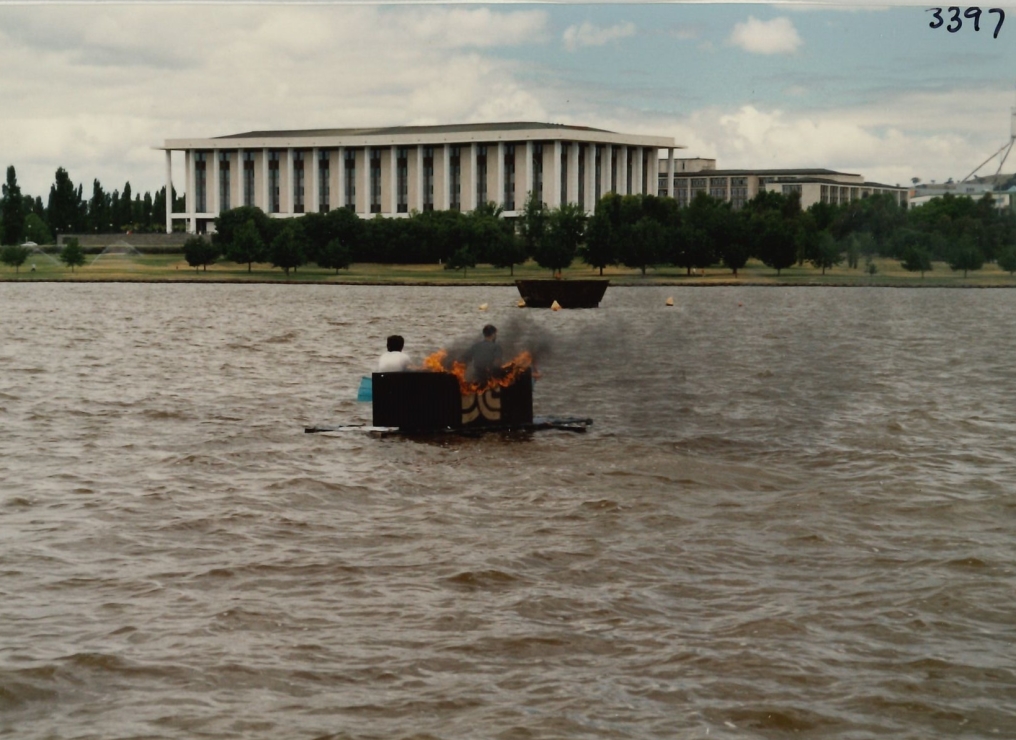 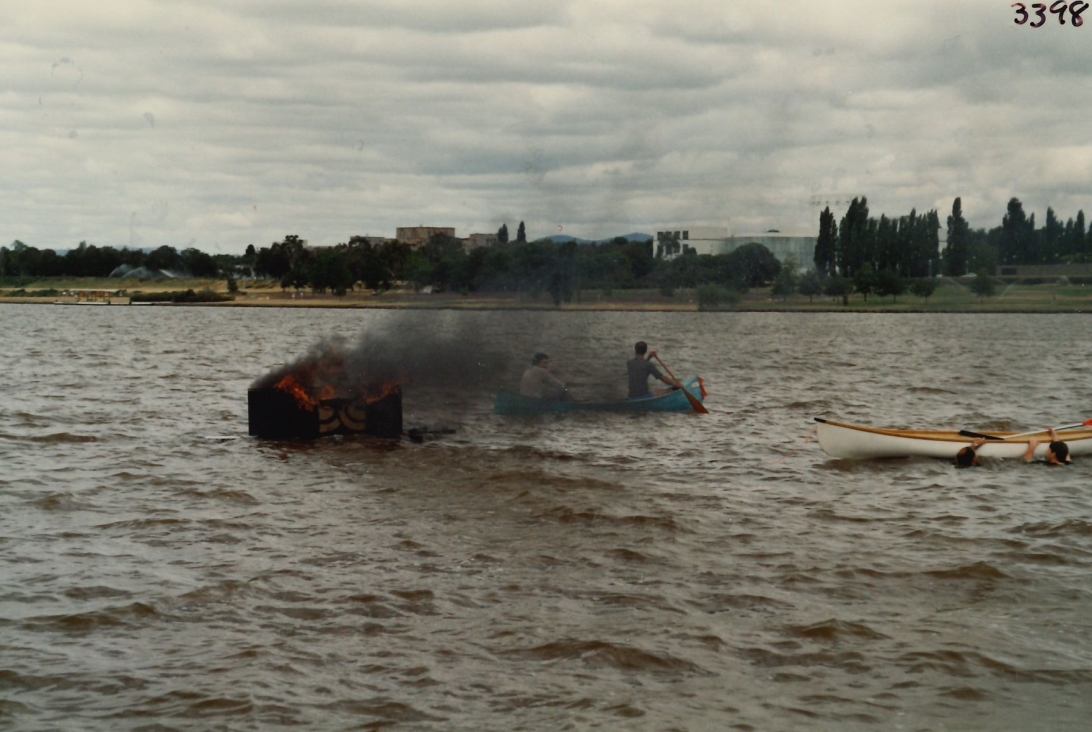 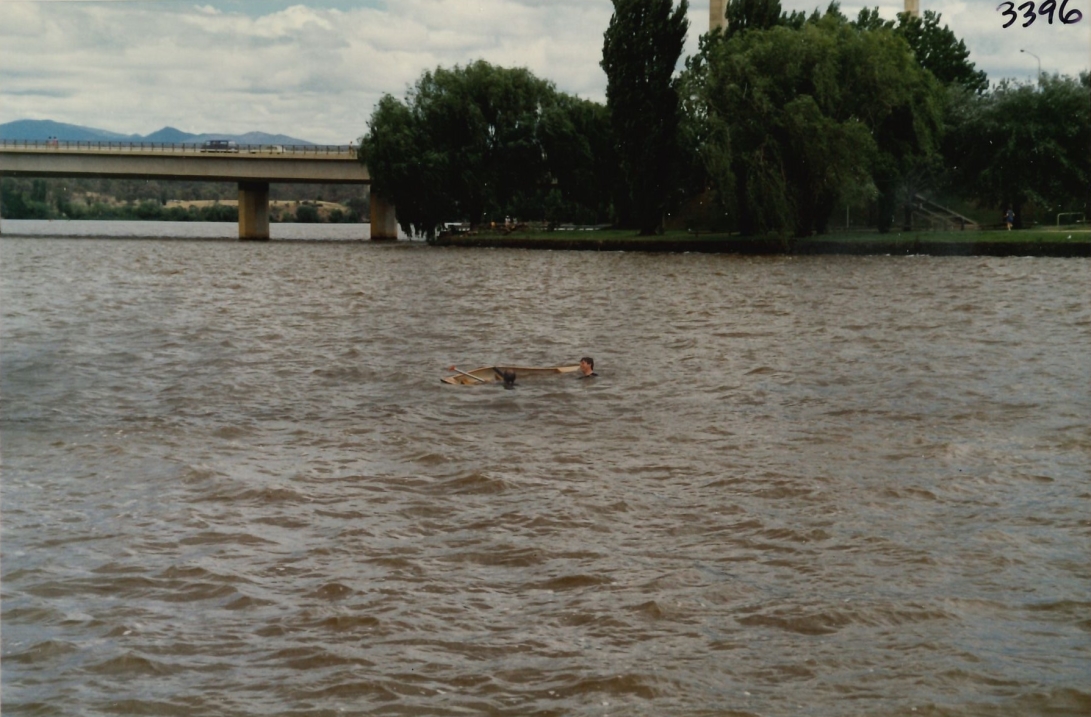 Many of the people involved in this ceremony would have come to work for the fledgling ACT Government, bringing their sense of community and good spirits along for the ride. If you participated in the ceremony or can identify any of the people in these photographs, ArchivesACT would love to hear from you.