"A very cheap type of pavilion"

In 1928, while several tennis clubs featured pavilions at their courts, these facilities were often quite rudimentary. A 1929 FCC review of existing tennis pavilions described them as "a very cheap type of pavilion which is not sewered or provided with water supply or light, but merely with batten seat and crockery cupboard has been provided at a cost of (approx.) £100." In particular, the tennis pavilion at Westridge was noted as being "in a very bad state of repair and seems to have been deliberately knocked about."

In August 1928, the new Reid Tennis Club requested construction of two tennis courts. The Club anticipated a membership of 70 to 90 people with the courts serving around 100 households. On the 11th September 1928, FCC Assistant Secretary, H.R. Waterman, sent a memorandum to the Executive Architect to design a more substantial pavilion than those previously built:

"Will you kindly prepare a requisition for one tennis pavilion in association with two tennis courts, a requisition for which the Acting Chief Engineer is preparing. The type desired is brick base with timber superstructure and tiled roof, on the accommodation basis of the Northbourne Tennis Club pavilion."

In addition to this pavilion, the FCC was also preparing plans for others in North Canberra. In a memorandum dated the 26th September 1928, the Executive Architect stated:

"I have been instructed to prepare designs for pavilions in the following positions: -

Once again, some of these locations are a little vague. A memorandum dated the 12th of February 1929, clarifies the exact locations. North Ainslie is the reserve between Farrer Street and Elder Street in Braddon and South Ainslie is the Recreation Reserve between Reid Sections 28 and 29. The estimated cost of for newly designed pavilions was between £250 to £275, plus the Commission's overhead charges. No mention is made as to exactly what these "overhead charges" consisted of.

In January 1930, Commissioner Goold informed Honeysett that clubs using courts where pavilions are to be erected would need to agree to a £5 per annum increase to their rent. The rent increase was to assist in paying for the expenditure involved in providing the new facilities. Neither the Ainslie nor Braddon Tennis Clubs indicated their willingness to pay any additional rental for a new pavilion.

With the onset of the Depression in 1929, the FCC instead approved a cheaper pavilion for the Reid Tennis Courts costing only £150, which was erected. However, even this design proved to be too expensive for use at the Ainslie and Braddon sites. By April 1930, the original concept of providing pavilions at these courts had been deferred indefinitely for financial reasons. As a temporary measure it was decided by the FCC to offer two smaller "cubicles" at each court, for storing the clubs' court gear, at a cost of £43 per court. Both clubs were "agreeable to the proposal." Reid Tennis Courts, May 2015.
While this pavilion has long since gone, the courts remain now featuring a synthetic playing surface.

The taxing of tennis

In June 1931, the Federal Capital Territory Lawn Tennis Association submitted for "earnest consideration of the Administration that a review be made of the rentals charged for tennis courts both to the Association and the various district Clubs." It was felt by the Association that tennis was heavily taxed, by way of rentals, in comparison to other sports such as golf, cricket or football. They also made the point that "maintenance costs of the areas used is so great as to engender a feeling amongst the devotees of tennis that they are being most unfairly dealt with."

The Chief Lands Officer, A.W. Edwards, assured the Association that the rent initially laid down by the FCC in 1928 was still valid and not considered excessive as "the revenue does not return to the Commonwealth interest on the initial outlay." Edwards also indicated that it was determined that the existing charges for all sporting facilities would remain while the transfer of the Public Service to Canberra from Melbourne was completed.

However, by December 1931 the FCC reconsidered the request of a rent reduction for the Association on the six Manuka Courts. The FCC noted that the Associations' only sources of revenue were by way of Club affiliation and the conduct of competitions. With this in mind, and in light of an assessment made on the self-maintenance costs not required by other sporting groups, their rent was reduced by £10 a year. This reduction only applied to the Association Courts in Manuka, district clubs were still required to pay their existing rent as volunteers managed all maintenance for these courts. 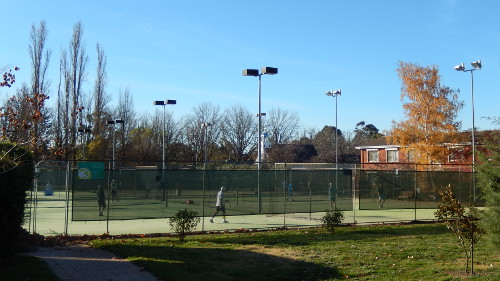 The FCC's tennis courts file offers a glimpse into the early popularity of the sport by the community and how the burgeoning clubs developed into an organised body. It also shows that details of the history of our city can turn up in some surprising places in the archives.

We are also fortunate that FCC photographer, William James Mildenhall, documented the activities of Canberra's tennis community during this period. You can find Mildenhall's photos of tennis in Canberra here: Discovering Mildenhall's Canberra (tennis)

With the recently opened $27 million Canberra Tennis Centre in Lyneham, it is interesting to see how tennis has grown in Canberra from such humble beginnings. That many of the tennis clubs and facilities formed in the 1920's still exist today shows the continuing strength of the sport and the dedication of the community and Administration who supported it. 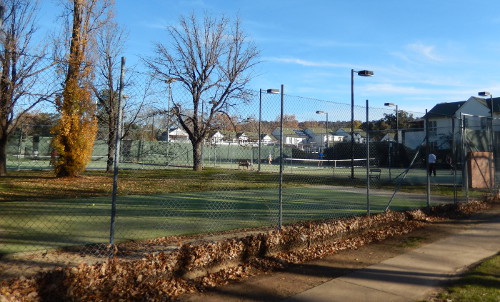