ACTION selected the top four drivers from each depot through a series of heats held during the 1993 June-July school holidays. The successful 12 drivers then competed in the ACTION Mack Bus Roadeo on the 17th October 1993. Unfortunately, the National Champion for the previous two years, Richard Kulacz, could not defend his title for a third year in a row, narrowly missing out in the qualifying rounds. 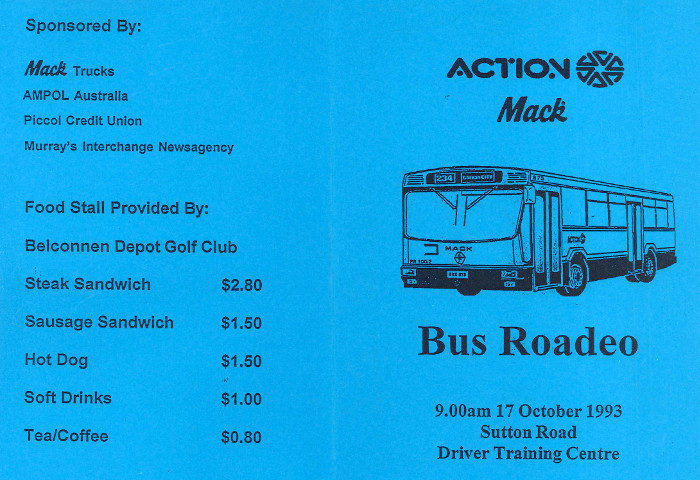 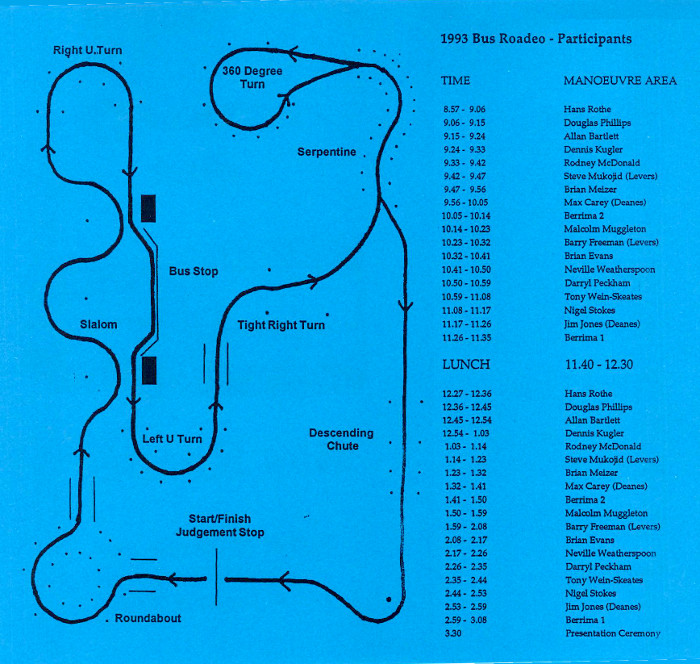 Brian Meizer won the 1993 ACTION MACK Roadeo with Nigel Stokes runner-up. At the prize presentation, David Lamont MLA described how the roadeo "provides ACTION's bus operators with a unique opportunity to demonstrate their skill and driving techniques on a very demanding course."

"Very Tight and Bordering on the Impossible": 1993 National Bus Roadeo

For the 1993 National Roadeo ACTION decided to use its latest MACK Bus 993, a Renault PR100.3. Once again, the support crew drove the bus to Adelaide. After the previous year's trip, the crew requested the addition of a few creature comforts to help relieve boredom during the journey. They hoped for an AM/FM radio (to replace a portable unit sitting on the dashboard) and a temporary CB radio, along with mounted card tables to replace the bars between the 'seniors' seats'. The ACTION Roadeo Committee sent a request for these modifications to ACTION's Development Engineer. At the 18th May 1993 Roadeo Committee meeting he was reported to have given the verbal response "no on all matters." 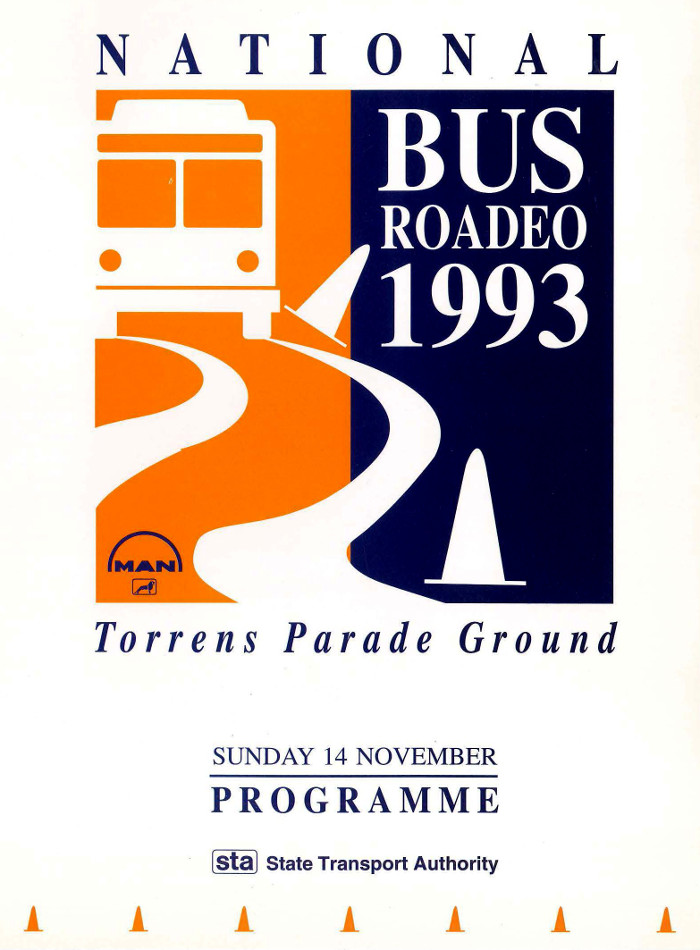 1993 National Bus Roadeo Programme cover. You can download a PDF version of the full programme here: (

According to an ACTION report, all competitors in the 1993 National Roadeo had two practice runs on the course, described by the drivers as "very tight and bordering on the impossible." This resulted in participants considering "options and strategies to negotiate the course with least penalty points. If I purposely hit the inside kerb (10 points) I will have a better chance of missing the outside cones (5 points each) and could save 20 points."

The report continued, "The overall driving skills demonstrated were of the highest order and a credit to all competitors. Similarly, the interpersonal relations and friendly banter between finalists and officials were impeccable."

Reports on both 1993 Roadeos can be found in the December 1993 issue of Trans ACTION, which you can download here: (

What Became of Roadeo Buses?

ACTION disposed of Bus 690 in January 2005 after 18 years of service. The ACT Bus photo gallery shows Bus 690 in a variety of liveries including the "all over MACK" livery: http://www.actbus.net/gallery/index.php/ACTION-Buses-Disposals/Renault-PR100-2-Mk1/Bus-690

Bus 993 was still in service in November 2014. The ACT Bus photo gallery shows Bus 993 in several locations around Canberra: http://www.actbus.net/gallery/index.php/ACTION-Buses-Current/Renault-PR100-3/Bus-993