The workers' camps and hostels of early Canberra could be lonely places to spend a long winter's night. It's no wonder, then, that the capital soon had its share of billiard saloons, where men (and it was only men) could spend their evenings. Billiard saloons could attract some shady characters, though. In a government town like Canberra they were bound to be closely regulated. Our recently uncovered 'Federal Capital Commission Register of Billiard Saloon Licences' provides a window into this world, and it is the ArchivesACT Find of the Month.

While most ACT Government records focus mainly on the day-to-day administration of the Territory, we sometimes come upon gems that provide glimpses into the lives of everyday Canberrans. This register lists the names and addresses of billiard saloon licensees as well as the location of the saloons that operated in the Federal Capital Territory (FCT) between 1929 and 1942. The number of billiard tables is also listed for some saloons. With its gold lettering and leather spine, the register has a look and feel that evokes the past in a way a computer spreadsheet can't. 'A great boon in the long nights'

The first license issued in this register was to Robert Gordon Jones on 6th June 1929 for a saloon in the White City Camp. Located near the current ANU School of Music, White City Camp was built as a workman's tent camp in 1925 and stayed in operation until 1931.

When the white canvas tents, the source of the camp's name, were replaced by small timber cabins in 1927, a recreation hall for camp residents was also constructed. The Canberra Times reported on the 11th of June 1927 that "The new billiard room is taking shape fast, and ought to prove a great boon in the long nights."(1) 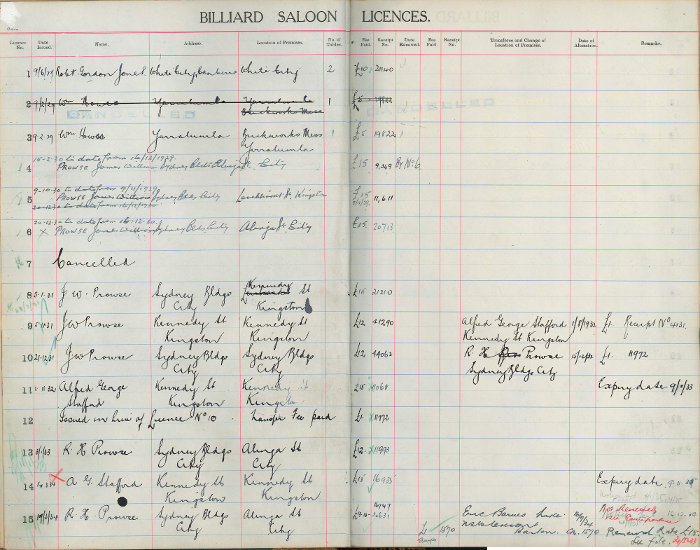 However, we know that the licences in this register were not the first issued. From an earlier newspaper report, it appears that Robert Jones may have been the first applicant for a billiard table licence in the FCT when he previously applied for one with the Queanbeyan Police in November 1926. The "application was adjourned indefinitely" as a Billiard Tables Ordinance for the FCT was still being prepared by the Federal Capital Commission (FCC) at that time.(2) A month later the FCC placed an advertisement in the Canberra Times for billiard saloon licensees at several workmen's camps.(3)

The register also includes an "Application for Licence" and a "Licence to Conduct a Billiard Saloon" for Harold Joseph Preston. Mr Preston, a storekeeper in Jervis Bay, kept a billiard table in the Canteen Store from 1937. This 1943 renewal application and licence relate to the final entry in the register.

A Battle of champions

In May 1929 the Canberra Times reported on two billiards matches "between Walter Lindrum, the world's record holder and contender for the world's championship and Clark McConaghy, champion of New Zealand."(4 & 5) These matches were played in "Mr Jones' Saloon at Kingston" which might indicate Robert Jones also owned the saloon licensed to James William Prowse on 9th November 1929 (Licence no. 5 in this register).

'A Madman with a Revolver'

There was a dark side to billiard saloons which were considered potential locations for illegal gambling activities, a suspicion confirmed by the numerous reports in newspapers of the time.(6 to 9) Gambling activities were not restricted to billiards games but also included dice games like "in and out" and punting on the horses. One raid on a Queanbeyan billiards saloon by undercover police in 1927 resulted in a patron running to the local police station to report "that a madman, with a revolver, was "holding up" the occupants of the billiard saloon".(6) "A fit and proper person to hold a licence"

From November 1926, billiard saloons in the FCT were regulated under the 'Ordinance Relating to the Licensing of Billiard Saloons'. The Ordinance attempted to ensure only the "right sort of persons" were successful in obtaining a licence, and required a "Certificate of Member of Police Force" confirming the applicant:

However being less enlightened times, section 13 of the Ordinance states "A licence shall not be held by any female other than a widow" and saloons were also age restricted with a thirty pound fine for "Any licensee who knowingly permits any person under the age of eighteen years to play on any billiard table..."(10) 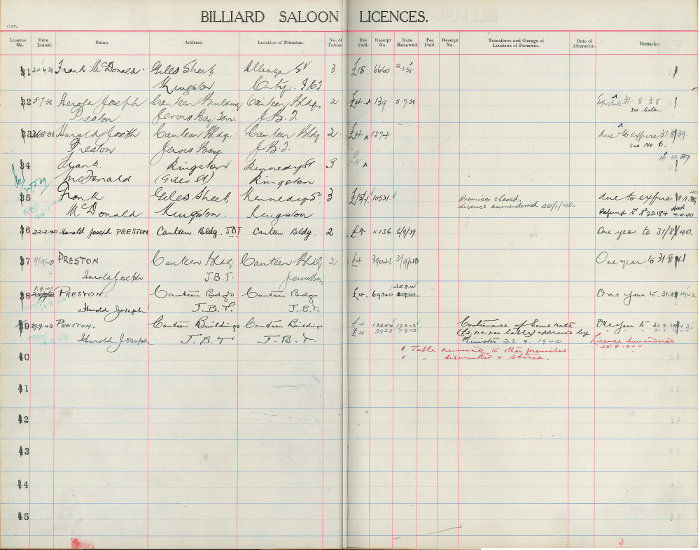 Getting the whole picture

The register gives us a glimpse into the history of the saloon owners and of social life in the 1920s-40s in Canberra and Jervis Bay. Using this register in combination with other internet resources such as National Library's Trove Digitised Newspapers and commercial sites like Ancestry.com helps in providing a more complete picture of our past.

Oral histories are also a valuable resource as we can all remember stories our parents and grandparents told us. ArchivesACT would be interested to hear from anyone who remembers their fathers' and grandfathers' stories of visiting one of these Billiard Saloons: archives@act.gov.au

Don't forget that August is National Family History Month so now may be the perfect time to start looking into your family's past. Researching family history has become an increasingly popular since the advent of the internet. What once required trips overseas to search local archives has now become accessible from home via the internet.