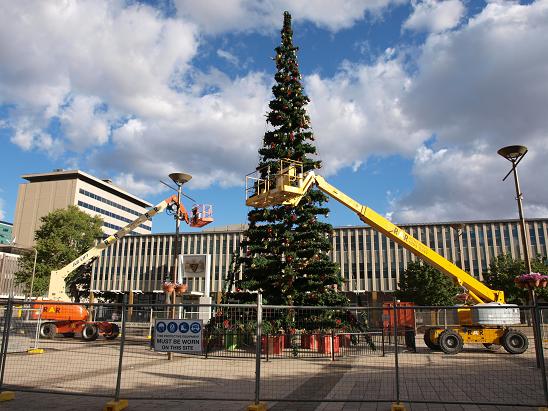 Each year the Department of Territory and Municipal Services is heavily involved with the public Christmas celebrations. Prior to self government it fell upon City Parks Administration to arrange festive lighting and an annual Christmas tree.  This tree was usually sponsored by a business or charitable group.

During the 1960s the Quota Club of Canberra would sponsor a "Giving Tree" in Australia's first shopping mall, the Monaro Mall.  The file 'F66/115 - Forestry - Christmas Trees - Sale of - 1966-1968' documents the Club's annual requests to the Department of the Interior’s Forests Section (now Parks, Conservation and Lands) for a tree. 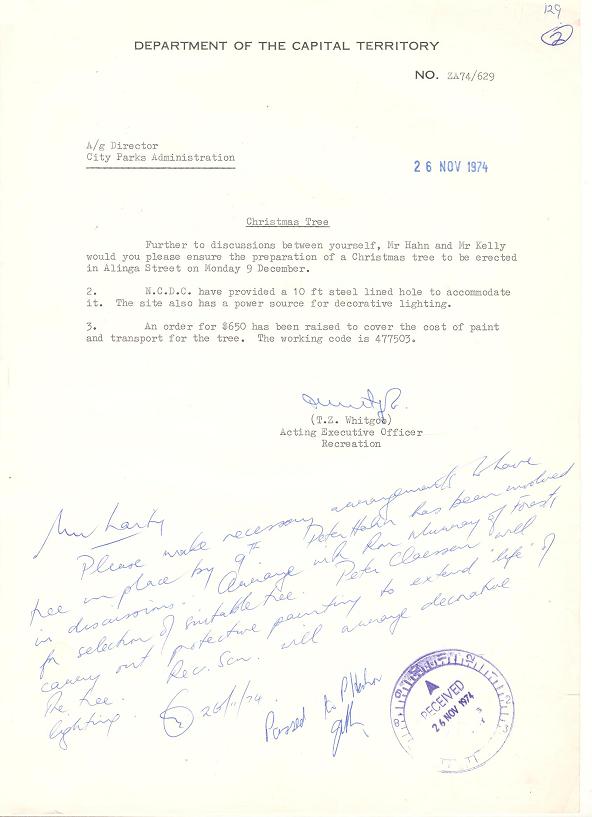 Since then there have been regular calls from local shop owners for the planting of a permanent pine tree in Civic.  They hoped to reduce the recurring costs of erecting a cut tree each year and minimise OH&S concerns when erecting the tree and spray painting the tree in a pedestrian mall.  Temporary trees require two coats of paint to aid in maintaining colour and preventing them from drying out. 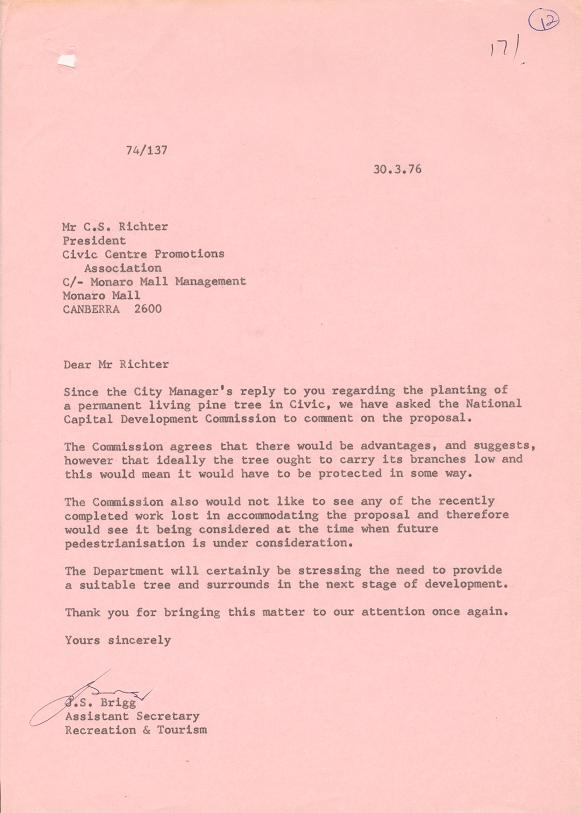 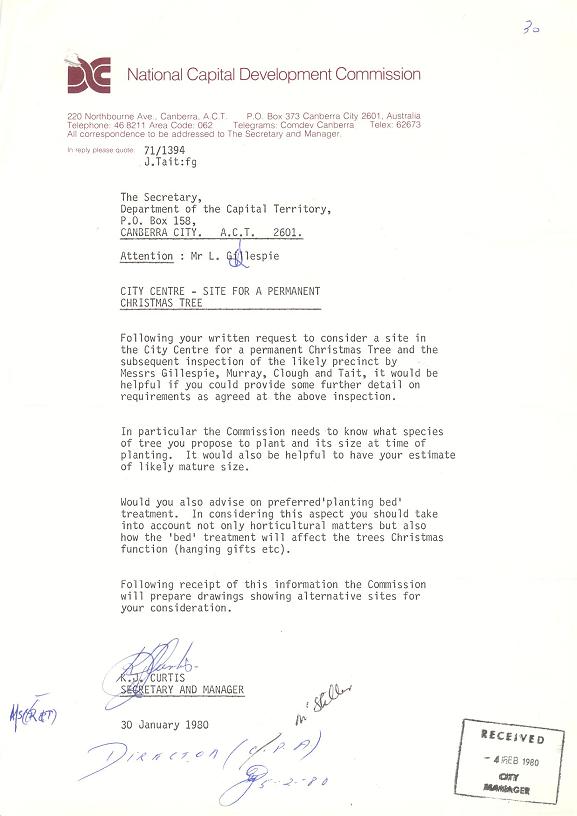 Up until 1980 the Government covered all costs associated with erecting the tree in Garema Place.  From 1980 onwards local businesses and community groups have sponsored the tree.  The Canberra Times sponsored the 1980 Christmas tree and were joined by the Salvation Army and Canberra Scout Association in 1981.  The Scouts manned the tree and accepted gifts and donations on behalf of the Salvation Army. 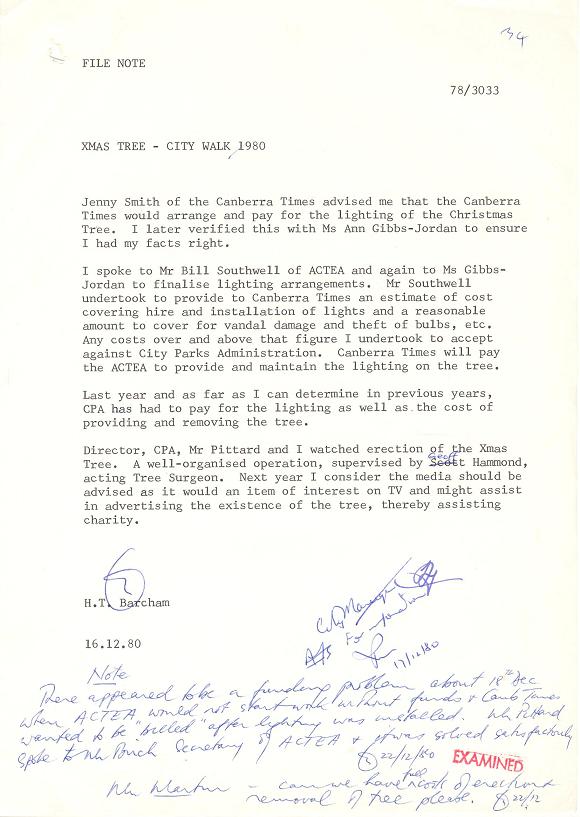 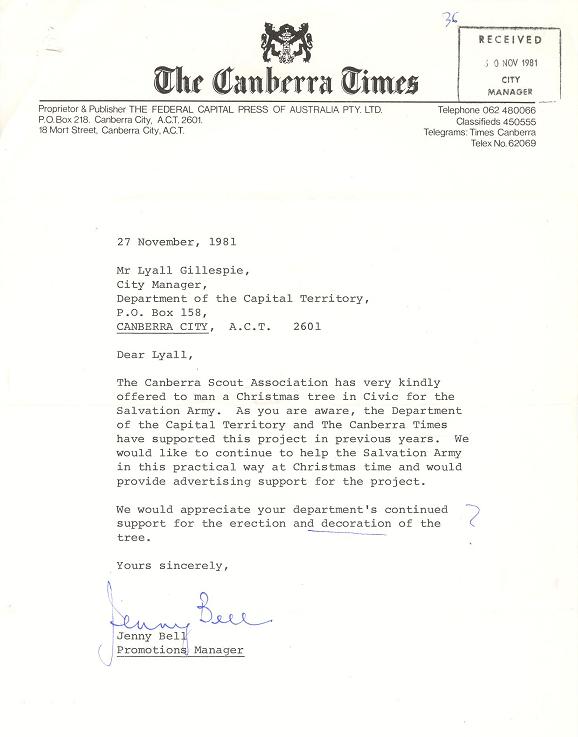 There appears to have been no trees in 1982 and 1983 as the NCDC was not approached to erect one in those years. 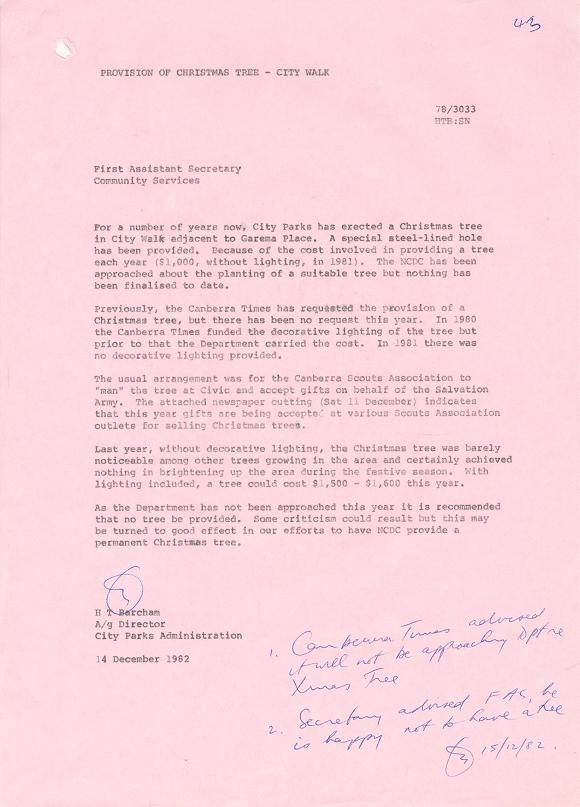 2CA sponsored the 1984 tree with its location moved from Alinga Street to the median strip on Northbourne Avenue to give it a more prominent location.

For those of you old enough to remember, the music playing on this page is 'Australia's Santa Claus' by Michael John Fewster who was a DJ at 2CA during the 1970s. (NOTE: The audio file for this song has been removed, however you can view the official video clip on YouTube here: http://www.youtube.com/user/mjf1811) 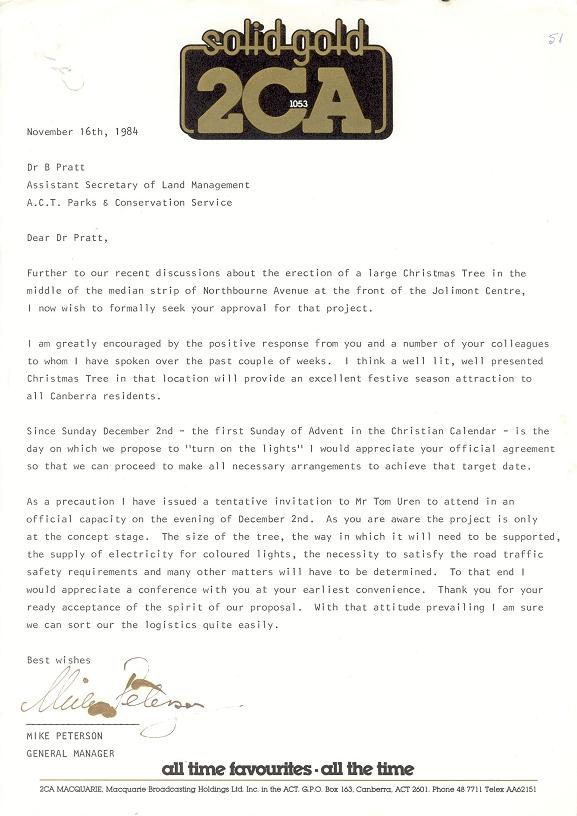 Concerns were raised over the damage to the median strip this tree placement would create. However the use of a smaller tree sourced from near the Albert Hall alleviated this problem and reduced the estimated cost of $3000 down to $952. The Canberra Christmas tree is now positioned in Civic Square in front of the Canberra Theatre and ACT Legislative Assembly.  This is an artificial tree gifted to the ACT Government by the National Capital Authority in 2004.  Prior to 2004 it had been erected in Federation Mall outside New Parliament House.

The lighting of this year's Canberra Christmas Tree will take place in Civic Square on Friday the 4th of December beginning at 7PM.

a happy and safe festive season.