If These Walls Could Talk

Government Property and Tenancy Registers 1925 to 1968

Housebound Canberrans may be feeling that the walls are closing in on them at the moment. Have you wondered what those walls might tell you if they could talk? Maybe it’s time to explore the history of your house? Our Government Property & Tenancy Registers include some of the earliest government records held by ArchivesACT. First created and maintained by the Federal Capital Commission in 1925, they can be used to track the histories of government housing and rural properties for anyone interested in the ACT’s land and property development. The registers document the management and maintenance of government housing properties in the ACT from 1925 to 1968. Many of the volumes have been digitised and can be viewed by visiting ArchivesACT’s website, so we felt it would be timely to re-visit these records, and to provide some examples of the wealth of information that can be discovered in the registers for the May instalment of our Find of the Month.

The registers cover properties for both suburban and rural blocks. They are generally arranged by the relevant land Division and then by block and section numbers. Identifying a particular section can be complicated by changes in Division names or redistribution of block and section numbers, particularly for rural properties. Many of the  urban entries include a street address that can sometimes provide a shortcut to block identification, and another handy tool is the ACT government’s online ACTmapi viewer.

An interesting example is the listing for a house built in 1939 for Richard Gardiner Casey who was the Federal Treasurer, when a residence was built for him so that a member of Cabinet could reside in Canberra i.  The address for this residence now falls within the boundaries of Yarralumla but in 1939 it was part of the Division of Acton and this is where it is found in the tenancy registers. Entries for most suburban registers will include the tenants' names, rental details, type of house, Block/Section/Division (Suburb) and addresses of Government housing in the ACT up to 1968. In some cases, building maintenance details are also recorded. The register documenting the tenancy of 20 Balmain Crescent Acton shows that Charles Studdy Daley moved in to the property while Secretary of the Federal Capital Commission as well as detailed accounts of maintenance work that was carried out, including external painting, the fitting of flyscreens and the installation of a ‘flusherette’ in 1943. 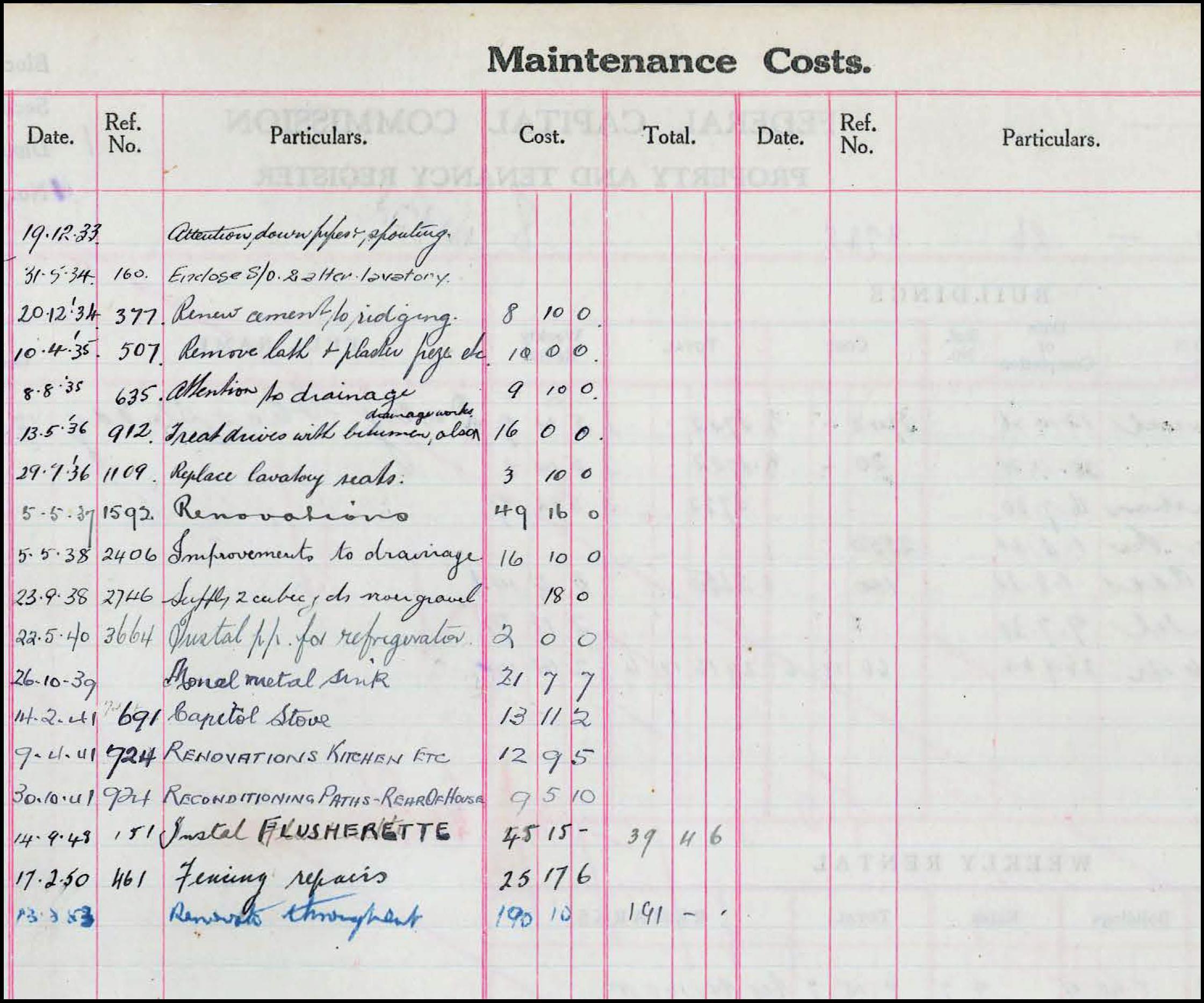 The property and tenancy registers can also be helpful for research on former Canberra settlements and government buildings that no longer exist. The suburban registers record when each building was disposed of and when others were demolished. Former settlements, such as Molonglo, Russell Hill and Westlake are covered in the digitised records, as are the residences known as the Acton workers cottages. Many of these settlement buildings were demolished and the entries for each building were annotated with the date of demolition. Similarly, when other properties were sold, the date of disposal was recorded. 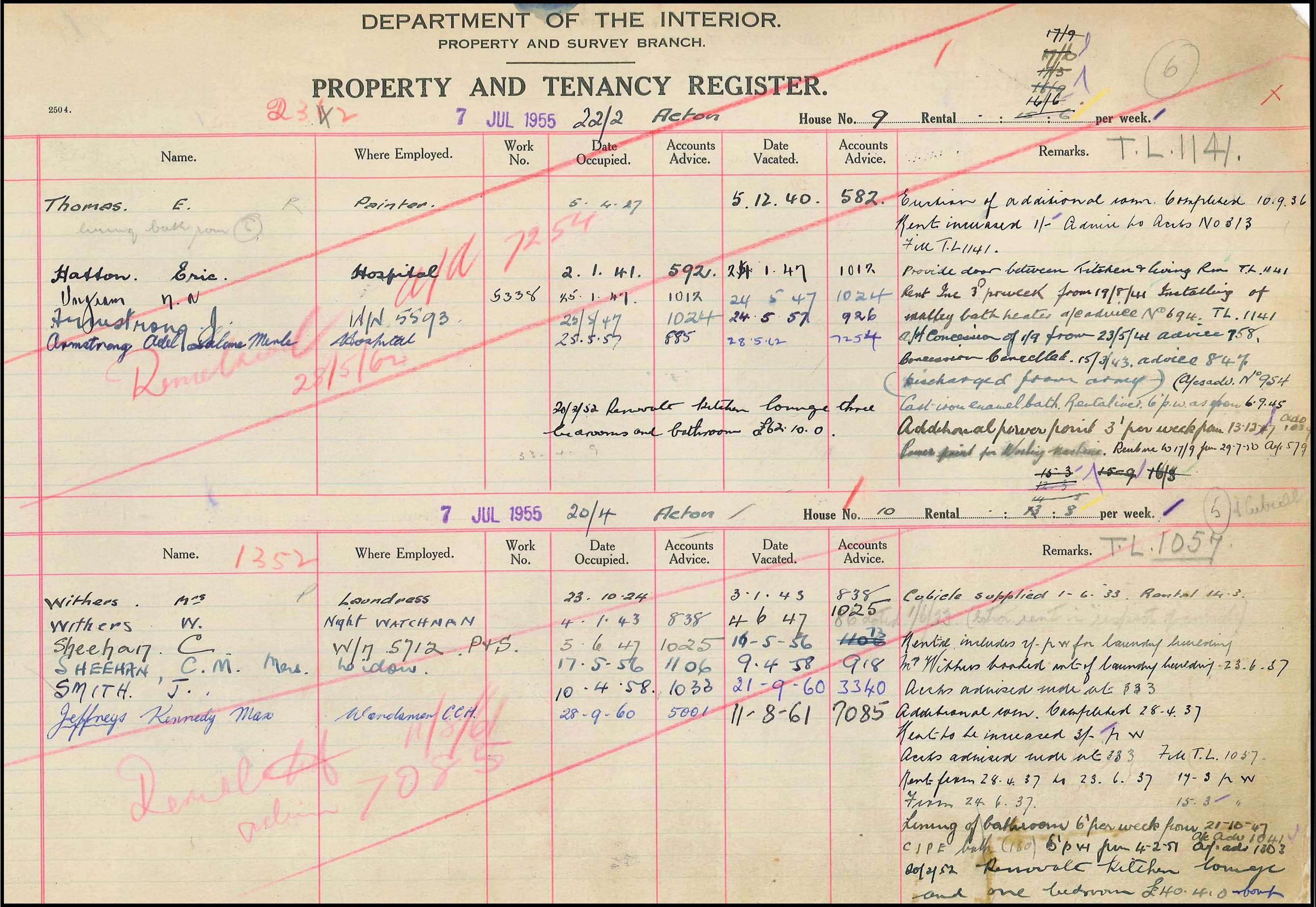 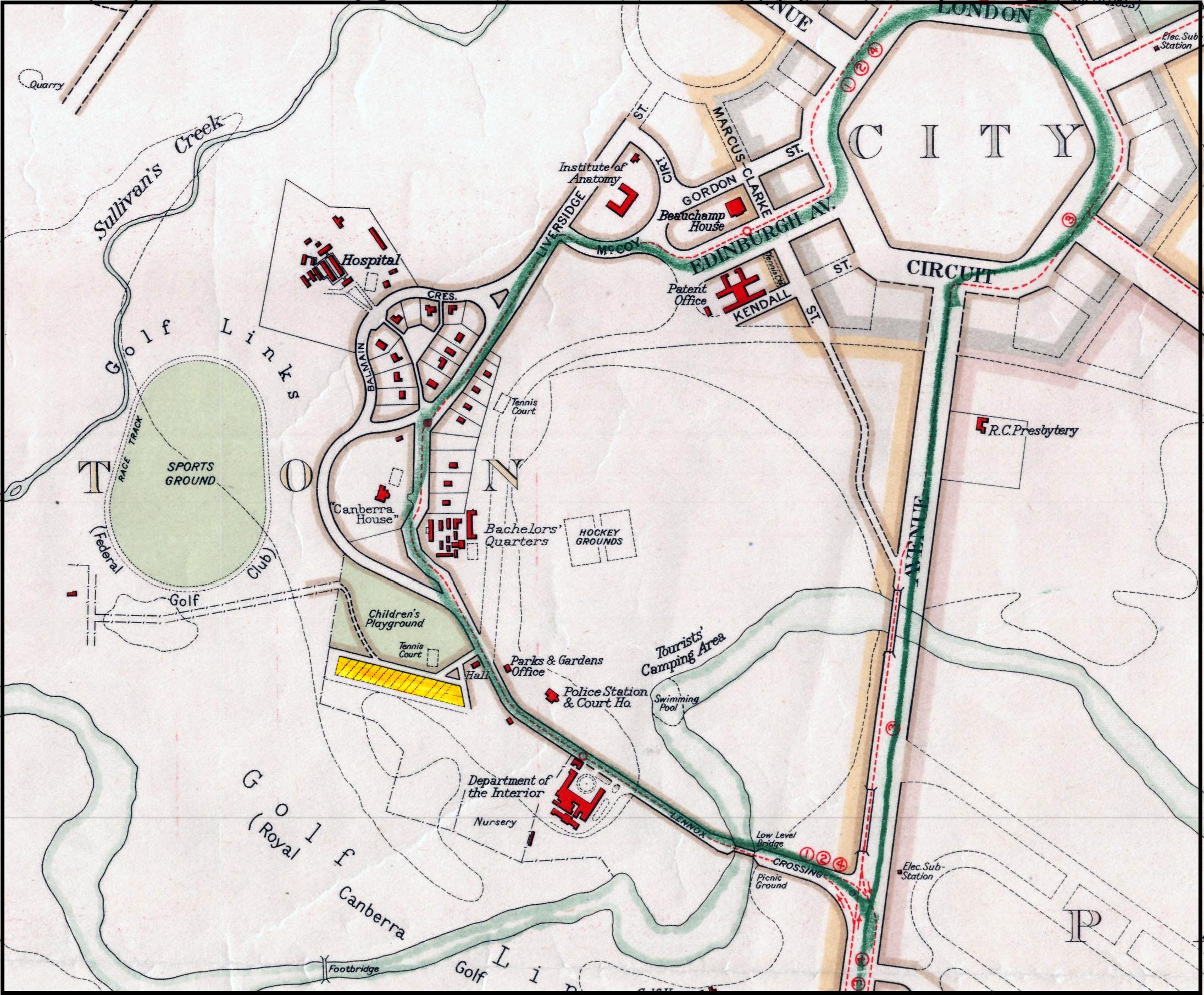 Liversidge Street and Balmain Crescent in Acton were popular locations for senior public servants and prominent businessmen and women. Chief Lands Inspector for the Federal Capital Commission James Carrington Brackenreg, and his wife Helen who opened the first City shop in Canberra and built the first private enterprise houses ii, took up residence in 7 Liversidge Street as early as 1916. They later moved across the road to No. 8 following the departure of well-known architect H M Rolland. Other residents of the neighbourhood around this time included the Secretary of the Prime Minister’s Department Percy Deane, forester T C Weston and surveyor Harry Mouat. All of these properties were later handed over to the Australian National University in the 1950s and 1960s.

Another interesting aspect to the registers is the information relating to different housing type clusters and the details that can be gleaned for specific houses. The Tocumwal houses were first erected during the Second World War as part of the Tocumwal (NSW) Royal Australian Air Force Base. The Base was built for the US Army Air Corps by the Australian Civil Construction Corps and Allied Works Council between February and April 1942, as a response to the bombing of Darwin. The houses were left empty after the Second World War and the Federal Government sought to make use of them to alleviate the post war accommodation crisis in Canberra. About 200 houses were transported to Canberra and located in Ainslie and O’Connor iii.

Detail – Architectural plans for Canberra, Tocumwal types – from the collection of the National Archives of Australia iv

The story of the relocation of these houses is quite well known, but the property and tenancy registers can provide details about the date of relocation, each building’s occupants and the date that each house was sold by the government. When used with other complimentary sources, it may be possible to compile a comprehensive house history. Volumes of registers for rural property leases are included in the collection. There is little information recorded about buildings in the rural volumes, however they do still list details of the tenants, acreages and the type of lease granted.

The digitisation of all the registers is yet to be completed, so please contact ArchivesACT by using our online form if you are not able to find a property of interest on our website.