Have you ever strolled through your garden, along your street or around your suburb and wondered why the plants you see were selected to be planted there? How long have they been there and whether they are suited to our climate? For our June Find of the Month we thought we would draw some attention to the cards and ledgers created by the Yarralumla Nursery which may help to answer some of these questions.

It has been said that Canberra’s Yarralumla Nursery 'made the national capital a garden city and also put the bush in the ‘bush capital’ i. Well before Canberra’s provisional Parliament House was declared open in 1927, detailed planning to transform the landscape of the Federal Capital Territory had begun. Charles Scrivenor, in his role as Director of Commonwealth Lands and Surveys, was preparing for an experimental nursery to be established at Acton as early as April 1912 ii. Scrivenor secured the services of Thomas Weston to set up and oversee the Acton experiments, and then to plan for a permanent nursery on a portion of land on Yarralumla station known as Sheedy’s paddock. A camp was set up in the paddock in July 1914, the forerunner to the Yarralumla Nursery iii.

Experiments need to be documented; the sources, successes, failures, methods and conditions had to be recorded. The importance of meticulous recordkeeping was not lost on Weston;

As it is absolutely necessary that a close record of all work done in connection with the Nursery and Demonstration area should be carefully kept, clerical assistance will from the outset be required. iv

This was the beginning of a recordkeeping system consisting of buff and blue coloured cards that were used to record the day to day work of the nursery for around 50 years. The cards were later complemented, and eventually replaced by, volumes of ledgers that in combination leave an enduring and rich legacy.

On a visit to the Royal Naval College in Jervis Bay in 1914, Weston spent some time strolling around Nowra when he was suitably impressed by a Pinus Insignis (Radiata Pine) on the grounds of a church. Weston later wrote to the Reverend Mr Perkins in Nowra to request that he forward a 'few cones with a view to perpetuating its type here' v. By checking the relevant nursery card, the fate of the resulting plants can be traced. The first seeds from the cones were planted later that year. One thousand five hundred seedlings produced from Reverend Perkin’s cones were then transplanted in July 1918 before being planted in various locations around Canberra in 1919.  The final planting locations included the Hall school, the Royal Military College and Southwell Park. The significant role that the Yarralumla Nursery has played in Canberra’s development as a liveable city can be revealed by browsing through the cards and ledgers. Many other Pinus Insignis, as well as other species, were produced for the ‘East-West Shelter Break’, better known now as Haig Park.

Much of the land that was previously used for grazing livestock in the Canberra region is now heavily forested as a result of the planting of eucalypts that were propagated at the nursery. In 1919 J H Maiden, the head of the Botanical Gardens in Sydney, reported that;

we are . . dealing with a largely treeless area whose silvicultural conditions, as regards any large number of species, are almost unknown, and data is being laboriously ascertained by the Officer in Charge of Afforestation on the spot. His methods of keeping his records are quite in advance of planting records in Australia, and probably in most other countries’.vi The nursery cards include details on the trees that now form the Cork Oak Plantation at the National Arboretum. It seems Walter Burley Griffin was keen to have the Quercus suber (Cork Oak) tested in the Federal Capital Territory, so arranged for 220 acorns to be procured from the Melbourne Botanic Gardens. The Yarralumla Nursery wasted no time in putting them to the test, sowing the acorns in May 1916, just two days after they had been received. On the 8th of November their germination was considered to be ‘splendid’ and they were then planted in the Cork Oak Reserve in October of the following year. 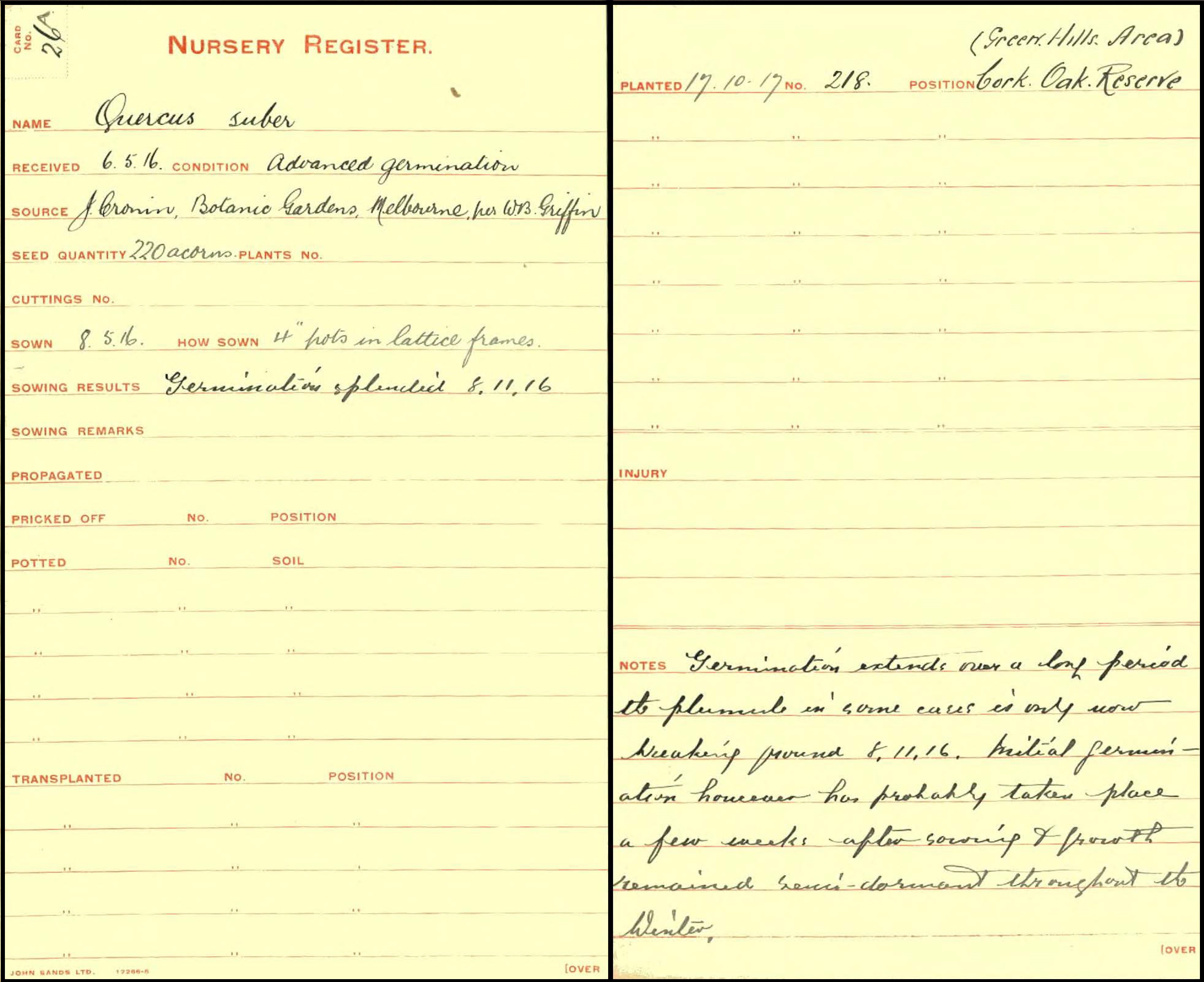 Following Weston’s retirement in 1926, Alexander Bruce took over as Superintendant of Parks and Gardens. John Hobday, who Weston had employed when the Yarralumla Nursery was first established, then succeeded Bruce in 1935. The nursery ledgers were first raised thirty years after Weston started recording species information on the cards. Lindsay Pryor, taking over from where Weston left off, began recording the seeds and cuttings he collected around the world – and from the streets and parks Weston had planted.vii Pryor became well known for his work with eucalypts and was instrumental in establishing the Australian National Botanic Gardens. Much of his work in 1947 involved extensive overseas travel, collecting samples while on tour that are recorded in the first volume of the ledgers. The practice of recording details of samples collected on cards didn’t cease when the ledgers were introduced, although their format was altered. The cards continued to be used to record activity until the 1960’s and many of them can be cross referenced to information recorded in the ledgers.

The cards and ledgers from the Yarralumla Nursery covering the years up to 1996 were digitised in 2011 with the assistance of the ACT Monaro and Riverina Branch of the Australian Garden History Society, and can be easily accessed by visiting our website. They may help to answer some of the questions and learn some of the history about the species of plants that play a big part in making your neighbourhood what it is.

i. Nursery Tales for a Garden City; The Historical Context of the Records at Canberra’s Yarralumla Nursery. Lenore Coltheart; Canberra 2011 p. 5.

1 – ArchivesACT: from file G/779 – Tennis Courts General File. Detail from Plan of Canberra the Federal Capital of the Commonwealth of Australia.