The little engine that could 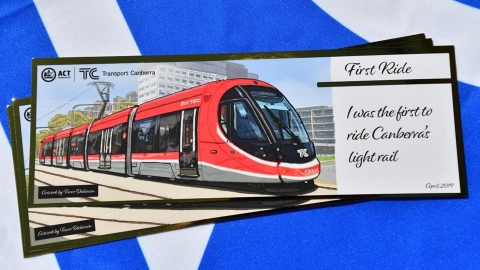 Transport Canberra memorabilia from the launch of the light rail 2019

With the initial excitement of the opening of the light rail system behind us, we thought it might be interesting to look back to the 1980s when the now established ACT Government turned its thoughts towards transport solutions to suit the needs of our growing city. The development of Gungahlin and its anticipated population growth was the impetus the Territory Planning Authority needed to revisit an ambitious idea that had always been bubbling along in the background, the implementation of a light rail system along the transit corridors of Canberra.

Light rail first became a feasible option in the 1990s, but it wasn’t the only transport option we were researching. Next time you take the light rail, as you career along the tracks, take a moment to consider that you might instead be hanging from them… in the carriage of a monorail! You could also be rattling along in a trolley car or taking in the sights with tourists through the windows of a heritage styled tram.

Public debate over the implementation of light rail in Canberra has been widespread for a good part of the last decade and for this reason records regarding light rail and other transit options are ArchivesACT’s June Find of the Month. 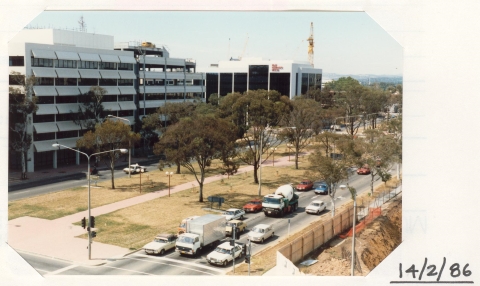 Paved paradise and put up a parking lot

The environmental impact of energy use is undeniable, as is the need for people to move around a metropolitan area. In the 1980s, finding a suitable balance of the two, that is sustainable, cost effective and customer focussed was always going to be challenging. The cost to the environment per user is significantly reduced by using public transport – a study in 1981 found the average energy consumption of a sedan to be 1,580 kilojoules per person, whereas a passenger on a double decker electric train would only use 28.1 kilojoules. Anyone driving along Northbourne Avenue over the last year would have seen Transport Canberra’s banners and maps sharing Griffin’s original design plan for rail along this route. Griffin’s dream has motivated both government and local business to undertake feasibility studies on rail transport options.

In 1989 in a submission to the Conservation, Heritage and Environment Standing Committee, ACTION raised its concerns that urban sprawl made the delivery of transit services difficult. They recommended that land planning instead focus on the inclusion of employment centres and medium or high-density housing along known transit corridors (specifically along bus route 333, for the information of long-time Canberrans) as this would allow them to operate more efficiently with less environmental impact. Once these corridors were established they suggested that the increased patronage would allow the government to pursue alternate modes of transport, including light rail, trolley buses, monorails and electric buses.

In 1989 a review of the Metropolitan Plan for Canberra by the National Capital Planning Authority and the Interim Territory Planning Authority reflected ACTION’s position. Based on an anticipated population of 500,000 it considered how this growth could affect transport systems in Canberra. It found that although the major arterial roads would be fit for purpose, the current town centres could not continue to provide adequate parking facilities. It concluded that changes to land planning were necessary including an increase to dwelling density, the development of large employment centres and emphasis on developing transit areas of high accessibility. 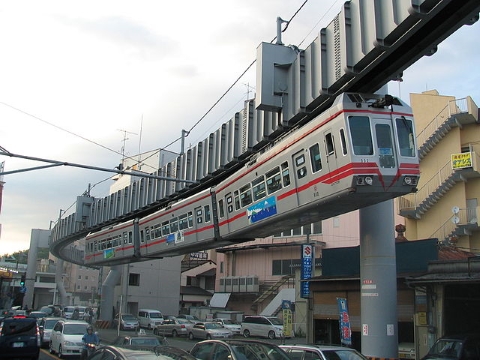 Even the word ‘monorail’ conjures up an air of excitement, however, despite being around since 1901, they have never really taken off as a form of public transport. In the late 1980s there were a couple of notable exceptions – the Harbour Link in Sydney, and an urban line at Kita Kyushu in Japan. Monorails comprised two basic types, with cars either straddling on tracks or hanging from a beam. Operation is quite simple. With usually a single track in each direction or simply a continuous loop, monorails don’t even require cross-over tracks. Given their simplicity why weren’t they recommended as an option over light rail you ask? The answer is simple. Cost. While the operation was easy, the complexity of installation involved high capital costs with no significant gain compared with other electric options such as light rail. 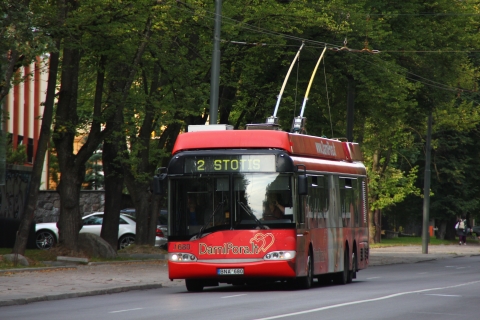 If a tram and a bus were to procreate their offspring would look something like a trolley bus. It has rubber tyres, and the chassis and body of a bus, but like a tram it draws power from overhead lines. Trolley buses are used quite widely and are effective in certain environments. They are plodders and work exceptionally well in cities with steep hills, and they are also environmentally friendly. Found in many countries around the world, probably the best known are the trolley buses of San Francisco which often feature in movies. The problem with trolley buses really comes down to their small capacity, slow pace and fixed routes.  They are best suited to difficult routes, not as a high capacity transport option. Capital costs are also quite high, and although their running costs are low compared to buses, other costs are higher as they require the maintenance of overhead lines.

On a midnight tram 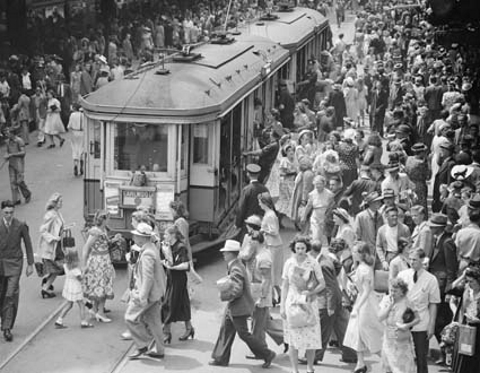 A crowd of people around a tram in Pitt Street, Sydney, 1949

A proposal from the Dickson Tradies Club in 1984 suggested that a heritage tram line be installed between the showground and the city. There were some acknowledged benefits to this approach. Trams are environmentally friendly, they evoke sentiment and were at the time gaining in popularity as a tourist activity in other cities.  However, despite their pull as a tourist attraction, the benefit of implementing the tram lines simply did not outweigh the costs. Although they were described as ‘quaint’ they were considered not suitable as a transit solution. It was suggested instead that at some point a tram line may be suitable on the less used route between the National Museum and the city.

Light rail was long on our radar as a transit solution that could offer significant long-term benefits for Canberra. The list of advantages is lengthy. Operation costs are low, and light rail can achieve decent speeds whilst remaining relatively quiet.  Light rail also has a smaller environmental footprint than buses, and even has the capacity to meet future growth by simply adding more carriages. Furthermore, it has a proven track record of popularity with commuters, with global reports of an increase of uptake wherever light rail has been implemented. Light rail was certainly a long time coming to Canberra, but it could be argued that the public debate, feasibility studies and the urban planning lessons learnt along the way were crucial in developing a transit system that could provide Canberrans with the most efficient, environmentally friendly system that is both effective now and future proofed to suit our growing transit requirements. Were you part of this historic project? Did you line up for a ride on the opening day?

Drop us a line at archives@act.gov.au or tweet a photo and don’t forget to include @ArchivesACT.