With recent media reports about a potential rabbit plague as a result of the wet weather over the past 6 months, ArchivesACT coincidentally came upon the 1945 file 'A3106/269 – Advisory Council – Rabbit Destruction: Rural Leases'.

Rabbits were introduced to Australia by early settlers who released them onto their properties throughout the 1800s.  This was done for the purpose of hunting and food.  By 1890 they had reached plague proportions due to a lack of predators so measures were introduced to reduce their numbers.

The book ‘Canberra 1820-1913’ by Lyall Gillespie describes newpapers of the time reporting:

At that time this region was covered by New South Wales state legislation with the relevant acts being:

These acts remained in force after the ACT was established under Section 6 of the Seat of Government Acceptance Act (Cth) 1909.  The first legislation introduced for the ACT in regards to rabbit control was the Rabbit Destruction Ordinance 1919. This ordinance carried through with amendments until 1997 when it was repealed by the Land (Planning and Environment) (Amendment) Act 1997:

For people who wished to keep rabbits as pets, Section 38 of the Rabbit Destruction Ordinance 1919 allowed for this as follows:

'38. Any person who, without lawful authority (proof whereof shall lie upon, him), wilfully liberates or attempts to liberate, or has in his possession any live rabbit (whether within a proclaimed rabbit-infested district or not), shall be liable to a penalty not exceeding one hundred pounds for every such offence ; but nothing herein contained .shall be construed to prohibit any person from keeping live rabbits or hares in any safe enclosure with the permission of the Minister first had and obtained.'

This allowed the Minister to introduce regulation and licensing of pet rabbits under the Rabbit Destruction Regulations. This has been documented in file '77/1172 – Government Branch – Proposed Rabbit Destruction (Amendment) Ordinance': 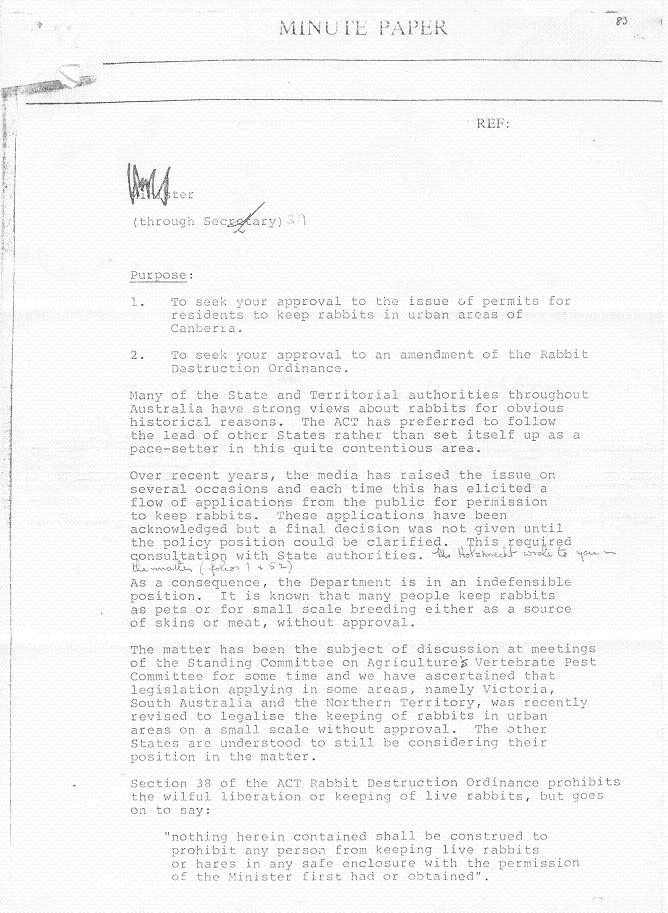 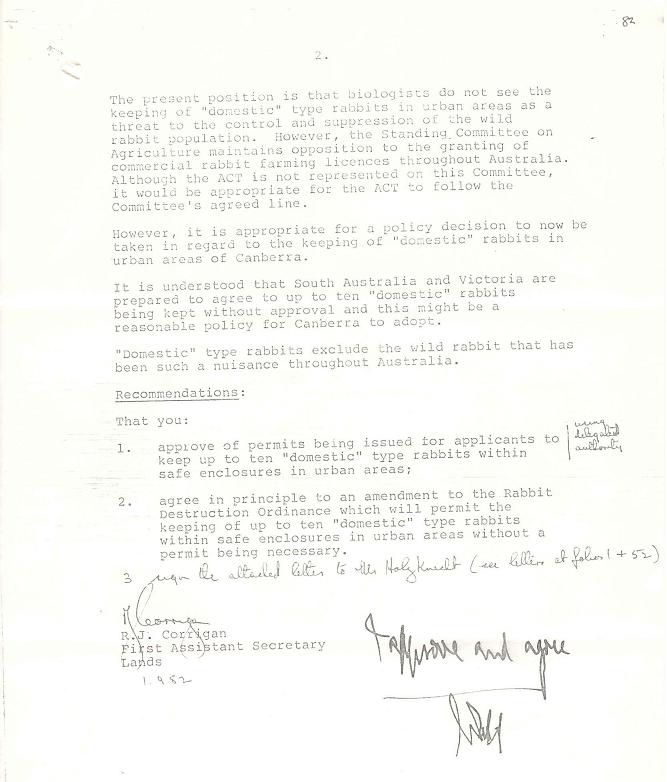 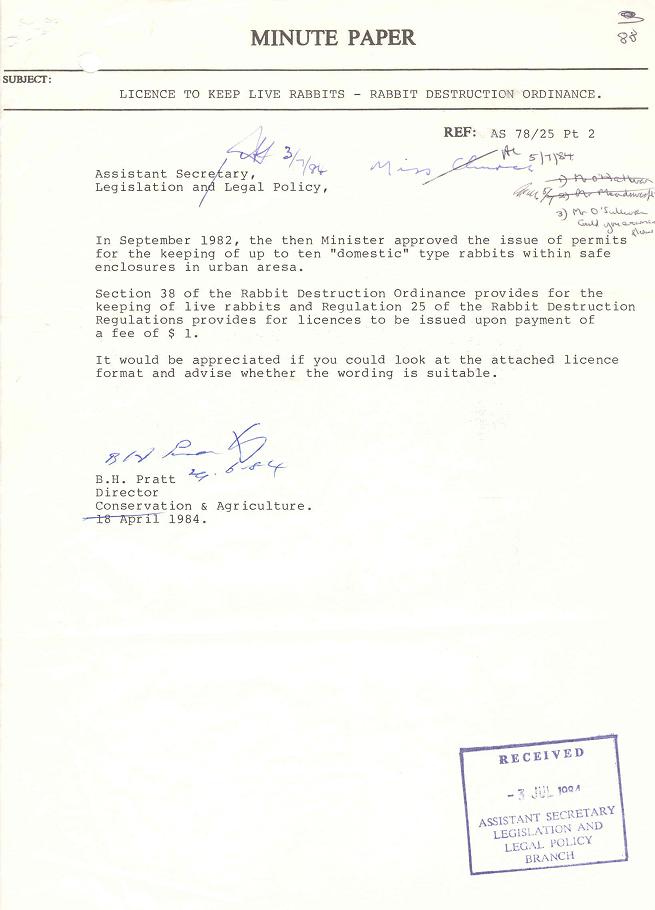 The licensing of rabbits created a problem for the Canberra Rabbit Club during the 1983 Canberra Show as the following transcript from '77/1172 – Government Branch – Proposed Rabbit Destruction (Amendment) Ordinance' records: 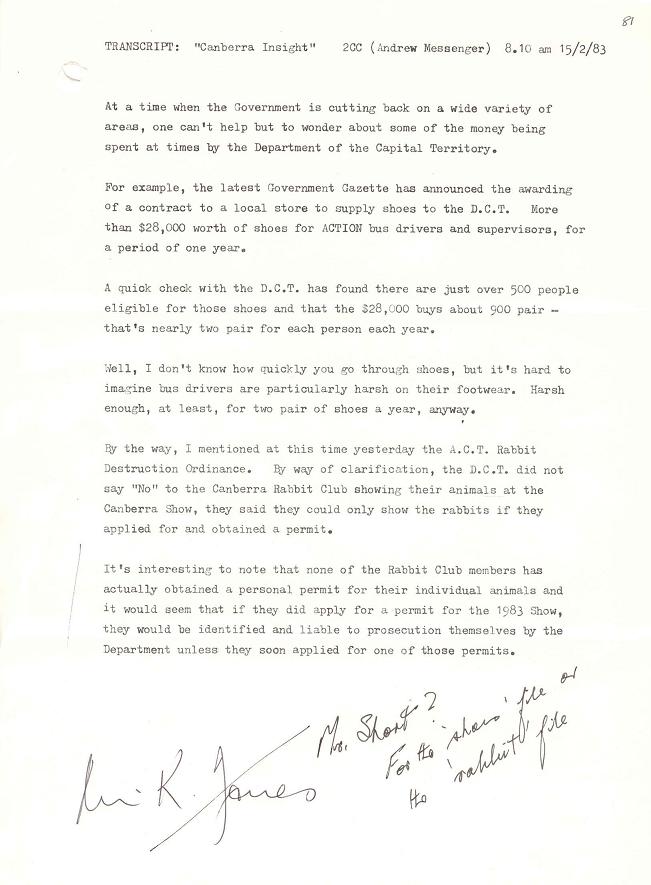 The Rabbit Destruction Regulations were also repealed by the Land (Planning and Environment) (Amendment) Act 1997.  The current legislation, Domestic Animals (Fees) Determination 2010 (No 1) only covers the licensing of cats and dogs:

The following is a list of files covering the Rabbit Destruction Ordinance documenting some of the amendments made to the ordinance:

It is also common to find mention of rabbit numbers within inspection reports of rural properties, for example in this folio from the file 'TL2747 - Block 18 Booth - J. Oldfield'. 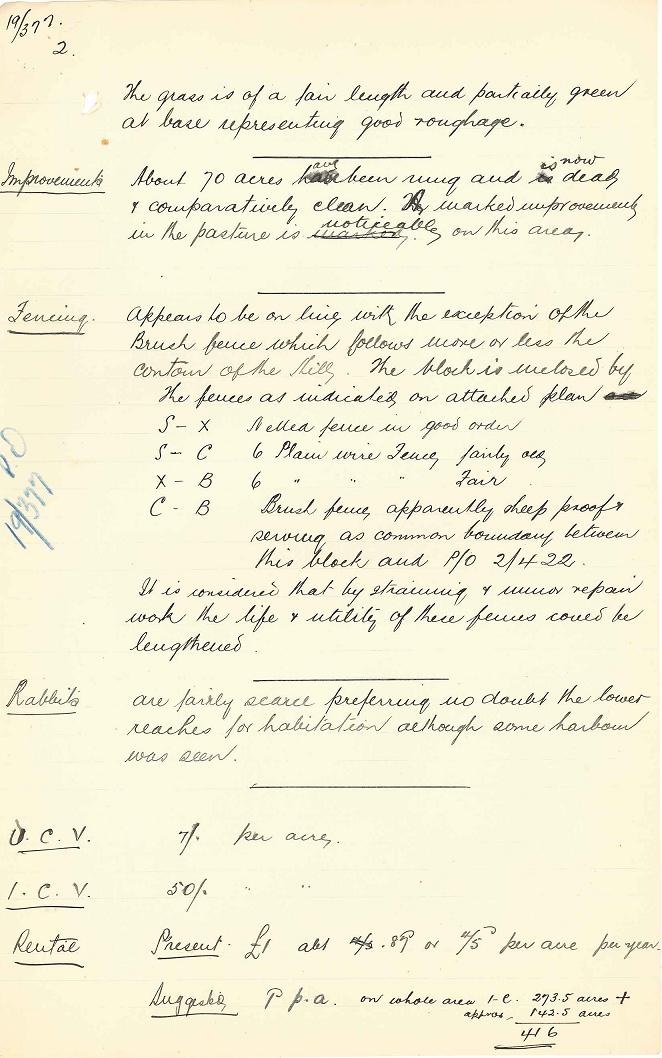