The Petrov affair was the most dramatic incident to involve Australia during the cold war. Soviet diplomat and Chief of the Ministry of Internal Affairs (MVD) in Australia Vladimir Mikhaylovich Petrov defected on 3rd of April 1954. After the death of Josef Stalin in March 1953, purges of the old regime were taking place. Petrov was fearful that he may also suffer when leading up to his recall to the USSR in 1954.

Petrov made contact with ASIO through part-time agent Dr. Michael Bialoguski whom he had befriended a few years earlier. He was introduced to senior ASIO officer Ron Richards who offered Petrov asylum and £5,000 in exchange for all the documents he could bring from the embassy.

Petrov kept his intention to defect a secret from his wife, Evdokia Petrova, fearing she could suffer at the hands of the MVD. Shortly after his defection MVD couriers came to Australia to forcibly escort Evdokia back to the USSR. Prime Minister Bob Menzies sent ASIO agents to Darwin to escort Evdokia from the plane during a fuel stop and gave her the option to defect or return to the USSR. She also opted to stay.

We recently came across the file 'DC 290 - Soviet Embassy (Staff)' which has the car registration papers for Vladimir Petrov’s green 1951 Skoda. From this file we can see that he obtained the car from J. Pakhomov who Petrov replaced as Chief of the MVD in Australia. 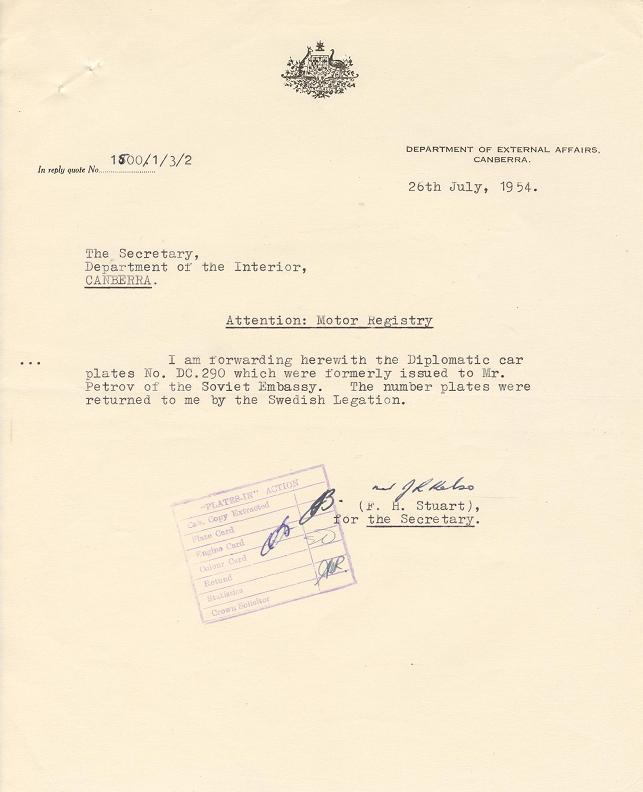 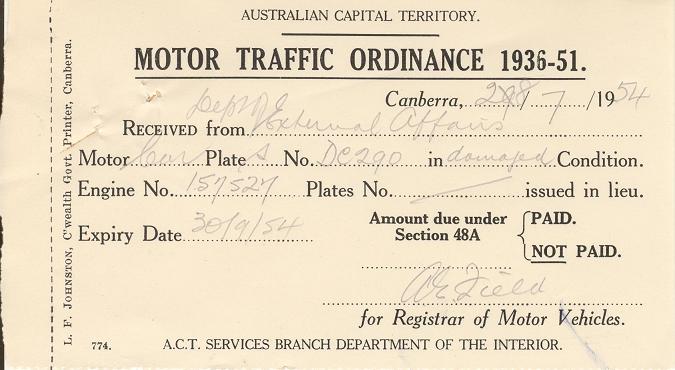 As to the fate of the car, according to the following articles in the Canberra Times it was involved in an accident a few days before Petrov’s defection. The articles state that he was forced off the Cooma Road by a truck causing the car to roll and burst into flames. It was suggested at the time that it may have been an assassination attempt.

It is interesting to note the letter dated 26th July 1954 that the cars number plates were returned to the Department of External Affairs by the Swedish Legation. The Swedish Legation even looked after the Petrov family dog, Jack.

From these and other newspaper articles from the time, it appears that the Swedish Legation were being used as an intermediary between the Australian and Soviet Governments after the Soviet Embassy was closed on the 29th of April 1954.  The Embassy was reopened on the 4th of June 1959.

In 1956 the Petrov's became Australian citizens settling in Melbourne under the psuedonyms Sven and Maria Allyson.   Their dog Jack was also returned to them.